Conservatives wanting it both ways, always

A lot less of my life is spent gazing at magazine racks while waiting in line lately, so I would have totally missed this Life & Style cover if Bitch Blog hadn't covered it: 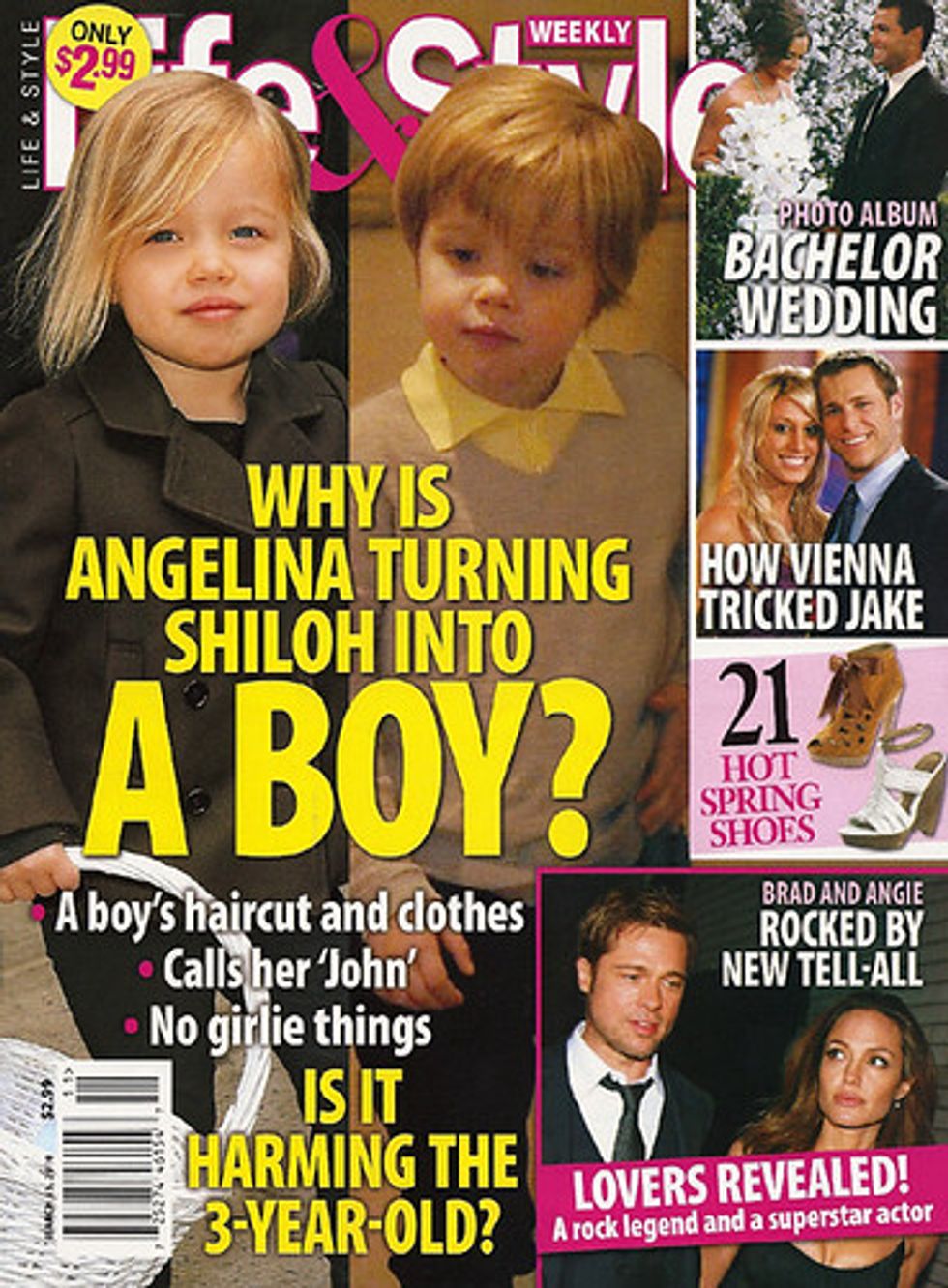 I don't know about the calling her "John" thing---according Andi, all the info they have appears to be that the little girl is dressing like a tomboy---but even if they are letting her call herself by another name, I have to point out that a lot of little kids go through that phase. My sister insisted for something like two months that we call her "Michelle" when she was around this age. But apparently, the entire story is hyperventilating gender panic. Andi discovers that Life & Style is using Focus on the Family as expert testimony now:

Says FotF’s Glenn Stanton, “Little girls have never been women before. They need help, they need guidance of what that looks like.”

I had always thought of the baby bump-watching, wedding-slobbering tabloids as patriarchy propaganda, so I suppose moving into hyperventilating hyper-reactionary crap is the next step.

But what's really interesting to me is that social conservatives want to have it both ways---they argue both that gender is innate and unchangeable, and that it's learned. When feminists criticize domestic sexism, conservatives are all about how gender roles are natural and fixed---and in complete opposition to each other. That men are naturally boorish pigs and women are naturally nurturing, so women who resent being told to nurture people who can't even be expected to show gratitude are bucking nature and need to learn to live with our debased roles. But then they turn around and say things like Stanton did, which is basically to admit that femininity (they also believe this about masculinity) is a learned behavior, and not only that, but it's a long, hard process learning your gender. You'll hear from conservatives that boys are naturally drawn to trains and girls to dolls, and then they'll flip around and tell each other that it's extremely important to steer your children towards the "right" gender roles.

Their homophobia is clashing with their sexism, and showing how intellectually bankrupt both positions are. Social conservatives portray homosexuality as a "choice"---which makes sense. They want gays to get in the closet, and they're just portraying that as authentic heterosexuality. But in order to argue that it's a choice, you have to position homosexuality as a serious temptation and gays as simply very weak people who give in. If you buy into that argument, then you start to see homosexuality as a temptation that preys on all people, and your job as a parent becomes about shoring your child up to resist that temptation. Focus on the Family has long taught its followers that homosexuality can be warded off with strict teaching of gender roles. In other words, they've been forced to make explicit what they've always pretended wasn't true, which is that gender roles are learned and performed. The irony is that the one avenue where they'll admit gender roles are learned is the one avenue where they're not actually going to have as much influence as they think. Forcing a little girl who wants to be a tomboy into dresses is not going to make her not be a lesbian, and also that many lesbians prefer to present a feminine manner to the world. And a lot of little girls allowed to be tomboys grow up straight.

It's fascinating, because this contradiction social conservatives carry around---where they claim gender roles are natural while expending tons of effort into teaching them---usually goes completely unacknowledged. Despite the fact that publishing especially makes unbelievable amounts of money teaching gender, from women's magazines to dating manuals, people love to front like men and women's roles are inborn (and heterosexual). I suppose open acceptance of homosexuality has thrown a wrench into the works, because it suggests perfectly healthy people can reject assigned gender roles, even when it comes to something as fundamental to mandatory gender roles as who you sleep with.