'Ebonics' is back & the DEA needs nine linguists fluent in it

I thought this shite was dead and buried, and now here we have the resurrection of 'Ebonics.' You might recall that this was the nonsense perpetrated by "well-meaning people" in Oakland back in the 1990s to recognize the slang used in black neighborhoods as language or dialect.

This has now reached an epic level of FAIL in the administration of the first black President as the Drug Enforcement Agency is officially hiring for agents fluent in "Ebonics." Jonathan Capehart at the WaPo tipped me off on Twitter:

@CapehartJ Oh jesus, you are not kidding me. #Ebonics is back. (hangs head).

RT @Pam_Spaulding: @CapehartJ Oh jesus, you are not kidding me. #Ebonics is back. (hangs head).//WORD. 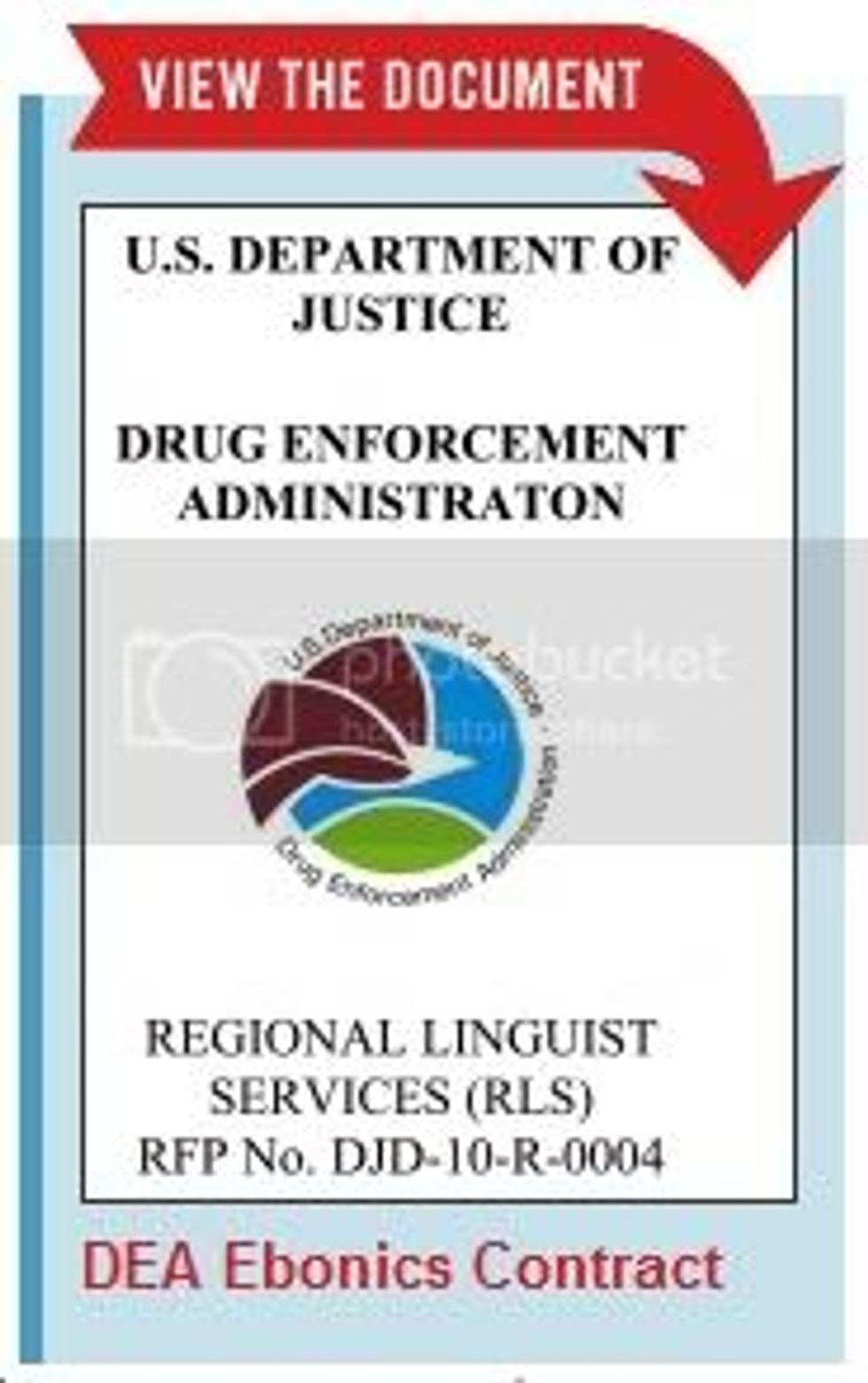 So I clicked over to the source material Jonathan cited, the always-interesting Smoking Gun, and no, it's not a joke.

AUGUST 23--The Department of Justice is seeking to hire linguists fluent in Ebonics to help monitor, translate, and transcribe the secretly recorded conversations of subjects of narcotics investigations, according to federal records.

A maximum of nine Ebonics experts will work with the Drug Enforcement Administration’s Atlanta field division, where the linguists, after obtaining a “DEA Sensitive” security clearance, will help investigators decipher the results of “telephonic monitoring of court ordered nonconsensual intercepts, consensual listening devices, and other media”

The DEA’s need for full-time linguists specializing in Ebonics is detailed in bid documents related to the agency’s mid-May issuance of a request for proposal (RFP) covering the provision of as many as 2100 linguists for the drug agency’s various field offices. Answers to the proposal were due from contractors on July 29.

Holy crap. This is so absurd that I cannot believe I'm reading this. Slang and pronunciation common to "the black community" (whatever that is) is not a language; in fact if we're going to even entertain the subject of "Black English" -- it doesn't deserve it, but let's "go there" -- how can you determine what it is? Slang and pronunciation are highly regional, cultural, and constantly changing just like fashion. How the F can you recruit for that? And, as Jonathan noted:

First, of all, it ain’t even a real language. A dialect? Sure. But a language like Spanish, Vietnamese or Korean, which the Atlanta office also needs help with? Seriously? Then that would make me and other African Americans you know bilingual. After all, I can lop off words and run them together with the best of them when 1. I’m comfortable with you and think you can hang; 2. I’m with family, 'cause that’s how we talk; or 3. I’ve had a third martini -- and I don’t care.

...I have three questions. How is proficiency measured? Who does the testing? What are the courses like? Last I checked “Ebonics” was not offered by Berltiz or Rosetta Stone. But I must say I’m impressed with the DEA’s moxy. Or is it chutzpah? As Mrs. Cleaver said, “Chump don’ want nah help, chump don’ get da help.”