Six years ago, Louis Marinelli sat down in his dorm room at the University of Northern Iowa and, as many college students do, started a Facebook group.

"Protect Marriage: One Man, One Woman," he named it, then watched it grow to more than 280,000 contributing members. A few years later, in the summer of 2010, Marinelli would be crisscrossing the country, driving an RV for the National Organization for Marriage's Summer for Marriage 2010 tour and making practice of calling homosexuals "abominations" with "deviant" habits.

When he created that Facebook page, and when he first boarded that RV emblazoned with pictures of happy hetero families and wedding bands on the side, he had no idea that he would be publicly declaring his support for same-sex marriage and turning in his resignation to NOM on April 8, 2011.

He most certainly had no idea that the very "abominations" he had been shouting down online for the last half-decade would be the reason he changed his mind.

"It's about the greater good," he told Raw Story. "Doing the right thing, in my opinion, is to ensure that every American has equal rights and the freedom to marry. Is it more important to preserve my friendship with NOM and stay good with them, or is it more important for my neighbors to have their rights? Their rights are more important than preserving myself, and my livelihood."

Marinelli has unleashed a barrage of insider information about the conservative NOM through blog posts in the last week.

In addition to "coming out" in support of same-sex marriage, Marinelli has blasted NOM by exposing its small base of support and leaking its plans to create what he calls a propaganda program — which Marinelli claims he was slated to lead.

To understand how this man went from literally driving the bus to help prevent same-sex marriages to embarking on a crusade for equality, you first have to understand how it began.

"I have to this day a kind of Cinderella-like image of what I want my marriage to be like," he said. "I want a family, I want my bride to have a Tiffany ring. I want a very traditional style and setting of a wedding."

Worried that same-sex marriage would turn marriage into merely a social contract, Marinelli looked for a group that focused on keeping the legal of definition of marriage as a union between a man and a woman.

"I extended that to the point where it was the only valid type of family that should exist. I saw the legalization of same-sex marriage as something that would tarnish that."

Rather than have his sterling daydream tarnished, Marinelli created Protect Marriage, the first conservative group focusing solely on marriage, as he recalls. He was savvy with social media, working his blog, Facebook, YouTube and Twitter to a following of nearly 300,000.

NOM was founded in 2007, but didn't hit Marinelli's radar until 2008, when he started working in tandem with the group. All donations made to Marinelli's Protect Marriage group were transferred to NOM's education fund, and Marinelli and Brian Brown, NOM's president, were in touch. Last spring, Marinelli noticed that NOM's social network was somewhat anemic.

By then, Marinelli was peppering his writings with the "research" of Paul Cameron, which claimed that homosexuals had shorter lifespans (the American Psychological Association, the American Sociological Association, the Canadian Psychological Association and the U.S. District Court of Dallas have all disavowed Cameron for misrepresenting his gay and lesbian subjects; the ASA issued a statement that said, "Paul Cameron is not a sociologist"), and had turned the dial up on the rest of his anti-gay rhetoric, including claiming that LGBT people were "hijacking the civil rights movement" and only cared about themselves. 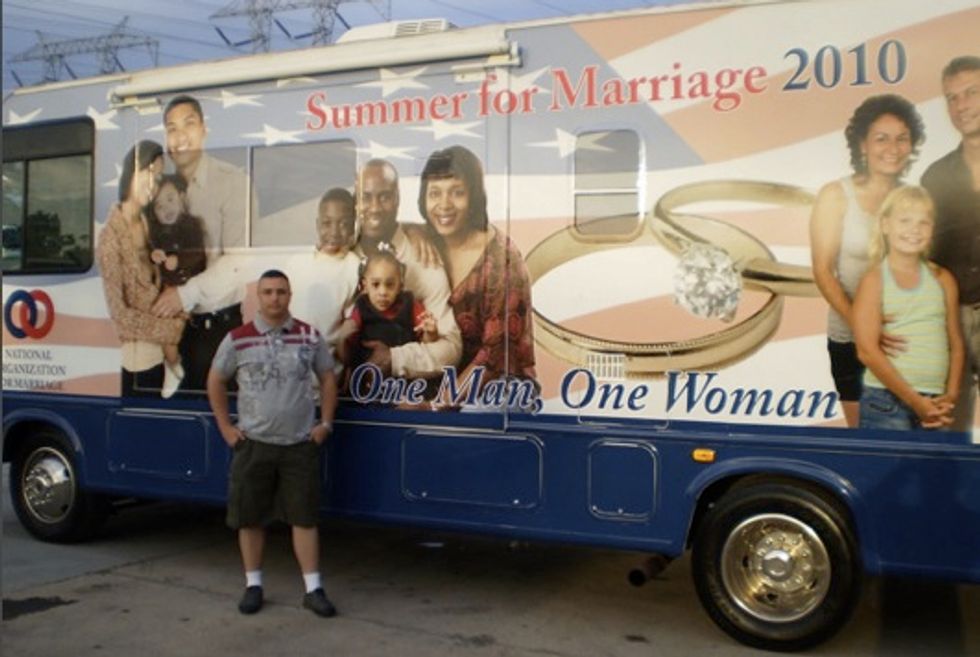 Marinelli masterminded and routed NOM's summer bus tour, climbed behind the wheel and away he went, essentially his first time working as an activist out in the field instead of online.

He started the tour on a high, but by August something began nagging at Marinelli. In St. Louis, he took a break from photographing the counter-protesters that showed up to every rally and sat on a bench to soak up the sunshine. Anthony Ash, a man with the pro-equality Courage Campaign who had been following NOM's tour and shoving cameras in Marinelli's face at every chance, sat down next to him — no cameras, no tape recorders. The two sat in the sun and chatted for a few minutes.

"I began to understand that this person was directly and negatively affected by my work," said Marinelli. "I was able to put a face on the issue. No longer did I have just a nameless political opponent without a face."

The spool had begun to unravel.

On the tour's next stop, in Atlanta, turnout for the rally was much lower than Marinelli had expected, and the counter-protest across the street was roaring. Marinelli began taking pictures of the crowd, as he did at every stop, but lost heart in the face of the hundreds of people standing to oppose him.

"They were just inspiring," he said. "They presented themselves as highly inspiring, and that was the first time I thought to myself, 'What am I doing here?' I walked away from them. I realized they were right and I was wrong, and what we were doing was wrong."

The seed of doubt that had been planted over the summer had blossomed into a need for Marinelli to take action. While still working for NOM, he changed his blog's focus from marriage to conservative issues as a whole, and took back the administrative reins to the group's Facebook page.

He even quietly arranged an interview with Jeremy Hooper for his LGBT politics site, Good As You — a coming-out, of sorts — and asked him to hold it until the time was right. In the meantime, he began leaking Hooper tips on NOM's hypocrisies and tactics.

Hooper said he was skeptical of Marinelli at first, but he "completely proved himself as someone who was really big on honor and trust."

Marinelli had to trust Hooper as well: "He gave me this information with the understanding that he would lose his job if I went public with it," Hooper told Raw Story.

While Marinelli searched for the perfect exit strategy — and a new source of income — Hooper waited until he could wait no more. After Maryland's House failed to find the votes to pass a same-sex marriage law, Hooper put the pressure on, unable to bear the thought that Marinelli's story may have changed a few minds in the House and yielded a victory.

Today, Marinelli says he'd "like to make reparation on the past [and] pay for some of the damage I've done."

He's making himself available to equality organizations, and has already sent out a fundraising email blast for Courage Campaign, encouraging people to donate as little as $5 for each year he worked with NOM. Committed as he now is to "the greater good," as he says, it's somewhat surreal for Marinelli to now work with the counter-protesters he photographed last summer.

"I’ve spent so long attacking these people, to be honest, but 95 percent of the responses I’ve received have been positive," he said. "They’ve been nothing but kind and supportive. It’s surreal that they would come to my support when I’ve been the complete opposite for them the last five years."

There are also rumors of NOM filing suit against Marinelli, but he made sure to obtain and review a copy of his privacy agreement with the organization before resigning. Hooper doesn't think NOM "has a legal leg to stand on."

If they do, however, Marinelli has three words for them: I'm not afraid.

"If they want to go after me, that’s their agenda," he said. "They like to sue, and they always have something up their sleeve. I was contacted by Brian Brown, who said that the statements I’ve made are a violation, he thinks. I think it’s intimidation and they want me to be quiet. By emailing me and telling me they’re considering legal action is a way to try and get me to hesitate before I speak again. I’m not afraid. I’m dedicated to helping the cause of marriage equality. I don’t think we’re going to win by being confidential about the truth. If I can help millions of people earn their civil rights, that’s what I need to do."

NOM did not respond to Raw Story's requests for comment.

Brian Brown, NOM's president, has only made one public statement about Marinelli's departure, in a blog post announcing the organization's new Facebook page.

"Louis Marinelli worked in a volunteer capacity as a bus driver during our summer marriage tour," Brown wrote. "Around this time, NOM began to pay him as a part-time consultant for helping us expand our internet reach. He has since chosen a different focus. We wish him well."

Marinelli unpublished his popular Facebook page last week, leaving NOM to start from scratch. They had less than 600 "fans" at time of this story's publication, and the majority of posts on their wall were pro-equality.