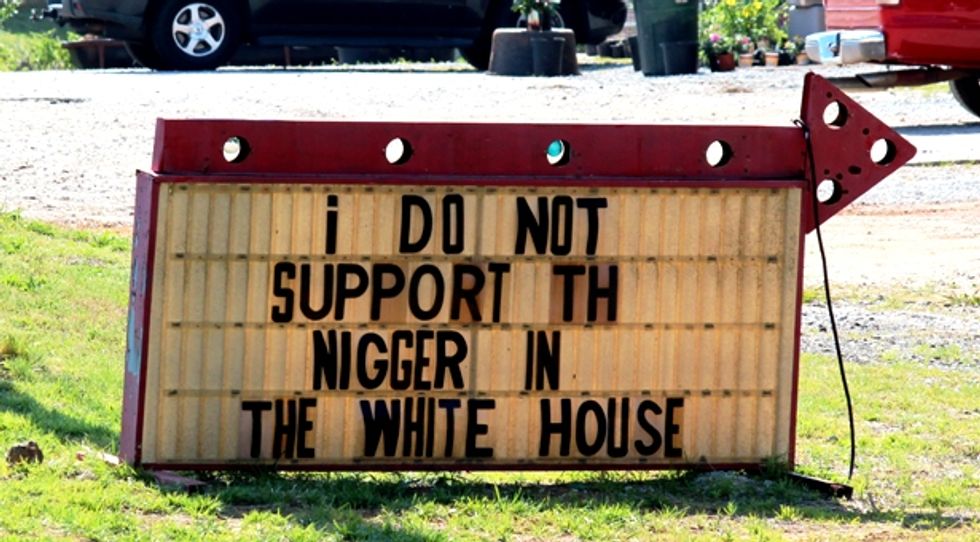 Georgia Highway 113 is like many state highways in Georgia, mostly two lane roads that twist and turn through farmland and past old homes sitting on large plots of land.  These roads are essentially the only way to reach some isolated communities that are far from the interstate.  Georgia 113 is exactly the same as the others until you reach an unincorporated area which straddles the Haralson and Paulding county line.

“Unincorporated Draketown” reads a tiny sign that indicates you have reached yet another enclave.  It is exactly what one might expect: an abundance of pine trees and pickup trucks.  Honestly, it is absolutely beautiful.  There are churches and a small convenience store.  Suddenly, there are two buildings which are obviously commercial establishments, as you get closer to the buildings, you see it.  It being at first a normal country sign with an arrow and some words.  As you draw closer, the words become clear.  The sign reads: “I DO NOT SUPPORT TH NIGGER IN THE WHITE HOUSE.”

Welcome to the Georgia Peach Oyster Bar, A twenty-six year old Draketown establishment owned by Patrick Lanzo.  The website for the Georgia 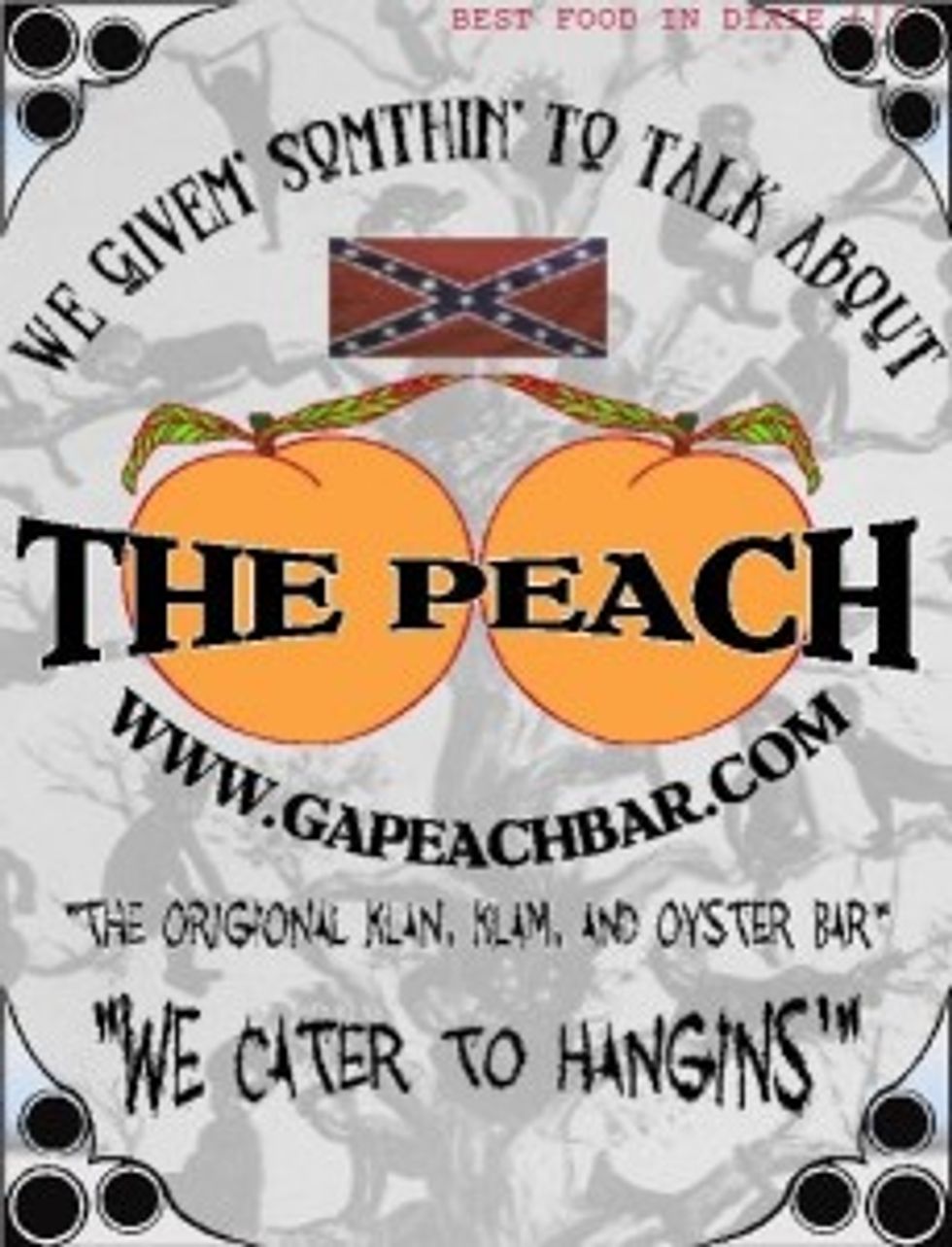 Peach Oyster Bar claims the bar is the “original klan, klam, and oyster bar.” The menu includes the phrase, “we cater to hangins.” Is this a bit of Southern hospitality for the weary traveler? When questioned about the website and the menu, Mr. Lanzo scoffed at the notion. He said, “I had a friend help me with my website and she put that Klan business on there.”

Mr. Lanzo’s establishment has been in the news before, specifically when he posted this question on his now infamous sign: “Is Michael Jackson Not Guilty Because He Is A Nigger or Money” and his take on the Affordable Care Act: “Obama Plan For Healthcare? Nigger Rig It.”

In a phone interview, when Mr. Lanzo was asked about how his motivation for displaying such provocative signs, he responded: “I’ve been doing this for 26 years, it’s strictly free speech.  If others get offended, I don’t care.” He was told that school buses regularly pass by his establishment and asked how he felt about children seeing his sign.  Lanzo simply stated, “It’s not my responsibility to raise other people’s children.  What’s any different than brainwashing them as Baptists, Methodists, or Catholics?  The Baptists think the Methodists are the worst people in the world and the Methodists think the same about the Jehovah’s Witnesses, how’s my sign any different?”

Patrick Lanzo is indeed a talker.  He noted that, while he has had many events for “skinheads” and “the klan,” he was also a “card-carrying member of the NAACP.”  Lanzo was appalled that during a rally and protest against his signs, he says the NAACP wouldn’t let him speak in spite of his NAACP membership.  He continued, “at one time I was a member of the Rainbow Coalition and the NAACP and they denied me the right to speak at their protest against my sign.” Mr. Lanzo is not happy with the Rainbow Coalition and the NAACP, he says “I feel I could run with Al Qaeda and be less offended than dealing with the people of the NAACP, not that I would.”

According to Mr. Lanzo, he’s a free thinker and supports the rights of others, “do you know that one time I had a skinhead rally at my bar and brought in a black stripper?” He also states, “I invited the queer rights to march in the Dallas, Georgia Christmas Parade. Instead of letting them march, Dallas cancelled the parade.”

The conversation with Mr. Lanzo then turned to the word “ni**er” and why he chose such a hurtful word for a very public sign.  Lanzo responded, “I’ve done a tremendous business for twenty-six years and we do not expect everybody to be comfortable here.  I’ve had black people come in here to have their picture taken, everybody is welcome.  I’ve had white niggers I’ve thrown out faster than anybody.”

Ultimately, Mr. Lanzo has the right to offend as many people as he wants on his private property and he seems to feel that the offended have the right to speak out against his actions.  Is his sign a publicity stunt? Perhaps.  Will his sign draw more people to tiny unincorporated Draketown? Probably not.

After getting your fill of the Georgia Peach Oyster Bar, feel free to drive the additional few miles to Lake Olympia, in Unincorporated Corinth, GA.  The lake is beautiful and a palette-cleansing experience.

*Emokidsloveme traveled to Draketown, Georgia to personally photograph the sign in front of the Georgia Peach Oyster Bar.