I have always liked monster movies, ever since I was a small child.

My early imagination was often seized by their presentations of potential predicaments; in the films I'm thinking of, made in the '50s, when everything was tranquil, indeed tranquil-ized-- beneath that veneer seethed fears of Apocalypse and doom.

And why not? There was the Bomb, and those Russians.

Now, the Earth was often menaced, in a number of these pictures, by a cosmic crisis.

In The War of the Worlds, for example, hostile, invading Martians nearly wiped everybody out.

This was lately re-made (these days everything gets re-made) by Spielberg, but many seemed to feel this re-make, however technically accomplished and computer-generated, somehow lacked the urgency you can feel in the earlier version.

The Japanese movie Gorath posited an unusual scenario. When the Earth is threatened by collision with another celestial body, a rogue star from outside our Solar System. scientists get together and manage to move the Earth itself out of the way!

You can't say that the 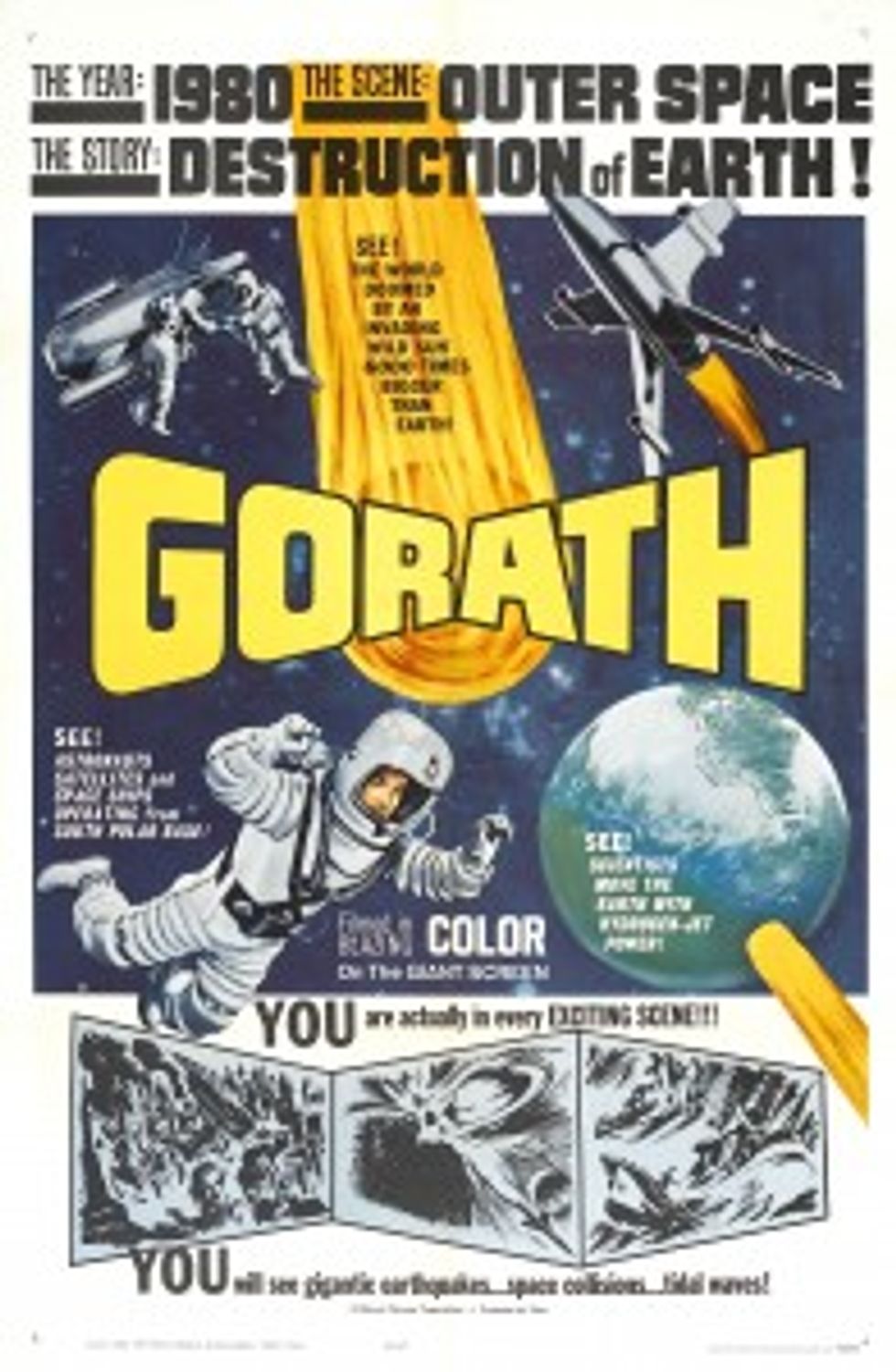 people who came up with this stuff weren't accustomed to thinking big.

But after the plot got going, and you had seen the monster or menace in action, pretty soon you would be shown scenes... of laboratories with mysterious, bubbling liquids running through tubes-- Science, rallying to engage in combat.

Or, you'd see an aerial shot, stock footage with the superimposed lettering, "The Pentagon-- Washington, D.C."

And you'd know that capable people were on the job, and start to hope that it might be possible to get the upper hand.

Perhaps you see where I'm going with this. In my adulthood, I now do find myself confronting... a planetary crisis.

The heating of the planet, the acidification of the oceans-- the viability of life is threatened.

Just a small rise in temperature has the potential to destroy most life. It happened before in Earth's history-- the Permian-Triassic extinction event, also called The Great Dying. Most life perished-- 96 % of all marine species, 70% of vertebrated life on land.

Even insects were almost all killed.

That shock has been described as the "mother of all mass extinctions." Don't think I'm talking about the death of the dinosaurs. This was millions of years earlier, before the dinosaurs-- and far more severe.

But-- can we be rest assured that "The Pentagon-- Washington, D.C." is even now scrambling to deal with it?

Did we ever, ever think that nobody would even try?