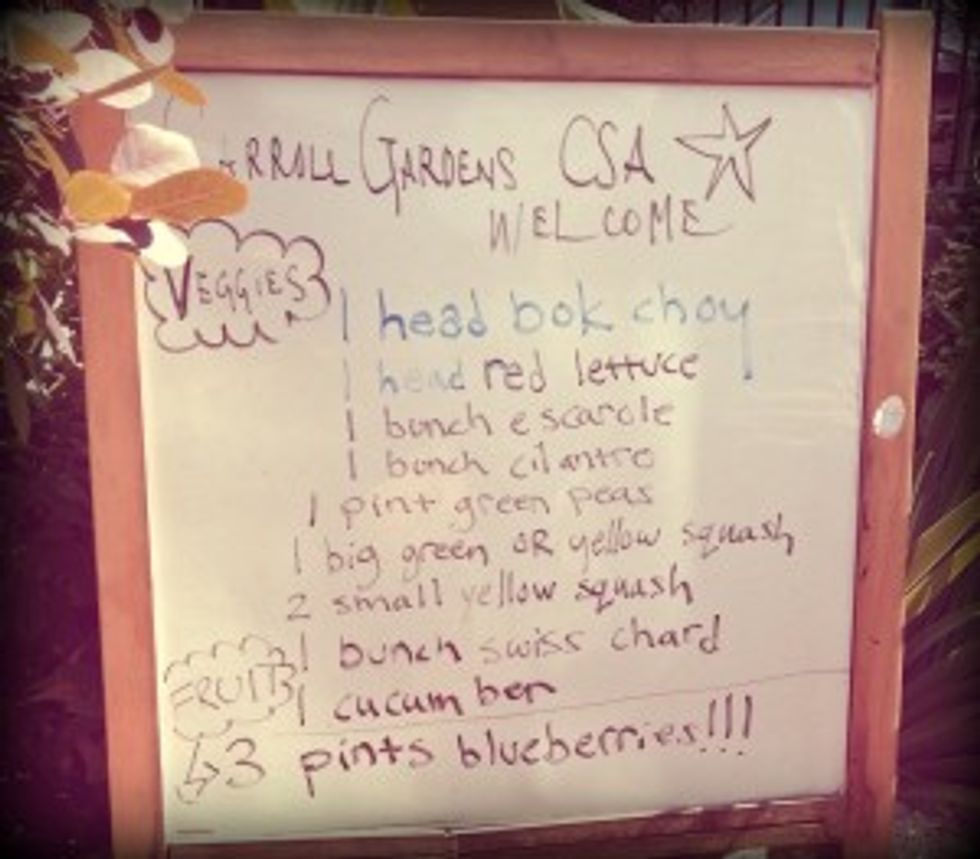 One of the great boons to my cooking life this year has been discovering the joy of Pinterest. If you're fond of online recipes, I highly recommend it. I just roam around, reading other people's feeds and food blogs, and if I see something I like, one press and pinned! And it's all on one page---of pictures!---for me to scroll through rapidly to decide what to do with the ingredients I have. It's almost insultingly easy. So recommended.

Used the chard and the cilantro, along with onion, spices, garlic and pinto beans I had cooked earlier to make a burrito filling. Cooked it in beer because I can. Served it with salsa and spinach tortillas, and a touch of yogurt, though that’s not necessary.

Used the lettuce and the cucumber to make a salad with some cherry tomatoes. I had a lot of lettuce leftover, so I stored it in one of those containers they make just for produce, to keep it crisp.

Since it was a weekend night that we were staying in, I took the scraps I collect from veggies and made veggie broth, as well as other 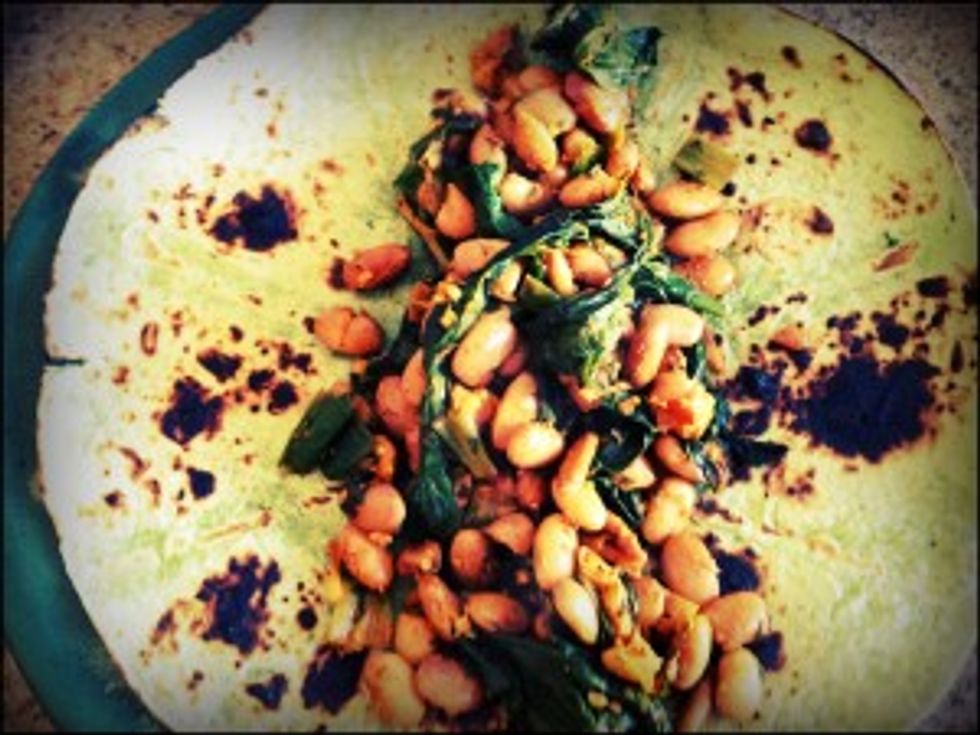 stuff I tend to make when I have an evening with nothing else to do but drink wine, read Pinterest and cook: veggie burgers, bread, that sort of thing.

I was glad I kept it light, because Marc had bought Uncle Louie G’s Italian ices, and it’s always good to have a little room for that.

Vegetarian, but could easily be vegan if you hold the yogurt.

I had a turnip leftover from last week, so I chopped it up and made a mini-gratin with it using thyme, Swiss cheese, and milk based on this recipe.

I took one of the three pints of blueberries I had and used it to make blueberry muffins. They baked on the same temperature as the gratin, so that worked out pretty well.

And last but not least, I took the escarole and a couple of cans of white beans I happened to have on hand---I’d bought it on sale a couple of weeks ago---and made escarole and white beans.  I tossed in some lemon zest as well, because why not. I added basil in at the end, because my basil plant is really growing well and I can basically use as much as I want. 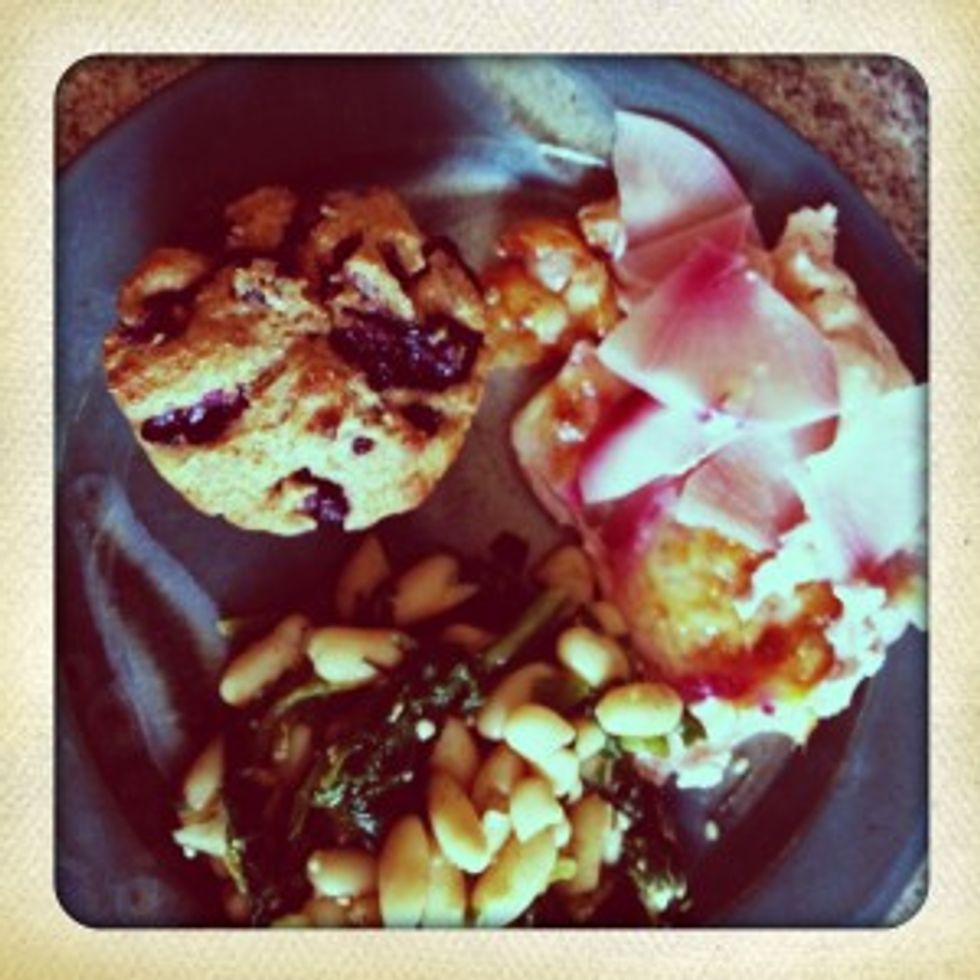 I had more bok choy and sugar snap peas, and there’s just not a whole lot you can do with that outside of stir fry. I did mix it up this time by using my second block of tempeh and trying a more Thai-influenced basil sauce like this one here. Served over rice. If you guys have ideas of how to use bok choy and snap peas outside of stir fry, I’d be more grateful. I don’t mind eating this much stir fry, but I’d like more variety.

Served blueberries over pudding as dessert.

Vegetarian, since I didn’t use fish sauce.

We had a get-together with friends before going to see “Brave”, and I made these zucchini chips for it, but using buttermilk and with an egg whipped into it. I also made a dipping sauce with yogurt, lemon juice, salt, pepper, and fresh oregano.