Shorter Rand Paul: White People Get to Keep What They Steal 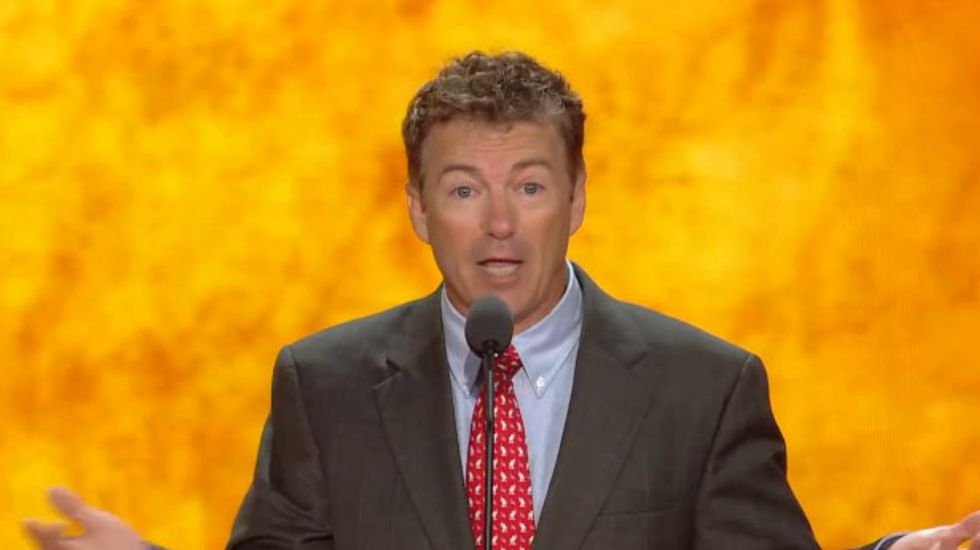 So, there's been an ongoing court battle of a handful of gold coins that the federal government required people to turn in back in 1933, which was a necessary move to keep people from hoarding gold and clinging to what might be my second favorite wingnut delusion*: that the gold standard is meaningful in any way. Well, some of the coins were stolen, and they finally turned up in the hands of Joan Langford, whose father the federal government says was involved in stealing the coins.

"Those coins were all in a vault and were supposed to be melted. They were never issued," says Jacqueline Romero, assistant U.S. attorney in Philadelphia.

She says that the 10 Double Eagles were stolen property, taken from the U.S. Mint in Philadelphia in the 1930s in an inside job, probably by a crooked cashier.

"They didn't go out through the front door," says Romero. "This was clearly a crime. The people of the United States were robbed." The U.S. Secret Service probed the case in the 1940s, she says, and every coin they found in circulation traces back to Switt.

At this point, each stolen coin is supposedly valued at $7 million. Naturally, Langford wants to keep them, and has protested the government's attempts to confiscate them by claiming they can't prove they're stolen. She was ruled against this week by a court that said that whether or not they were stolen, they belong to the government and need to be turned in. This is all very silly. Langford should be grateful the government isn't using this to mount some bigger case against her, and only wants their coins back. A creative and vindictive prosecutor could come up with a whole bunch of fun criminal and civil charges, I'm sure.

Anyway, Rand Paul was asked about it on Sean Hannity's show, and he decided that forcing rich white people to return stolen property is like Nazis stealing from Jews they intend to incinerate:

HANNITY: Did you hear about the case today? It was a couple and they found these gold double eagle coins from 1939, I think, is the year. And they’re worth like $80 million. Now a court case it was in, because they had, I guess, confiscated them or asked people to turn them in . . . but [the government] had the ten coins or whatever it was. And they said “no, we’re taking them, and you don’t get a penny.”

PAUL: It’s sort of like the Nazis taking paintings from Jewish families during the war and saying you don’t get them back. Well they’re yours, they’re still yours even if you find it 60 years later.

Now, I suppose it's possible he meant that the family are like  the Nazis, and the government are the Jewish families whose claim isn't relinquished. But since he continues to blather on about how the law needs to be "reversed", I highly doubt it. Of course, the law doesn't need to be "reversed", since it basically should have drifted into irrelevance once all the coins in question were confiscated. It's a good thing the law is still on the books, because it allows the government to confiscate stolen good decades after they were stolen.

But the hypocrisy on display on the right is breathtaking. They claim that we need widespread voter ID laws that purge millions of legal voters nationwide in order to stop the mythical problem of voter fraud. They use the haunting fear that someone, somewhere might get $100 they aren't legally entitled to as an excuse to attack the very existence of welfare. But a white woman exploiting gold bugs to scam the government out of millions of dollars? Meh, let her have the money, especially since her property can be used to stoke weird fantasies about the gold standard. Are you fucking kidding me?

Needless to say, when Romney runs around trying to turn out the right wing base with the same old "take our country back" insinuations, this is the sort of thing he's catering to, the notion that the federal government exists to preserve the privileges of the white and the wealthy. Most of the form that takes is of oppressing working people and people of color, but a lot of it is giving special consideration to white, wealthy people.

*The first being that fluoridation in the water was a pilot program for mass sterilization of white people, for purposes unknown.