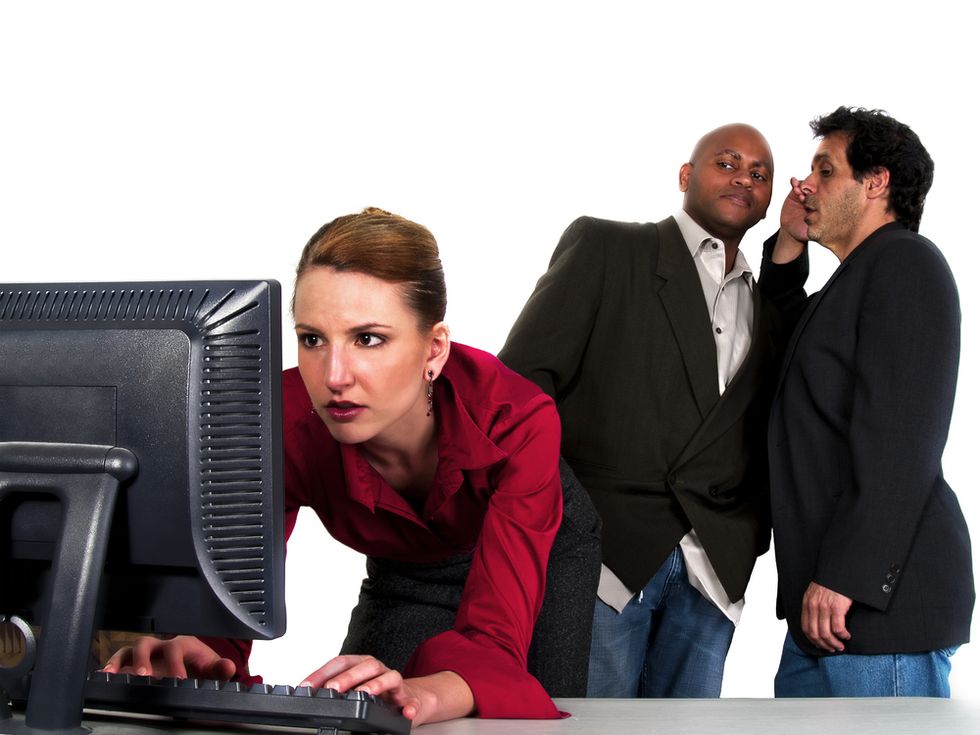 One of the biggest misconceptions out there about sexual harassment is that it's mostly intended as a kind of flirting, an attempt by the harasser  to get positive attention and maybe even consensual sex. If you believe that, you're much more likely to be hoodwinked by pro-harassment arguments about how innocent men are getting castigated, thrown out of conferences and bars, blocked on Twitter, etc. because they are either socially inept (Asperger's is often trotted out as an excuse) or because "hypersensitive" bitches are freaking out because they love to "play the victim". (Enjoy my take on this misogynist stereotype at the Daily Beast.) The reality is that harassment is usually about, well, harassing someone. It's often disguised as flirting, but only so the harasser can (oh irony) play the part of the victimized innocent when his target pushes back. Disguising it as flirting also helps draw out the harassment, because the target often doesn't want to be painted as "hypersensitive" and so she can be coerced with that into playing along and pretending she's being flirted with when she and the harasser both know that he's pushing her boundaries to get the pleasure of making her uncomfortable. Sometimes harassment is its own reward for harassers. Sometimes the harasser feels that he wouldn't be able to have consensual flirting, much less sex, with the target anyway, so he's pre-emptively punishing her for this hypothetical rejection. Sometimes, sadly, the harasser is a rapist and he's trying to see if he can bully the victim with his "flirting" into being alone with him so he can rape her. But the point of harassment is not to get consensual interactions with women, and that myth needs to die already.

Thomas at Yes Means Yes carefully analyzes this story that's gone viral of a woman who dealt with a harasser on a dating website by sending screenshots of his harassment to his mother. He makes a very important point about unsolicited cock shots. There's a myth out there that men who send unsolicited cock shots are just inept flirters who are making a sincere effort to get laid. But that's implausible, because that would require a level of stupidity so profound that these men would be unable to hold down jobs or have friends, and there's just too many unsolicited cock shots going around for that. But as Thomas points out, this man's reaction to her immediate and blunt rejection of his harassment indicates that his intention was to make the target uncomfortable.

Note what he does after she tells him it’s unwanted.  If the purpose were to show off his physical assets in the hope that she’d be interested, one would expect his reply to her reaction to be some sort of apology.  But that’s not how he reacts.  Instead, he tries four times to talk her out of her stated boundaries.  He asks if it’s too big.  He tells her to “relax.”  Then he calls her “prude.”  These are sort of the classic tropes used to attack women for expressing boundaries or calling out sexism: Frigid, uptight, humorless, prudish.

Now, at this point, he can’t possibly believe she’s typing one-handed.  He is conscious of the rejection.  Instead of going away, he tried to bully her out of it, and see if he could still pressure her into playing along.  In fact, that’s what he kept trying to do, until she followed his profile to his Facebook profile, then to his mother’s profile, and threatened to expose his conduct to his mother.  She was being very clear that she wanted him to go away and have no further contact with her, and he kept messenging her until she had an effective threat in hand.

This interaction doesn't demonstrate that the man sending the unsolicited cock shot is profoundly stupid or socially inept, but the opposite: He's extremely well-versed in the unspoken "rules" of social interaction. He's particularly aware of the profound pressure that women are under to play along and pretend that harassment is "flirting" for fear of being accused of hypersensitivity. Indeed, he demonstrates this awareness by promptly reminding her of her "obligation" to play along to "prove" she's not hypersensitive. He also knows that women are supposed to be ashamed of being harassed and to try not to draw attention to it, and when she rejects that "rule" by sharing his tests with his mother, he is genuinely freaked out because she's not playing by the script that his probably countless other targets have. He doesn't ask her to stop for his mother's sake. He says, "That's not right." He knows that the unspoken rules state that women are to turn inward with shame when sexually harassed, and when someone said to hell with those rules, he---a guy who sends unsolicited cock shots!---becomes All About The Rules.

What's interesting to me is that sexual harassers subconsciously (or hell, consciously, I don't know) understand themselves as a grassroots political movement to put bitches in their place. I know this, because they show the kind of unity and determination for their ideological goals that liberal organizers wish we could get for ours. Tracy Clark-Flory wrote about this story at Salon, and she notes the reaction the woman who fought back got:

She has, however, received responses of a different sort. Yes, there are lots of women pumping their fists in the air and cheering her on, but her blog has also reportedly been inundated with messages like the following, “If you had/get some good dick (which you obviously haven’t/don’t) you wouldn’t be such a grammar nazi and prude.” He really showed her! Once again, Internet jerks respond to a woman calling out jerks by being even bigger jerks.

That's because they are a political movement, and when one of their own---a sexual harasser---gets shut down, they rush forward to his defense. A political movement can be defined as a group of people, organized formallly or not, who have a belief, some goals to establish that belief in the world, and a set of tactics they use to achieve those goals. For instance, feminists believe in women's equality and the dismantling of gender roles. They want to establish that belief by fighting for reproductive rights, an end to sexual and domestic violence, and a more equitable share of the workload in both the public and private sphere. They use tactics like lobbying, lawsuits, awareness campaigns, and running for office.

If I were to chart out what pro-harassment as a political movement looks like, therefore, it's this:

Thus, like clockwork, every time a woman or even a man speaks up against sexual harassment, the bat signal goes up and they get absolutely flooded with harassment. What makes it so frightening as a political tactic is that for the pro-harassment forces, harassment is fun and an end in and of itself. So they have endless bounds of energy for it, which is why they're so damn confident that they can harass women into silence. Clearly, the only thing that can be done is for anti-harassment people to hang in there and  remind themselves that while our opponents may have tons of energy, we have the numbers. The positive response this woman got is heartening. If we keep it up, we can get a handle on this thing.
Please contact support@rawstory.com for customer support or to update your subscription. Report typos and corrections to: corrections@rawstory.com.