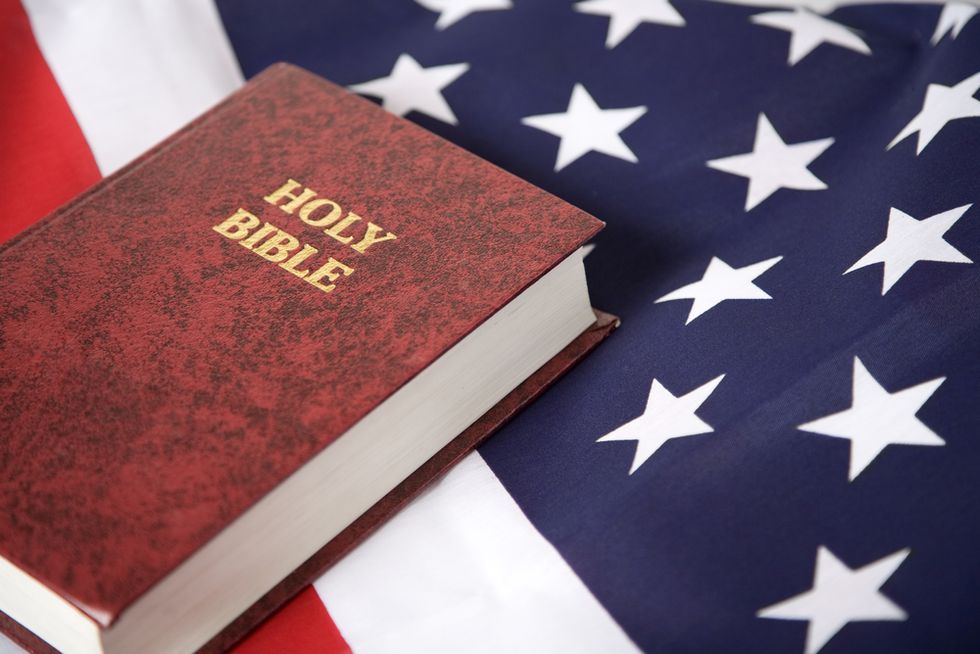 Sometimes the word salad of commentators at Fox News amuses me as much as their right wing views freak me out. It's not uncommon to have commentators just toss a bunch of catch phrases and words that have resonance with right wing (often fundamentalist) audiences that don't make sense without that context. Part of it is establishing plausible deniability---it's hard for critics to really argue with you when they don't know what you're saying---and part of it is that conservatism is really more about button-pressing than making arguments anyway. So why not just run out there, press as many buttons as you can in five minutes, and dash off, knowing that they'll be whipped into a rage, even if they can't explain exactly why. Liz Trotta's bit of dadaist wingnuttery on Fox News recently is a killer example:

Total gibberish if you speak standard English, but not if you learn how to translate some of the key catchphrases of right wingnuttery English. Crooks and Liars kindly transcribes, and I'm hear to translate.

But this isn't the only part of Obamacare the social engineers are facing. The U.S. Catholic bishops and leaders of other faiths told the administration that the latest rewrite of the so-called contraception mandate is not acceptable. What the Obama people don't get is that forcing people to buy into a plan that subsidizes contraceptives, abortion inducing drugs and sterilization is a brazen violation of the separation between church and state.

"Subsidizes" means "allowing people to pay directly, as employees do with their labor and money, instead of giving their employers control over how people's private lives are conducted". "Separation of church and state" is a term that most of us understand to mean that the state should not endorse religious beliefs, perhaps by not giving special powers to religions that are not extended to the rest of us. In Wingnutese, however, "separation of church and state" means that the state has a special obligation to prefer conservative forms of Christianity to all other religions. I know, confusing. It's meant to be.

It is above all a matter of conscience, a moral standard foreign to Obama's secular creed.

"Conscience" means giving your boss a say in your medical care, family size, and sex life. Indeed, this is a violation of the secular creed. Notice that standard English assumes "separation of church and state" and "secularism" are the same thing. But because Wingnutese uses the first to basically mean the opposite of what common sense would dictate, the two values are at odds in the wingnut mind.

This is an administration that routinely runs roughshod over the sanctity of human life, a core value of Christians, Orthodox Jews and many others, appalled at the President's mean audacity. It's called religious liberty and it is the bedrock of this country's founding principles.

"Sanctity of human life" means "disapproval of other people's sex lives". "Religious liberty" means "using state power to enforce the privileged status of conservative faiths". In this particular case, that means the state should sign off on religious conservative employers discriminating against their employees who have different views of sexuality and reproduction, by withholding earned benefits as punishment.

The Obama administration has made several bad faith attempts to fiddle with the contraception mandate's punitive character by juggling the bookkeeping methods, but the stern consequence remains.

Basically, the religious right has their eyes on the prize: Employers want the right to dock your pay if they disapprove of your sex life, and any attempt to keep women's paychecks and benefits unaffected by their employer's misogyny will be protested.

Driving Obamacare is an eagerness to placate perpetually outraged feminists and press home fidelity to secularism at the expense of religious freedom. Their zeal to stamp out insurance to faith and conscience is extraordinary really. It's difficult to imagine any past president taking such license in this matter of faith and morals.

Secularists and feminists are terrible people because they oppose employment discrimination. In the halcyon days of yore, government was utterly willing to let people's desire for a paycheck be used to force them to submit to the religious whims of the wealthy. They were also allowed to discriminate based on race and gender, which is also sorely missed by conservatives.

Some would add that such disregard is deeply rooted in the extraordinary creeping paganism that makes a mockery of the so-called separation between church and state, not to mention the President's very oath of office.

"Creeping paganism" makes the standard English speaker wonder if she's talking about Wicca. But no, she's really not. "Creeping paganism", in Wingnutese, means the explosions in number of non-religious, non-Christian, and even Christian citizens who do not believe that the government has a right to impose the views of misogynist, right wing Christians on everyone else---and also do not believe that your employers have that right, either. So, roughly, translated, she's saying, "Some would add that such disregard is deeply rooted in the expansion of support for religious freedom that undermines our attempts to impose a specific view of Christianity through both government and corporate power, a mission we believe any rightful President should support." Translated, she is correct in guessing what's going on, though her views on this are completely wrong.

So, with this handy guide, you can actually get a pretty good idea of what Liz Trotta's argument is:

See, it's a pretty clear-cut argument, though you can see why, because it's so terrible and unconstitutional and all that jazz, that Trotta fears making it directly.