Al Gore: 'Our democracy has been hacked,' and survival of civilization at risk 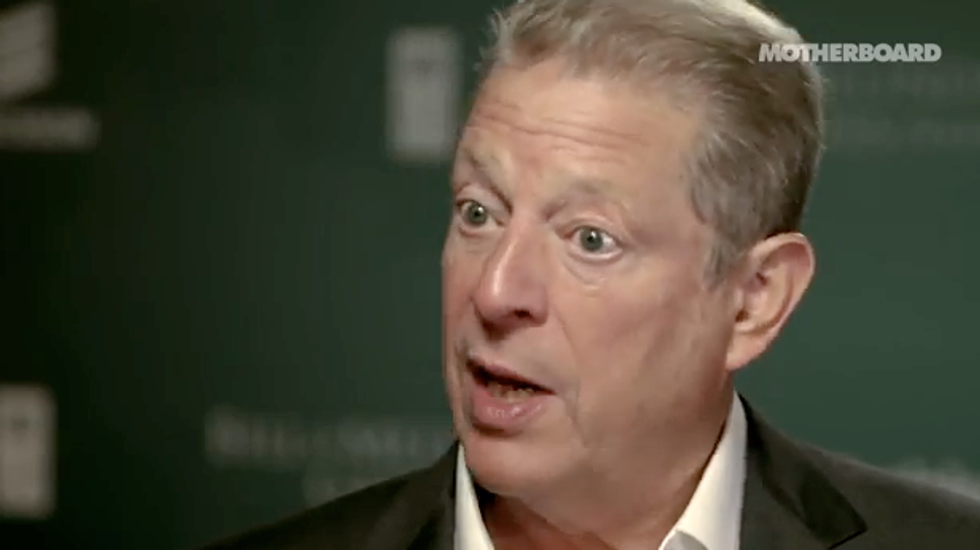 Former Vice President Al Gore says democracy has been overtaken by corporate special interests, and it’s up to web-based activists to take it back.

“We as U.S. citizens need to pay careful attention to the fact that our democracy has been hacked,” Gore told Motherboard. “Big money has perverted our democracy, hacked it, taken it over and twisted it to serve the purposes of special interests.”

Gore, who lost the 2000 presidential election to George W. Bush as the result of a 5-4 Supreme Court ruling, said Americans must recognize that new reality and then accept the challenge of fixing it.

“We need an ‘Occupy Democracy,’ if you will,” Gore said.

The environmental activist said lobbyists and corporate special interests controlled the debate over climate change, and they guarded their position through television and other mass media.

“Access to television is controlled by gatekeepers who charge lots of money,” Gore told Motherboard.

He echoed those comments in a speech Friday at the Brookings Institute, saying American media have been intimidated by corporate special interests and conservative activists in the debate over climate change.

“They are vulnerable to distorted news judgments because the line separating news and entertainment has long since been crossed, and ratings have a big influence on the selection of stories that are put in the news,” Gore said at the think tank.

“The deniers of the climate crisis, quite a few of them paid by the large fossil fuel polluters -- really it is like a family with an alcoholic father who flies into a rage if anyone mentions alcohol, and so the rest of the family decides to keep the peace by never mentioning the elephant in the room, and many in the news media are exactly in that position,” the former vice president said.

Gore said the stakes couldn’t be higher, with the survival of civilization as we know it at risk if no action was taken on climate change.

“We have seen global warming thus far of just a little bit less than one degree Celsius and look at what has happened: Superstorm Sandy, Boulder, Colorado, all these fires, Hurricane Irene one year before Sandy -- how many billions was that? -- this huge drought, dust storms starting up in bigger volumes again, the Pakistan flood that displaced 20 million people, the Russian drought and fires that led to the highest spike in food prices ever recorded -- that has an impact on poor people around the world,” Gore told Motherboard.

“You look at all of the impacts that have occurred with less than one degree increase in temperature and then you project what they say could be a five to six degree increase possibly by the end of this century, it's unimaginable,” he said. “We cannot allow that to happen.”