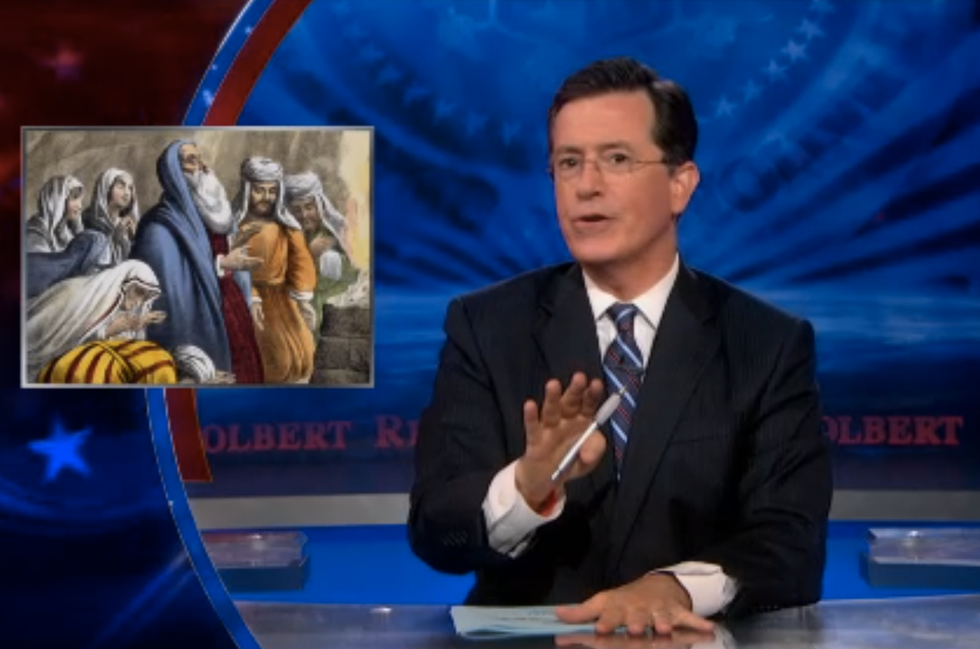 Wednesday night on "The Colbert Report," host Stephen Colbert sent up the dire, apocalyptic warnings about the invasion of Syria promulgated by Fox News' Neil Cavuto and a guest, Armageddon "expert" Joel Rosenberg.

Colbert began by noting that just about everyone has weighed in on the question of whether to attack Syria from multiple angles, including himself.

The Vancouver Sun published a piece entitled "Destruction of Syria welcomed by apocalyptic Christians," in which writer Douglas Todd explored evangelicals' belief that the destruction of the ancient Syrian capital Damascus fulfills one of the Biblical end times prophecies and will hasten the second coming of Jesus Christ.

"And the signs of the apocalypse are everywhere," Colbert said. "After all, I just quoted from a Canadian newspaper."

He continued, "And folks, I am not the only one reporting prophecy as news. So is Fox News anchor and eleventh plague, Neil Cavuto."

He pointed to Cavuto's recent segment on Syria and the apocalypse in which the Fox anchor asked viewers to consider that these could be the last days.

"Everything in the Bible says is coming to pass," Colbert said. "Thankfully, I already have two of every animal in my meat ark."

Cavuto welcomed "Armageddon enthusiast" Joel Rosenberg to his show, who said that no one can say for certain whether the Syrian prophecies from the Bible will come true, but because they haven't happened, they still could occur.

"True," Colbert agreed. "Everything that hasn't happened yet could happen. I mean, the seas turning red with blood, lions laying down with lambs, the 'Friends' movie, all possible!"

Rosenberg told Cavuto that events are unfolding rather like they did in his novel, Damascus Countdown.

"Yes, he imagines a scenario," Colbert said, "which qualifies him to be interviewed by an imaginary newsman."