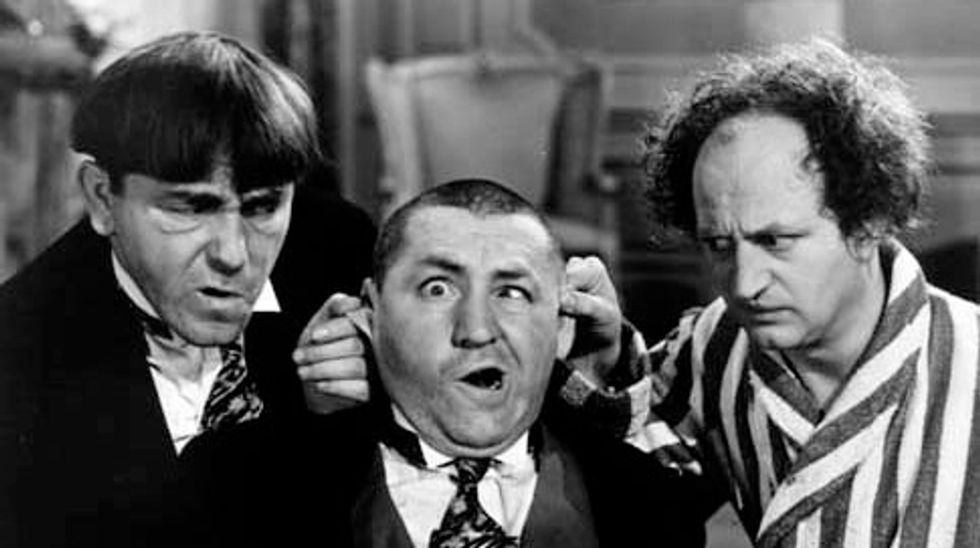 A Three Stooges short previously thought lost in a 1967 fire has just received its first screening since being rediscovered in a garden shed in Australia.

Hello, Pop!, a 17-minute short made for MGM in 1933 featuring the Stooges alongside their creator, Ted Healy, was the only Three Stooges film thought not to have survived, after MGM's negative was destroyed in a vault fire in 1967 that also consumed the only known copy of Tod Browning's silent shocker London After Midnight. However, 78-year-old film collector Malcolm Smith came across a 35mm nitrate negative of the film in his shed in a Sydney suburb while sorting through his collection for disposal. Smith then contacted the Vitaphone Project, an archive and preservation organisation in the US, in December last year, and they took on the job of restoring it.

The Three Stooges were originally created by Healy as part of his vaudeville act, with Moe Howard hired as his first "stooge" – ie, fake audience member invited up on stage – in 1922. Shemp Howard, Moe's brother, was added in 1923, and Larry Fine became the third stooge in 1925. The quartet had immediate success on Broadway, and made the feature-length comedy Soup to Nuts in 1930. Shemp left in 1932, and was replaced by his brother Curly; and despite long-running contract disputes between Healy and the Stooges, they signed up together for a series of five MGM shorts. Hello, Pop! features Healy as a musicals producer attempting to stage an elaborate show, but whose efforts are constantly interrupted by visitors, the Stooges among them.