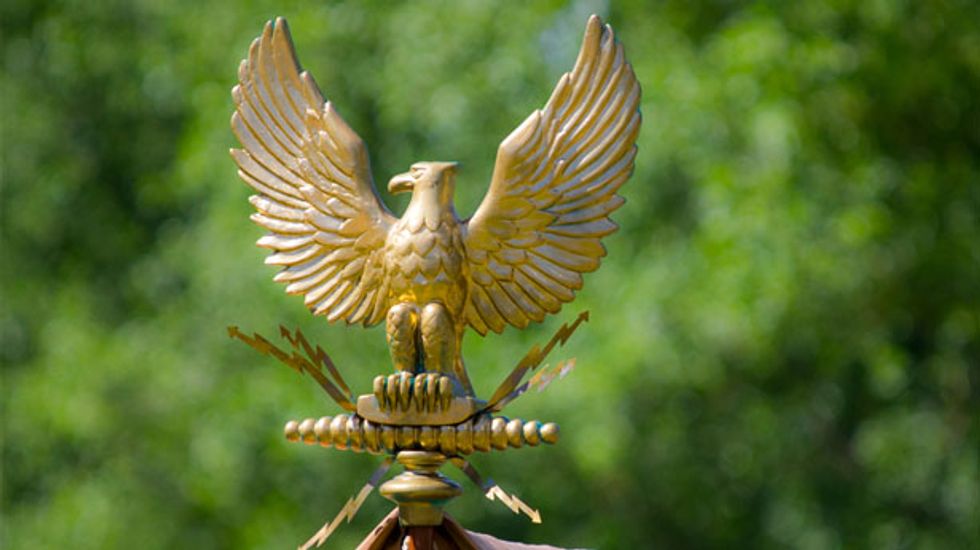 A superb Roman eagle in near pristine condition, serpent prey still wriggling in its beak, has been found by archaeologists in the City of London. A symbol of immortality and power, it was carefully preserved when the aristocratic tomb it decorated was smashed up more than 1,800 years ago – and is regarded as one of the best pieces of Romano-British art ever found.

The preservation is so startling that the archaeologists who found it a few weeks ago at the bottom of a ditch, on the last day of an excavation on a development site at the Minories, were worried in case they had unearthed a Victorian garden ornament.

Excitement spread as it became clear from the context that it really was Roman – but carved in Britain, from Cotswold limestone. Archaeologists are itching to research it further but first after a quick clean – and a frame to support the only damage, a broken wing – it is going on display for six months at the Museum of London, just 30 days from ditch to gallery.

Martin Henig, an internationally renowned expert on Roman art, said: "The sculpture is of exceptional quality, the finest sculpture by a Romano-British artist ever found in London, and amongst the very best statues surviving from Roman Britain. Its condition is extraordinary, as crisp as on the day it was carved. All it has lost is the surface paint, probably washed away when it was deposited in a ditch."

The only comparable find in Britain is the sad stump of a bird, lacking head, wings and feet, found at a Roman villa site at Keynsham in Somerset in the 1920s. The closest from across the Roman empire was an eagle and serpent found in Jordan, now in the Cincinnati Art Museum.

Eagles are found across the empire, usually as symbols of imperial clout, but they were also used as funerary emblems: there are extraordinary contemporary accounts of live eagles trapped within the funeral pyres of emperors, freed to soar towards the sky as the flames crackled, symbolising the moment when the dead man became a god.

The London eagle was carved in the first century AD, at a time when the Roman city was exploding in population and wealth. It is believed to have stood on an imposing mausoleum, on the roadside edge of the eastern cemetery just outside the city walls. The road was once lined with the monuments of the wealthiest citizens, like the Via Appia outside Rome.

Possibly only a few decades later, many of the monuments were demolished – probably as ownership of the plots changed and new ones were built. There is even evidence suggesting that some of the old bones were left scattered in the open air.

Most of the stone was reused as hardcore or building stone, but the eagle was carefully laid into a ditch, probably just beside its former perch. Michael Marshall, finds expert at Museum of London Archaeology, believes that a superstitious awe probably protected such a powerful religious symbol, even when the tomb of its original owner became builders' rubble.

There it lay for almost 2,000 years, surviving in almost pristine condition while Tudor cellars, Victorian warehouses and 20th century concrete piling punched through the earth all around it, until the Monday morning last month – the last day of the excavation before a 16-storey hotel is built on the site. When Antoinetta Lerz and David Sankey lifted the mud-caked lump of stone from the ground, they set it on the edge of their pit, and first began to clean off the clay with a trowel – and then as they saw the delicacy of the carving, with a dentist's pick. When they had revealed a wing and the sharp beaked head was emerging, they phoned site supervisor Simon Davis to suggest nervously that they thought they had found something extraordinary. "We were a bit nervous at first about proclaiming it as Roman, because the condition was so extraordinary," Davis said.

The bird's front is intricately carved, but the back is flattened and plain – like a Staffordshire china mantelpiece dog – suggesting that it was originally sheltered by a niche, or stood within a tomb building. Scattered animal bones and pottery nearby suggest funeral feasts or that family members revisited the tomb to dine with the spirits of their dead.

Serpents could be either benevolent symbols or harbingers of evil: some eagle and serpent carvings show the two beasts quite companionably entwined. There is nothing benevolent about the London serpent, carved wreathed around the bird, its tongue still flickering on the feathery chest, but the great beak is about to snap shut: "It's all over for the snake – it just doesn't know it yet," Michael Marshall said.

The eagle's triumph is greater because the snake is equipped with an alarming row of sharp teeth.

"This may suggest that the artist had never got up close and personal with a snake," Marshall said. "We did have a go at identifying the species of snake when we had some zoologists in – but they just said 'it's a snake'."