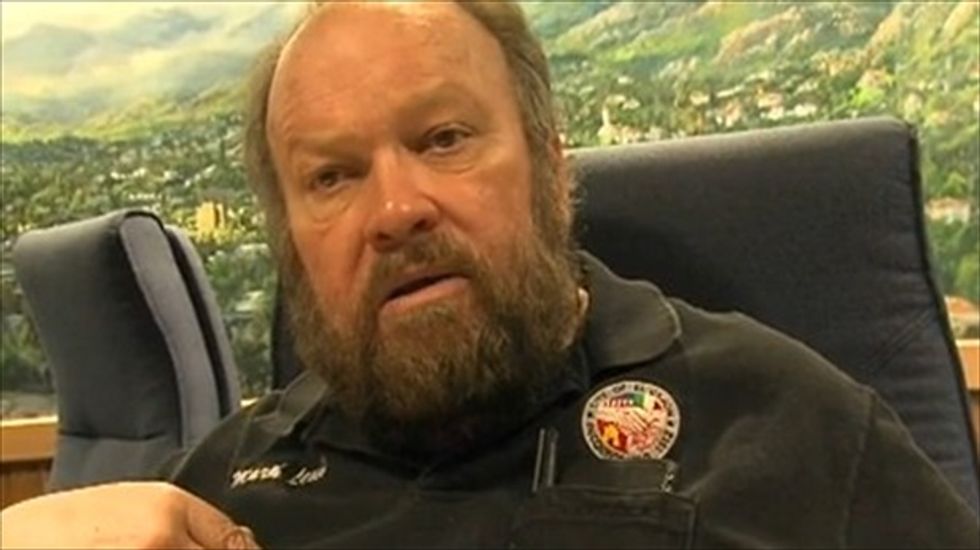 While a California mayor and his city defend themselves against accusations of racism after his remarks criticizing Chaldean Catholic immigrants from Iraq were published in a national magazine, audio obtained exclusively by The Raw Story reveals him also disparaging his town's Mexican-American community and "Black Africans" in an interview replete with stereotype-driven opinions.

During an interview with Arun Gupta for The Progressive magazine published in May 2013, El Cajon Mayor Mark Lewis can be heard saying the city has had "a terrible time" dealing with some Chaldean business owners because they will allegedly not serve women.

"You don't know how many times I've told them, if you're open for business, you have to serve female customers as well," Lewis told the Progressive, after explaining that, "In our society the female is the same as the male. They haven't got that through their heads yet."

Mayor Pro Tem Bill Wells criticized Wells' remarks in a phone interview with KPBS-TV aired Tuesday, saying that the city does not support institutionalized racism, citing the presence of two Chaldeans, including one woman, on the city's planning committee, while also criticizing Lewis.

"It's an insensitive remark," Wells told KPBS. "If he said something like that, he should apologize."

But Gupta told Raw Story via email that he felt Wells and city officials were playing damage control in the wake of Lewis' remarks.

"The city wants to sweep the plight of Iraqi refugees under the rug," Gupta said in his email. "How can you have thousands of people from the same community living in squalor, with few job prospects, with high rates of depression and trauma being unaddressed, and say race is not a factor? If race was not a factor then we should expect to hear as much concern in El Cajon about the situation of Iraqi refugees who have fled a war that destroyed their country, as we do about the U.S. soldiers who took part in that war."

Lewis also alleged in the interview, which was recorded in March 2013, that schools in the area had problems disciplining Chaldean students because of their culture's alleged misogyny.

"The mother can talk all they want, and they'll pay no attention to her," he can be heard saying on tape. "[In] their culture, it's not until the male talks to you that anything gets done. Because they don't recognize that females are worth anything, and your mother's just there to take care of your father."

Attempts to reach the California chapter of the Chaldean Federation of America before publication were not successful.

Some of Lewis' remarks, including his statement that some Chaldean students benefiting from free lunch programs at school are "being picked up by Mercedes Benzes," were published as part of a report on the influx of Chaldean immigrants into El Cajon, which dates back to the 1950s.

According to the Progressive, nearly a third of the city's population of around 100,000 people is of Iraqi descent. But many of the city's new residents told the magazine they were having trouble finding a job, which corroborates the Centers for Disease Control and Prevention finding that 67 percent of Iraqis who came to the U.S. after 2009 are unemployed.

In one remark that was not published in the article, Lewis blames inter-faith conflicts for the mass emigration of Chaldeans to the U.S.

"Right now, the Moslems [sic] are causing hardship with the Christian community in Iraq," Lewis says. "So they're bailing out of there as soon as they can."

KGTV-TV reported on Tuesday that residents from various communities publicly criticized the mayor's remarks during a meeting of the local city council.

"The citizens of El Cajon deserve better than someone to oppress them and say, 'Hey, you guys don't matter,'" one Chaldean resident, Mark Arabo, was quoted as saying.

Lewis did not deny making those statements in a separate interview with KGTV after the meeting, saying, "I made those comments but not in that order," arguing that they stemmed from complaints from other residents looking to qualify for the free lunch program.

"First time, they come over here, it doesn't take them too long to learn where all the freebies are at," Lewis says in the interview.

Meanwhile, Lewis can also be heard on the tape saying, "There's lots of prostitutes in regards to the Middle Eastern community" and telling Gupta that the increasing number of Chaldeans had touched off drug-related tension among three different minority communities.

"The Mexican community feels intimidated, in regards to Chaldeans trying to get into their turf, in regards to selling drugs," Lewis says. "Same as the Black Africans, Black Americans."

Arun Gupta's entire interview with Mark Lewis can be heard below.

KGTV's story about the protest against Lewis' remarks, aired on Tuesday, can be seen below.

Raw Exclusives Video
Report typos and corrections to: corrections@rawstory.com.
Like this article ? Text `Support` to 50123 to donate.
READ COMMENTS - JOIN THE DISCUSSION

By Lawrence Hurley and Andrew Chung

WASHINGTON (Reuters) - The U.S. Supreme Court on Wednesday heard arguments in a case that could upend the landmark 1973 Roe v. Wade ruling legalizing procedure nationwide, with liberal justices warning against ditching important legal precedents while some conservatives signaled support for the restrictive Mississippi law at issue.

Trump might self-publish his memoir because he's afraid he'd get a smaller cash advance than Obama: publishing exec

On Tuesday, Politico reported that a publishing executive believes former President Donald Trump will self-publish his memoir rather than go through one of the big publishing houses.

The reason? He is afraid he would get a smaller cash advance than former President Barack Obama did for his memoir.