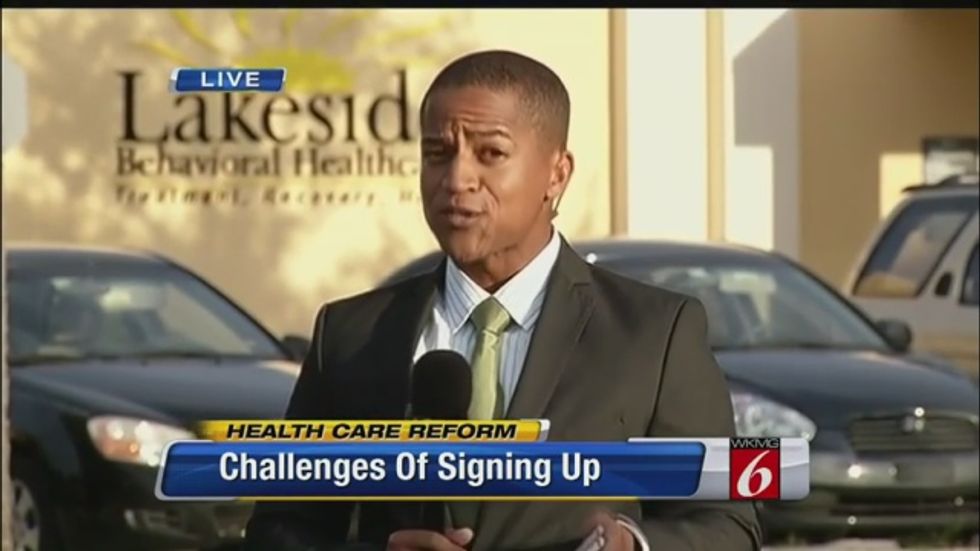 A Florida television station informed its viewers this week that they could be paying higher health insurance premiums if they have a bad credit score under the new health care reform law, but HealthCare.gov representatives have told Raw Story the claim is just not true.

A contributor to the DailyKos online community on Tuesday flagged a WKMG report highlighting problems with the roll-out of President Barack Obama's signature Affordable Care Act.

At the end of his story about the HealthCare.gov website being overloaded during the first week, reporter Louis Bolden warned his audience that there were other reasons to be concerned about the law.

"I understand that one of the concerns is actually about credit scores, people are being asked to show their credit score when signing up," the anchor pointed out.

"That's right, Lisa, it is asking you to show your credit score -- it is required," Bolden said. "And we were told if you have a low credit score, it could effect what you pay for premiums."

In a follow up report, the reporter provided more details: "It's like buying a house or a car. Your credit score and other factors can determine your interest rate. In this case, it can determine how much you pay in premiums."

The broadcast prompted conservative sites like The Weekly Standard and others to warn that credit scores would have "big impact" on insurance premiums.

But a representative from HealthCare.gov told Raw Story that the credit check during the application process was only used to verify identities and had no bearing on insurance premiums.

"Basically the eligibility requirements for keeping your monthly premiums low is based on your income," the representative explained.

A DailyKos commenter who claimed to have been trained as an Affordable Care Act "Navigator" also said that there was no evidence to support the station's claims.

"I have spent the last week training to be a navigator here in Illinois," the commenter wrote. "NO WHERE in all of those 7 days of training was a credit score mentioned in any way shape or form. The whole point is to get uninsured people onto a health care plan of some kind. If people have bad credit or no job at all, our job is to find them an avenue to health care."

In fact, one of the goals of the Affordable Care Act is to provide Americans with coverage so that they are not saddled with crippling debt when facing catastrophic medical problems.

"After receiving numerous emails about the story, Local 6 contacted Packham on Wednesday, and she said her statement was incorrect, adding that users do not need their credit scores to apply for the Affordable Care Act," the station wrote. "Local 6 is investigating how the person in charge of providing information about the Affordable Care Act could make such an error."