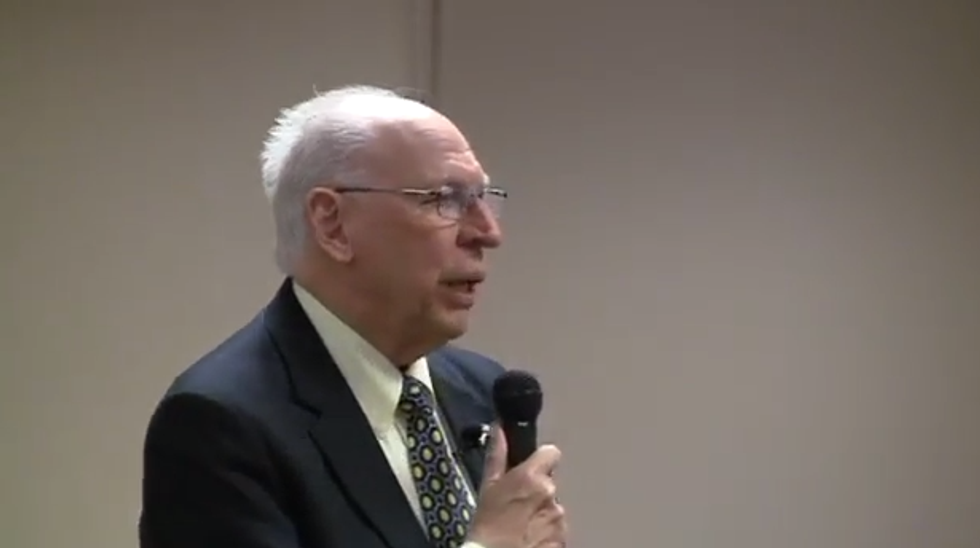 The tea party favorite’s father, the Cuban-born evangelical minister Rafael Cruz, has been promoting his son as a “political savior” and an antidote to the “outright Marxist” President Barack Obama.

During his son’s ultimately successful Senate campaign, Rafael Cruz said the president “seeks to destroy all concept of God” and urged the crowd to send Obama “back to Kenya.”

Rafael Cruz told a gathering of Colorado Republicans that, “if the winds shift, (Obama) will side with the Muslims,” citing a distorted passage from the president’s autobiography that’s been spread by chain email among conservatives.

The elder Cruz, a pastor affiliated with the Purifying Fire ministry, regularly speaks to tea party and Republican groups on behalf of his son, who frequently talks about and campaigns alongside his father, who’s risen to prominence alongside his son.

Talk radio behemoth Rush Limbaugh has praised the elder Cruz, and former Sen. Jim DeMint, who now heads the conservative Heritage Foundation, brought him along to help campaign against funding the Affordable Care Act – which the younger Cruz attempted to do by tying its implementation to a federal budget resolution.

Rafael Cruz told an April gathering of tea party supporters in Hood County, Texas, that the “wicked,” including so-called Republicans In Name Only, were ruling the United States, and made his often-repeated claim that Obamacare would mandate suicide or stoppage of treatment for elderly patients.

Saying “social justice is a cancer,” the elder Cruz also claimed at the gathering that the federal government wanted to “take all of your money” and confiscate “our fortunes.”

Which is rather ironic, since Rafael Cruz has endorsed an evangelical belief known as the “end-time transfer of wealth” from the wicked to believers prior to the second coming of Christ.

The younger Cruz often cites his father’s influence on his own political philosophy, which includes exposing him to the Free Enterprise Education Center as a middle-schooler and encouraging him to participate in the Constitutional Corroborators group as a teen, and has touted his abilities as a skilled campaigner.

“My dad poured himself into my Senate race last year,” the younger Cruz told National Review Online. “In the early months, we didn’t have much of a campaign. One day, I couldn’t make an event, so he drove out to West Texas alone — no staffers, nothing — and he spoke on my behalf. A few hours later, I called and asked how it went. He said, ‘Even surrogates for the other candidates were asking for Cruz yard signs.’”

So while it may sound silly to those who deride Cruz to hear him described as a “superhero” who is willing to “be crucified for (who) belief system,” that’s how he’s seen in some quarters and promoted by his father.

The elder Cruz has frequently declared that Christian true believers were “anointed” by God to “take dominion” of “every area (of) society, education, government and economics.”

Several prominent Dominionist pastors blessed Ted Cruz in a July ceremony in Iowa, anointing the likely 2016 presidential candidate a “king” who would help usher in the kingdom of Christ.

And the senator's father, who wields influence over his son and Republican kingmakers, apparently agrees.

Watch this video of Rafael Cruz speaking to the Hood County Tea Party posted on YouTube by Richlon Merrill: