'60 Minutes' correspondent: 'We made a mistake' on Benghazi report, and 'we were wrong' 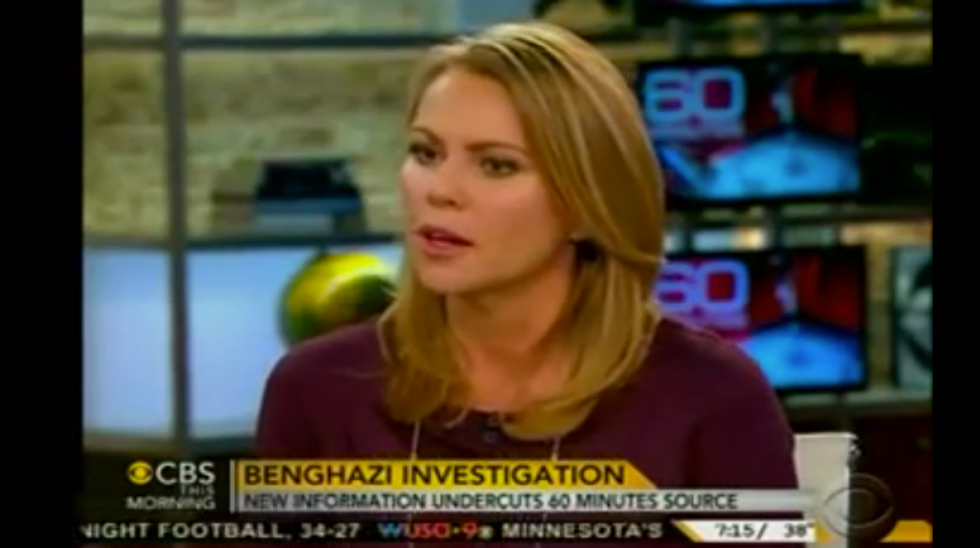 CBS News will issue a correction for its Oct. 27 "60 Minutes" report on the terrorist attacks on a diplomatic compound in Libya, and the correspondent who reported the story has apologized to viewers.

The story began to fall apart when the Washington Post reported that Dylan Davies, the former State Department security contractor interviewed under pseudonym on the program, had told his employers in a post-incident report that he’d been nowhere near the Benghazi compound when it came under attack.

The CBS program had described Davies as “a security officer who witnessed the attack,” and Republicans seized on his account to undercut claims made by the Obama administration about security at the compound and the White House understanding of potential threats faced by the personnel stationed there.

Davies claimed that he’d misrepresented his actions to his employer because he’d been ordered to stay away from the compound after he’d been told of the attack by telephone, and CBS defended its source and the report based on his claims.

Logan said Davies had told her up front that he'd lied to his employer about his actions during the attack.

"The context of it, when he tells his story, is that his boss is someone he cared about enormously," Logan said. "He cared about his American counterparts in the mission that night, and when his boss told him not to go, he couldn't stay back, so that was always part of the record for us, and that part didn't come as any surprise."

But the network began backing away from both Thursday after the New York Times reported that Davies had also told the FBI that he hadn’t been at the Benghazi compound during the Sept. 11, 2012, attack.

“After an incident report surfaced that told a different story about what he'd done that night and, you know, he denied that report, and he said that he told the FBI the same story that he had told us, but what we now know is that he told the FBI a different story to what he told us,” Logan said. “And, you know, that was the moment for us when we realized that we no longer had confidence in our source, and that we were wrong to put him on air, and we apologize to our viewers.

Logan said the network confirmed who Davies was and where he’d worked at the time, and also that he was in Benghazi at the special mission compound on the night of the attack, and she said he also provided CBS with communications he’d had with U.S government officials.

But she says that Davies misled her and her producers.

“We were wrong, and that's the important thing,” Logan said. “That's what we have to say here. We have to set the record straight and take responsibility.”

60 Minutes had already acknowledged that it had been wrong not to disclose that Davies made similar claims in a book he recently published with Simon and Schuster, another CBS company.

Fox News also said after the 60 Minutes report that its reporters had stopped working with Davies after he asked for money, although Logan denies that he asked CBS for money.

CBS will issue a correction on Sunday’s installment of "60 Minutes."