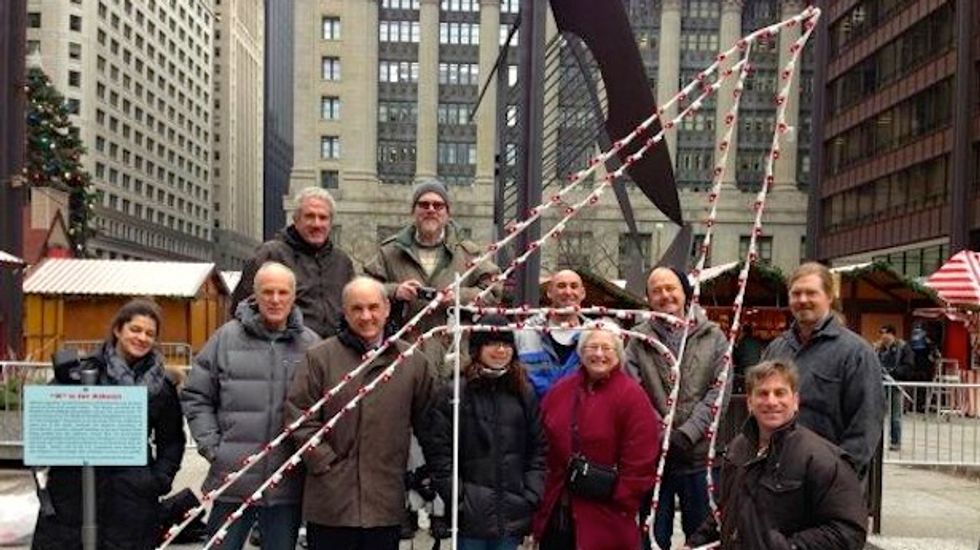 A Chicago atheist group set up a display Tuesday celebrating the Bill of Rights alongside the traditional life-sized nativity display at Daley Plaza.

The Freedom From Religion Foundation unveiled an 8.5-foot lighted “A,” which stands for “atheist,” in the public square in downtown Chicago to protest the annual Christmas display.

In front of the A, a symbol suggested by scientist and atheist activist Richard Dawkins, is a banner celebrating the “season of the Winter Solstice.”

“We celebrate the birth of the Unconquered Sun – the TRUE reason for the season,” the banner reads. “As Americans, let us also honor the birth of our Bill of Rights, which reminds us there can be no freedom OF religion, without having freedom FROM religion in government.”

The group’s display shows constitutional framers Benjamin Franklin, Thomas Jefferson and John Adams, as well as the Statue of Liberty, standing or kneeling in adoration of the founding document, which was adopted Dec. 15, 1791, lying in a manger.

The life-size nativity scene was first placed in Daley Plaza in 1985 by a group of local tradesman, and priests and clergy traditionally bless the crèche each year.

The ACLU sued to protest the display, and a federal judge ruled in 1989 that the plaza was a public forum.

“If the government is going to open up a public forum to religion, then it has to permit the nonreligious -- nearly 20 percent of our nation today -- to express our point of view as well,” said Dan Barker, FFRF co-president.

The chapter is also setting up 55 billboards in the Sacramento area that will show local residents saying they’re “Good Without God.”

The billboards, which are set to go up Friday, are intended to show other non-religious people they don’t have to hide their views.

"Doing good is my religion," says one sign, featuring Mashariki Lawson, who identifies herself on the billboard as a "humanist."

Watch this video of the display posted online by Lauryn Anna: