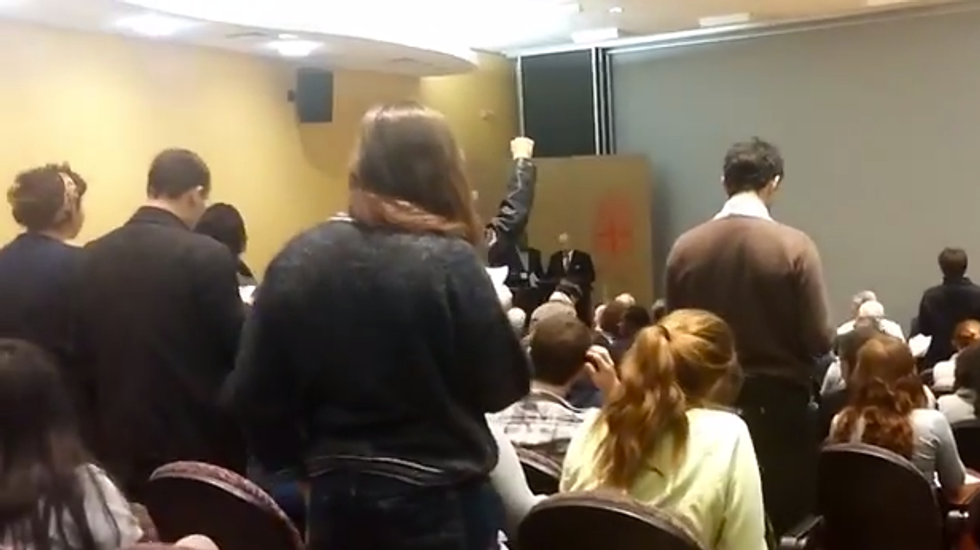 Audience members at the lecture by Ray Kelly rose up in their seats Oct. 29 and recited a statement opposing the New York police department’s stop-and-frisk policy, which a judge recently found unfairly targeted minorities.

The audience members also protested the department's surveillance of Muslims.

Officials at the Providence, Rhode Island, university had asked demonstrators to hold their comments until Kelly had finished speaking, but the hall was emptied when protesters continued to disrupt the scheduled event.

The university president said at the time that the disruptions had deprived the community of an opportunity to discuss an important social issue, and she hosted a forum the following day to discuss the episode with more than 600 students, faculty and staff.

"It is impossible not to empathize with our students who strongly object to stop-and-frisk policies and racial profiling,” said university president Christina Paxson. “Their feelings, in many cases based on personal experiences, are visceral, raw and genuine.”

But Paxson also said she empathized with students who were unable to question Kelly.

“These different points of view have resulted in an intense debate about whether, in some cases, disrupting a campus lecture is an acceptable form of protest,” Paxson said.

She decided that making an exception to the “principle of open expression jeopardizes the right of every person on this campus to speak freely and engage in open discussion,” and possibly violated Brown’s Code of Student Conduct.

“Protest becomes unacceptable when it obstructs the basic exchange of ideas,” says the code, of which all students must acknowledge. “Such obstruction is a form of censorship, no matter who initiates it or for what reasons.”

Paxson said picketing was one acceptable means of protest outlined by the code, but not interrupting or halting a debate, lecture or forum.

The president said she would establish a committee made up of five faculty members and three students to examine the incident, and students who are found to have violated the Code of Conduct could be disciplined.

Watch this video of the event posted by the Brown Daily Herald:

Scientist Svante Paabo won the 2022 Nobel Prize in Physiology or Medicine for his discoveries "concerning the genomes of extinct hominins and human evolution", the award-giving body said on Monday.

The prize, arguably among the most prestigious in the scientific world, is awarded by the Nobel Assembly of Sweden's Karolinska Institute and is worth 10 million Swedish crowns ($900,357).