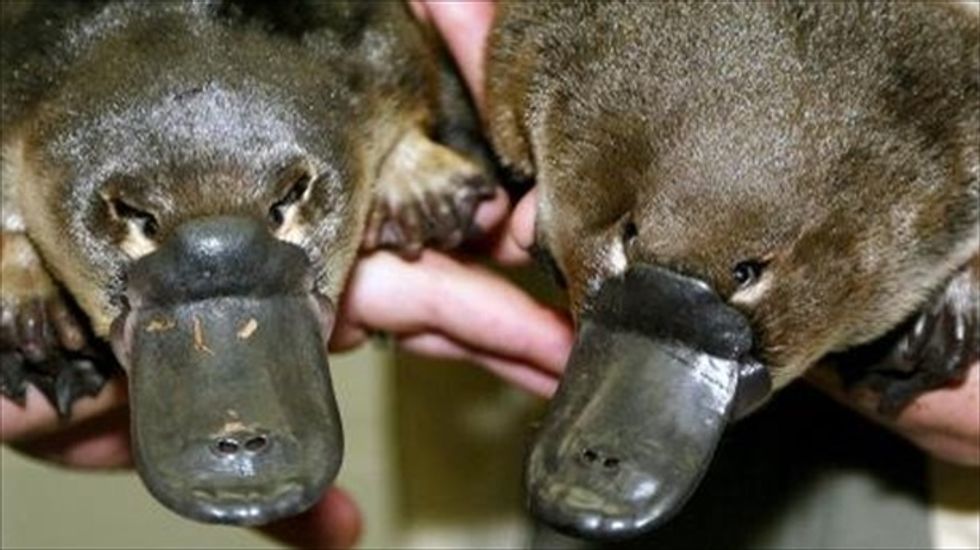 Scientists discover a tooth of what they believe was a giant duck-billed platypus, which evolved alongside today's species (pictured). [AFP]

A giant extinct species of the platypus with powerful teeth has been discovered in Australia, with a scientist on Tuesday describing the duck-billed water animal as a "Godzilla" like monster.

The new species, named Obdurodon tharalkooschild, was identified by a single but highly distinctive tooth found in Riversleigh in the northeastern Australian state of Queensland -- a World Heritage site rich in fossil deposits.

"It pretty well blew our minds," University of New South Wales professor Mike Archer told the Australian Broadcasting Corp. of the animal, which is estimated to be about twice the size of the modern platypus.

"And then bang out of the blue drops this monster. Platypus Godzilla."

Scientists had thought that the platypus, which combines bird, mammal and reptile characteristics, had gradually lost its teeth and become smaller over millions of years, but the latest find contradicts that theory.

"We didn't expect this. It's a huge platypus at the wrong time. But there it was," said Archer of the one-metre (three foot) species.

The modern platypus, a timid and nocturnal animal which lives in deep waterside burrows and is found only in eastern Australia, lacks any teeth as an adult and the scientists do not believe the new extinct species was an immediate ancestor.

"Discovery of this new species was a shock to us because prior to this, the fossil record suggested that the evolutionary tree of platypuses was a relatively linear one," Archer explained in a statement.

"Now we realize that there were unanticipated side branches on this tree, some of which became gigantic."

Archer said he was confident that the single tooth, which was discovered by Rebecca Pian, a PhD candidate at Columbia University in the United States, was sufficient evidence of a new species.

"We know it's a platypus, we also know it's very different from any other toothed platypus we've seen before," he said.

Pian, the lead author of the research published in the US-based Journal of Vertebrate Palaeontology, said any new species, even though incomplete, was an important aid in understanding more about the fascinating mammals.

The extinct species is believed to have been a mostly aquatic animal like its modern descendant and would have lived in and around freshwater pools in the forests that covered the Riversleigh area millions of years ago.

It probably fed on crayfish and other freshwater crustaceans, as well as small vertebrates such as frogs and turtles, said Suzanne Hand of UNSW's School of Biological Earth and Environmental Sciences.

Archer said scientists already had concerns about the long-term viability of the platypus and the discovery only added to these.

"It only says that there were more kinds of platypus that are now gone," he said.