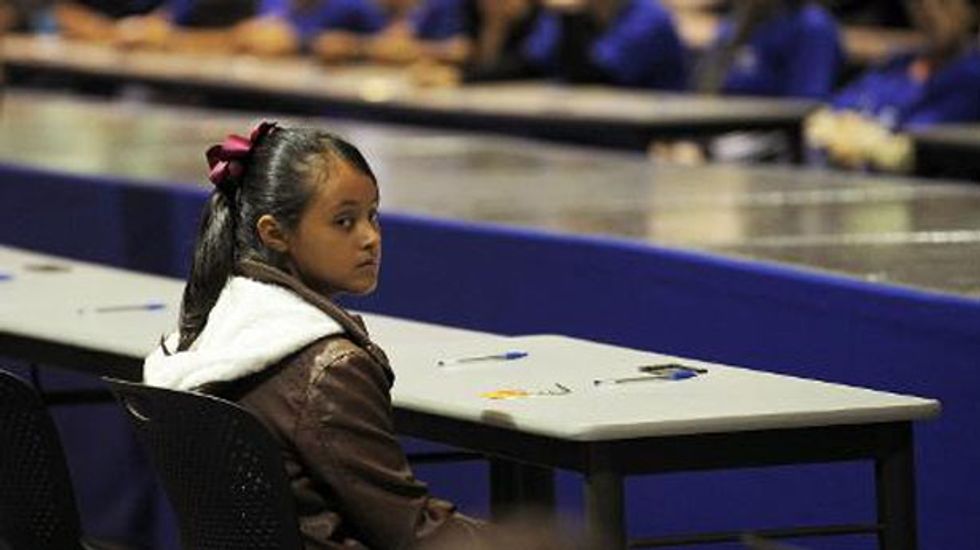 Mexico has found a new heroine: A 12-year-old math whiz from a state plagued by drug violence who was dubbed "The Next Steve Jobs" by a US magazine.

The youngest of eight children from a modest family, Paloma Noyola was thrown under the media spotlight since Wired magazine featured the black-haired girl on its cover two weeks ago.

She has appeared in national newspapers and on cable news, redubbed "La Nina Jobs" -- "The Jobs Girl" -- with photographers and cameramen chasing the girl nicknamed after Apple's late founder.

This week, she traveled from her hometown of Matamoros, in the northeastern state of Tamaulipas, to the hustle and bustle of Mexico City for a mental math competition.

With so much attention on the girl, Tamaulipas state officials who flew in with her shielded Noyola from the press pack.

She sat alone at a large table and was whisked away after the contest organized by the Tecnologico de Monterrey university ended. But she did not win the contest.

Last year, the girl whose school lies next to a dump across the US border wowed the country when she scored the maximum 921 in the national standardized exam, the best in Mexico.

Her father died of lung cancer last year and her family earns an income from selling scrap metal and food in Matamoros, a city tormented for years by a turf war between the Zetas and Gulf drug cartels.

While Noyola made the cover of Wired, it was her teacher's radical methods that featured prominently in the magazine's story.

Sergio Juarez Correa, 32, saw his entire class's Spanish and math scores dramatically improve after he implemented a new approach, allowing students to tap into their own curiosity and self-learning to solve problems.

While Noyola garnered attention for acing the national exam last year, nine other students scored more than 900 in the math test.

The school is located in a "punishment zone" for education, dubbed that way because no professor wants to be there due to the high level of crime and dismal infrastructure.

The school lacks basic services such as running water, drainage or a telephone line -- an all-too-common problem in Mexican classrooms.

"If Paloma had the same opportunities or open doors as Steve Jobs, she probably would be a genius in this subject," Juarez told AFP.

Two of Noyola's classmates disappeared midway through the school year without anybody knowing why.

"The Mexican education system is like a bus with broken seats, wheels in bad shape and a broken engine that must climb a hill," Juarez said.

The education system of Latin America's second economy ranks last among the 34 nations of the Organisation of Economic Co-operation and Development.

President Enrique Pena Nieto, who took office in December, pushed through an education reform in a country where less than half of high school students are expected to graduate.