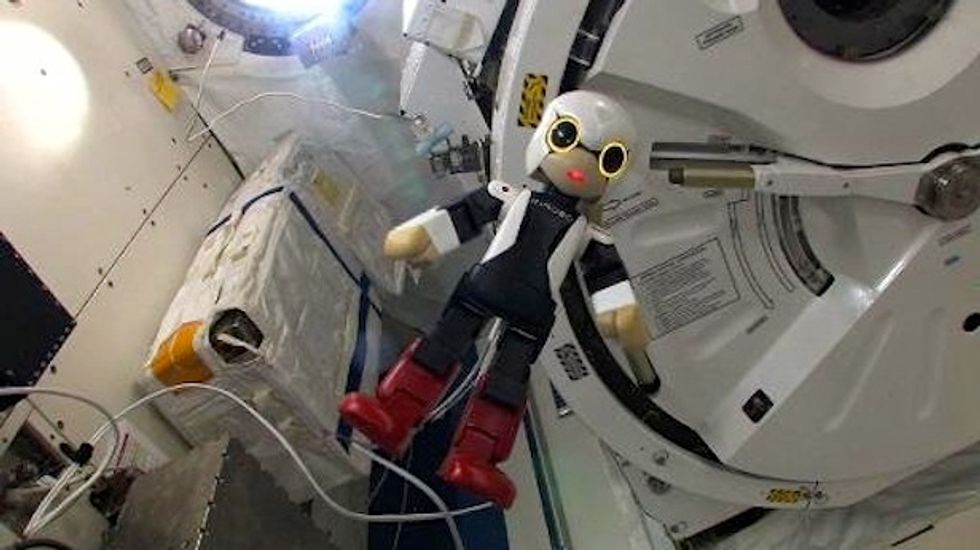 The world's first robot astronaut is pining for a conversation partner as he waits for Japanese spaceman Koichi Wakata aboard the International Space Station.

"Mr. Wakata, are you not here yet? I really want to see you soon," the pint-sized android said in a message released by its project team in Japan Wednesday.

The wide-eyed and bootie-wearing "Kirobo" -- roughly the size of a chihuahua -- left Earth on a cargo-carrying rocket and reached the space station on August 10.

"Good morning to every one of you people on Earth. I am robot astronaut Kirobo. I am the world's first talking robot astronaut. Nice to meet you," the automaton said in Japanese.

Wakata along with Mikhail Tyurin of Russia and NASA astronaut Rick Mastracchio will be aboard the Soyuz-FG rocket which will set off from Kazakhstan at 0414 GMT Thursday for a six-hour journey to the ISS.

Kirobo, which stands just 13.4 inches tall and weighs about 2.2 pounds, is programmed to communicate in Japanese and keep records of its conversations with Wakata, the first Japanese astronaut to command the ISS.

"My dream is to see human beings and robots live together as friends," the robot added. "I will talk to you a lot from space so please listen to my chats."

The humanoid was created jointly by advertising firm Dentsu, the University of Tokyo, robot developer Robo Garage and Toyota.

The robot is part of a study aimed at seeing how a non-human companion can provide emotional support for people isolated over long periods.