Maddow: Republicans getting even more out of step with America on same sex marriage 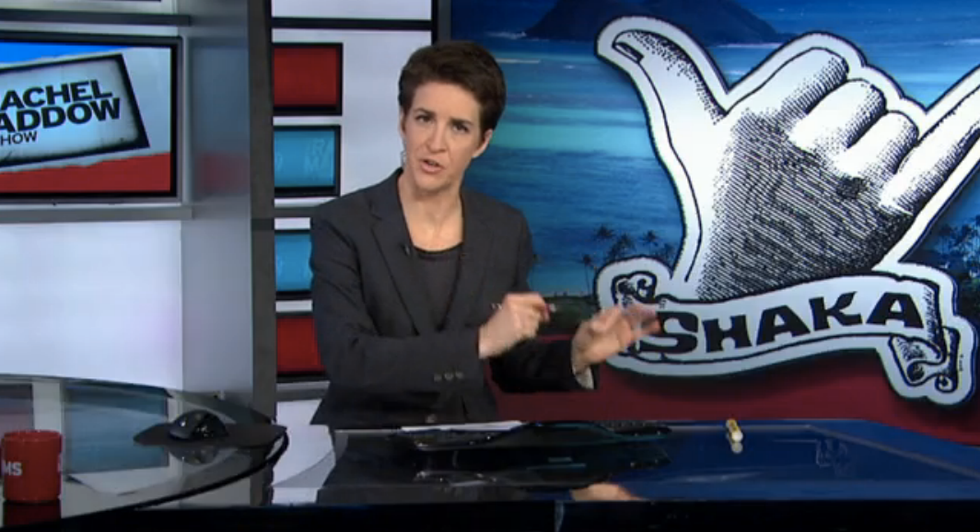 On Tuesday night's edition of her MSNBC show, Rachel Maddow added Hawaii to the list of U.S. states that have legalized same sex marriage. She also discussed how the spreading legalization of same sex marriage is alienating and infuriating many on the right.

Hawaii's state Senate ratified a bill on Tuesday legalizing same sex marriage in the state. The bill will now go to Democratic Gov. Neil Abercrombie, who is expected to sign it into law, making Hawaii the 15th state in the union to legally recognize the relationships between same sex couples.

"For same sex couples," Maddow said, "and also for Hawaii's caterers and florists and wedding photographers, well, there was much rejoicing. Aloha! Here come the brides!"

The cause of marriage equality, she continued, is advancing, and rapidly, not just in the courts. Polls show that a clear majority of U.S. citizens favor same sex marriage.

"That's where the country's at on this issue and it's getting more so all the time," she said. And strangely enough, when states legalize same sex marriage, all those dire warnings from people on the right about how same sex marriage would destroy society, those things are not coming to pass.

But, she said, there isn't a single national-level Republican who is willing to speak out in favor of same sex marriage rights. The entire party appears to have declared that a bridge too far.

She rolled video of Gov. Chris Christie (R-NJ) saying that even if his kids came to him and said they were LGBT, he would still love them, but oppose their right to marry.

"That's his position and it's an interesting thing," Maddow said, the country "has made its decision" on same sex marriage rights. But the Republicans are marching in the opposite direction.

Conservatives have been busy forming their own anti-gay version of the Boy Scouts and calling for "a second American revolution."

This weekend, one of the 2016 GOP's front-runners, Sen. Marco Rubio (R-FL) is speaking to a banquet hosted by one of the most virulently anti-LGBT groups in the country, the Florida Family Policy Council.

"These guys are supposed to be the Republican Party's way out of the demographic prison that the Republican Party is in," Maddow said, where the party's policies put it completely at odds with the largest and fastest growing constituencies of the U.S. electorate.

"Marco Rubio, Chris Christie, Rand Paul and all the rest of them," she said, "all of them are in lockstep with the Mick Huckabees and the Pat Robertsons on gay rights issues."

And that, she said, is only going to cause the party more problems in the future.