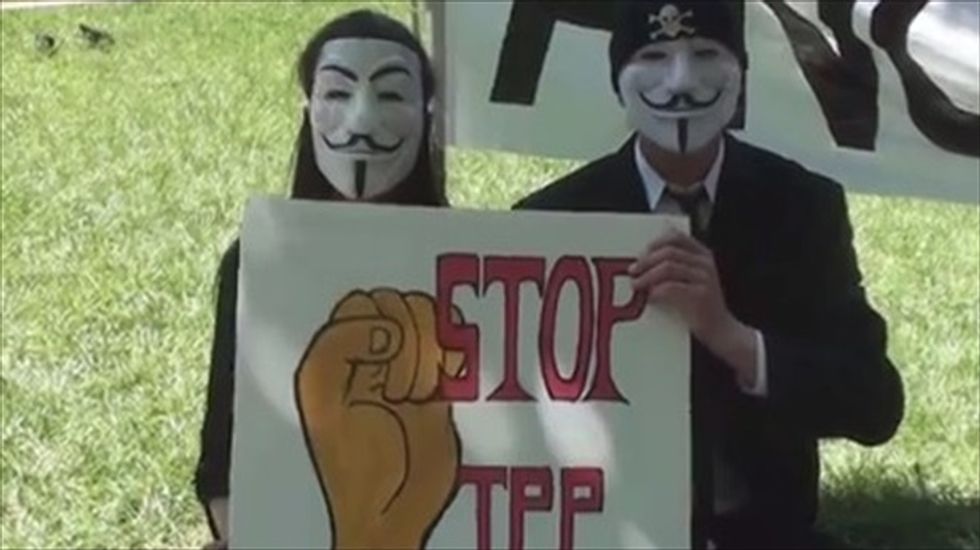 Demonstrations in more than 400 cities were planned to coincide with Guy Fawkes Day, with Russell Brand at a London protest

Protesters wearing the white-faced Guy Fawkes masks that have become synonymous with the Occupy movement and the hacktivist grouping Anonymous have taken part in hundreds of gatherings around the world in opposition to causes ranging from corruption to fracking.

Demonstrations in more than 400 cities had been planned as part of the event - billed as the "Million Mask March" - that coincided with Guy Fawkes Day.

One of the largest protests of Tuesday night took place in central London, where the comedian and advocate of "complete revolution" Russell Brand was pictured among crowds of people wearing a Guy Fawkes mask.

"Whatever party they claim to represent in the day, at night they show their true colours and all go to the same party," said Brand on Twitter, using the #MillionMaskMarch hashtag.

In Parliament Square, protesters burned energy bills to oppose the rising cost of fuel and there were minor clashes with police in riot gear as protesters also gathered near Buckingham Palace, where a fire was started yards away from its gates. No arrests took place, according to the Metropolitan police.

The numbers of those protesting in central London were swelled by a gathering on Westminster Bridge organised by the People's Assembly, an anti-cuts umbrella group whose "Bonfire of Austerity" was addressed by the Labour MPs Jeremy Corbyn and Jon McDonnell.

In the US, protesters in Washington DC gathered at the Washington Monument before walking to the White House to raise awareness of causes including opposition to mass surveillance and genetically modified foods. Other protests, of varying size, took place in cities including Vancouver, Tel Aviv, Dublin, Paris, Chicago and Sydney.

One of a number of Facebook pages for the event described it as a "Call for Anonymous, WikiLeaks, the Pirate Party, Occupy and Oath Keepers to defend humanity".

"Remember who your enemies are: billionaires who own banks and corporations who corrupt politicians who enslave the people in injustice," it added.

Watch footage from the "Million Mask March" in Melbourne, Australia, as posted online on Tuesday, below.