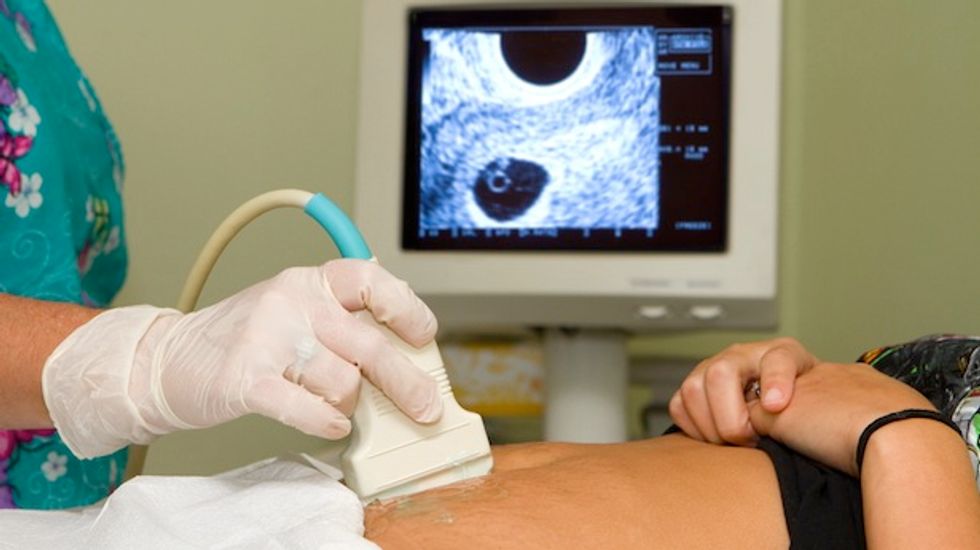 Sonographer technician holds an ultrasound transducer to diagnose the condition of a pregnant woman with a view of the woman's uterus on the computer screen. (Shutterstock)

Cincinnati could soon become the nation’s largest metropolitan area without an abortion provider as a result of new restrictions on clinics tucked into Ohio’s budget bill.

Lawmakers passed a two-year budget in June that includes a provision that prohibits abortion clinics, which are classified under state law as outpatient surgery centers, from forming a patient-transfer agreement with a taxpayer-funded public hospital.

By law, all outpatient surgery centers must have an agreement with a hospital that would accept the clinic’s patients in an emergency.

The new rule forces abortion clinics to enter patient-transfer agreements with private hospitals, and many of those – even ones that aren’t affiliated with religious groups – won’t accept an abortion clinic’s patients.

Without patient-transfer agreements, a Cincinnati Enquirer census analysis shows, 2.1 million people in southwest Ohio would be left without access to an abortion clinic.

Ohio had 14 abortion clinics at the start of 2013 and could soon be down to seven as three clinics closed in Akron, Cleveland and Toledo unrelated to the new rule.

Two other clinics, in Sharonville and Toledo, are hoping to avoid revocation of their licenses by the Health Department, and two others, in Cincinnati and Dayton, have asked for special permission from the state to remain open.

Nine other states have transfer agreement laws, but Ohio is the only state that specifies which type of hospital may enter in those agreements.

Both abortion-rights advocates and hospital administrators agree that hospitals would never deny an abortion patient who needed emergency treatment, but the new law is still leading to the closure of Ohio abortion clinics.

That’s exactly what pro-life groups expected when pushing for the new law.

Ohio Right to Life had publicized the University of Toledo Medical Center's transfer agreements with abortion clinics, and the taxpayer-funded university decided to end such arrangements.

"We've had a state law on the books for years that said taxpayer dollars can't be used to pay for abortions. But for that public hospital, that abortion clinic would not be open to perform that abortion," said Mike Gonidakis, director of Ohio Right to Life.

Lacking other options, one Toledo clinic closed and the other is appealing the state’s decision to revoke its license.

Ohio’s Department of Health may approve “variances” for outpatient surgery centers that would allow them to remain open without a patient-transfer agreement.

Two clinics in southwest Ohio had been operating under such a variance in recent years, but the health department had refused to renew one of those variances this fall.

Planned Parenthood's Elizabeth Campbell Surgical Center in Cincinnati’s Mount Auburn neighborhood had a transfer agreement with UC Health, whose charter allowed it to be considered a private, nonprofit entity despite being set up in 2010 by the public University of Cincinnati.

But the hospital terminated its agreement when the new transfer agreement laws went into effect, Oct. 1, saying the wording of the new law left them little choice.

A UC Health official said the new law could be interpreted to mean that hospitals operated by public entities are forbidden to enter transfer agreements with abortion clinics, and Planned Parenthood said several other area hospitals declined its request for a transfer agreement.

The Mount Auburn clinic may remain open while Planned Parenthood’s request for a special variance remains pending, but one operated by Women’s Med in nearby Sharonville has been operating for at least three years without a variance because its doctors are able to admit patients at area hospitals.

But the state official declined the variance last year, and the clinic is awaiting a decision on its appeal, as is a Dayton-area clinic operated by Women’s Med.

"The entire western part of the state is in danger of losing access to safe, legal abortion care, and it's because of politics," said Kellie Copeland, executive director of NARAL Pro-Choice Ohio.

Closures would also leave women in nearby southeast Indiana and northern Kentucky with limited access to abortion clinics.

Only two such clinics operate in Kentucky, more than an hour away from Cincinnati in Lexington and Louisville, and Indiana has only three, at least two hours away in Indianapolis and Fort Wayne.

"We'd be in a place where women who have financial means will have access to care and women who are poor will have a difficult time accessing abortion services," said Elizabeth Nash, of the pro-choice Guttmacher Institute.