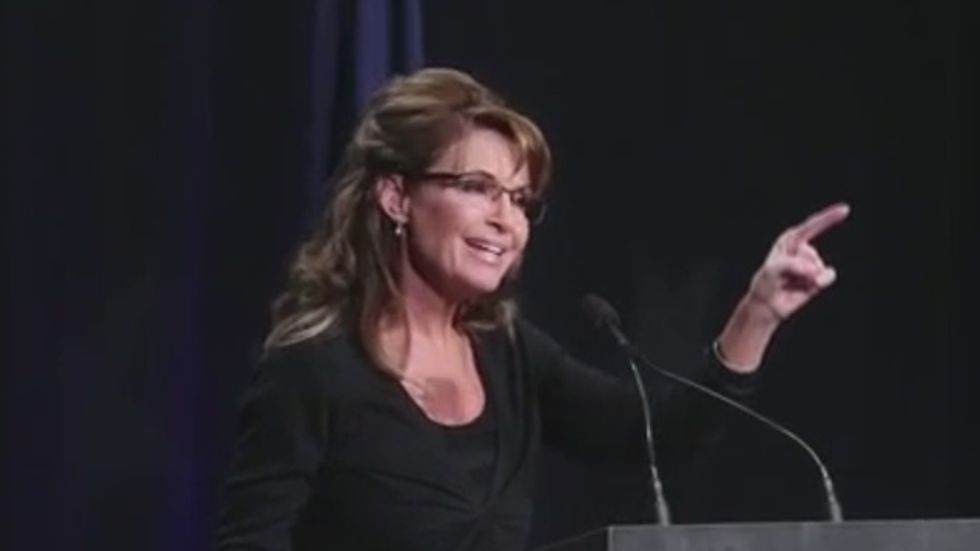 Former Alaska Gov. Sarah Palin called on a group of conservatives to act over the weekend because she said atheists, secularists and other liberals had launched a "war on Christmas" and were pushing the country into "slavery" by borrowing from China.

During a Saturday speech to promote her book "Good Tidings and Great Joy: Protecting the Heart of Christmas” at the Iowa Faith & Freedom Coalition's fall fundraiser, Palin observed that "everywhere it seems that we see that faith, religious freedom is under attack... and it's censored."

"You'll see it blatantly come this holiday season, around Christmastime it seems to really rear its head," she said. "The phrase 'war on Christmas' sounds like an oxymoron. I mean, how can there be a war about the holiday that celebrates the Prince of Peace? But Christmas is under attack... The traditional nativity scene banned from public display, lest that little plastic baby doll that's nestled in a dusty, hay-filled manger gives such offense to an angry atheist armed with an attorney."

Palin asserted that the "war on Christmas" was part of a larger battle waged by the "people who are too enlightened for religion."

"They're the very same people who have a zealot-like faith in their own church, which happens to be the church of big government," she continued. "That debt that's rising and growing so large that our kids and grand kids are never going to be able to pay it back. No, no matter how they spin it, those Orwellian double-speaking words that we hear so often today."

Palin warned the audience that they were up against liberals who would offer "a lure of free stuff."

In conclusion, Palin advised the audience to have faith that "God don't make no junk."