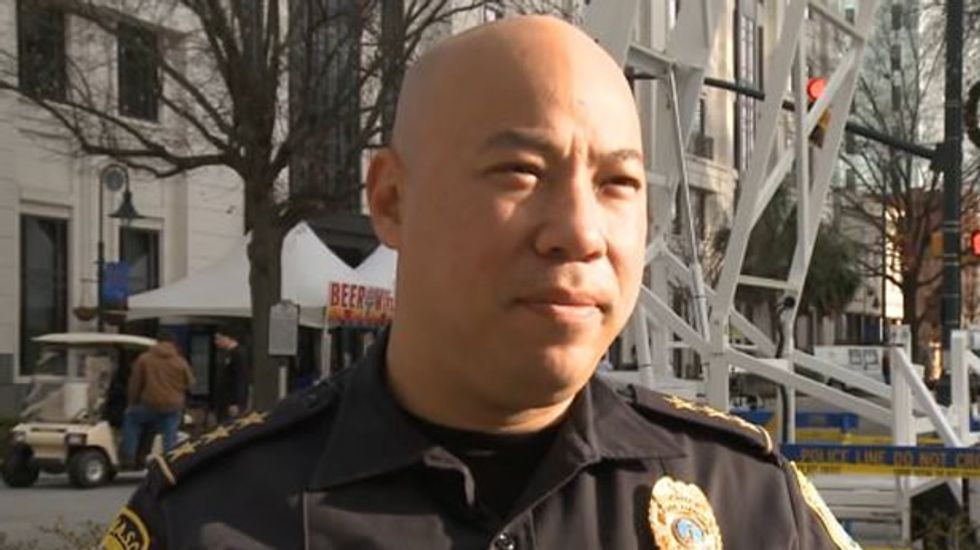 A South Carolina police chief threatened a resident with possible arrest Thursday for making pro-legalization comments about marijuana in a Facebook post about a drug suspect’s arrest.

Interim Police Chief Ruben Santiago announced on the Facebook page for the Columbia Police Department that officers had seized about $40,000 in marijuana from an apartment during a drug investigation.

But at least one person who follows the department’s social media page was less than thrilled, reported blogger Ken White at Popehat.

The blog posted a screen capture of a comment made by Facebook user Brandon Whitmer, who said, “maybe (police) should arrest the people shooting people in 5 points instead of worrying about a stoner that’s not bothering anyone. It’ll be legal here one day anyway.”

Someone with login credentials for the Columbia Police Department replied to Whitmer, saying, “(W)e have arrested all of the violent offenders in Five points. Thank you for sharing your views and giving us reasonable suspicion to believe you might be a criminal, we will work on finding you.”

That post was quickly deleted, the blog reported, but it was saved via screen capture by multiple Facebook users.

The department’s interim chief then identified himself in a follow-up comment made using the department’s account and said he’d made the post threatening Whitmer with possible arrest and blamed a subordinate for deleting it.

“I put everyone on notice that if you advocate for the use of illegal substances in the City of Columbia then it's reasonable to believe that you MIGHT also be involved in that particular activity, threat?” the chief said in his comment. “Why would someone feel threaten if you are not doing anything wrong? Apply the same concept to gang activity or gang members. You can have gang tattoos and advocate that life style, but that only makes me suspicious of them, I can't do anything until they commit a crime. So feel free to express yourself, and I will continue to express myself and what we stand for. I am always open to hearing how our citizens feel like we can be effective in fighting crime.”

The department’s public information officer confirmed to White that the interim chief wrote both posts but said Santiago’s point may have been misunderstood.

“Chief was trying to say that he puts would-be-criminals on notice -- if you commit a crime or plan to commit one, CPD will work hard to investigate and press charges according to the law,” said department spokeswoman Jennifer Timmons. “It’s easy for social media posts to be misunderstood. The man who was so-called threatened openly admitted that he was not offended and appreciated the work of CPD.”

Timmons told The Raw Story that Whitmer made his comments in a subsequent Facebook post, but all of his comments in that thread, including the original post, have since been deleted.

The public information officer also said Friday afternoon that Santiago had contacted Whitner personally about his comments, which Timmons said were not intended to be malicious or offensive.

Timmons also noted that Santiago started the Facebook page and interacts with commenters to engage the public and to help educate them on police matters.

Santiago filed a defamation suit in July against a police captain who accused him of plotting to plant illegal drugs and a stolen weapon inside a top city official's vehicle.

Watch this video with Chief Ruben Santiago being introduced to the media earlier this year.