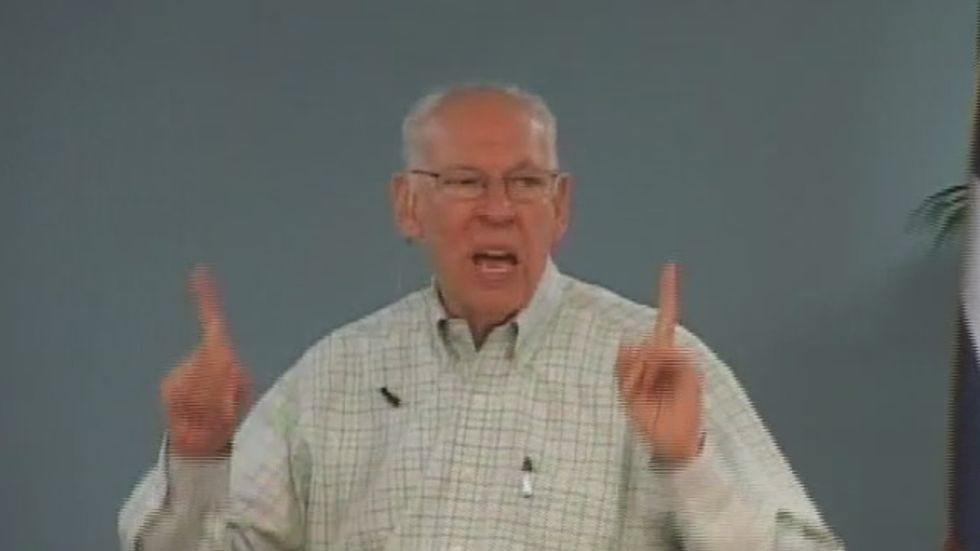 Rafael Cruz, the father of tea party-backed Sen. Ted Cruz (R-TX), has warned Americans that equal rights for LGBT people and the theory of evolution are essentially communist lies that are being used by the American government to destroy the family and control the population.

In a June presentation to the Dean Bible Ministries Men's Prayer Breakfast, Cruz encouraged attendees to become part of the political process.

"You know, communism or socialism, whatever you want to call it, what is happening in this country is not different than what happened in Cuba," he explained. "It is about government control of your lives. You got to realize how Marxist, how socialism works... When you hear all these things about homosexual marriage, this has nothing to do with homosexual rights. Did you know that?"

The Republican senator's father went on to say that marriage equality was "just like evolution."

"I’ve met so many Christians that tell me, ‘Evolution is a scientific fact.’ Baloney!" he exclaimed. "I am a scientist, there is nothing scientific about evolution. But you know something, Karl Marx said it, ‘I can use the teachings of Darwin to promote communism.’ Why? Because communism, or call it socialism if you think communism is too hard a word, necessitates for government to be your god and for government to be your god they need to destroy the concept of God."

"That’s why communism and evolution go hand and hand. Evolution is one of the strongest tools of Marxism because if they can convince you that you came from a monkey, it’s much easier to convince you that God does not exist," Cruz insisted.

Angelina Jolie accuses Brad Pitt of assaulting her in aircraft lavatory — then beating their kids: lawsuit

On Tuesday, The Daily Beast detailed stark new claims of physical abuse alleged by movie star Angelina Jolie against her former husband Brad Pitt in a cross-complaint filed as part of litigation over their control of a winery.

The dispute has been acrimonious, with Pitt alleging that the sale of the winery to a Russian oligarch was calculated to "harm" him — but Jolie is escalating, and she described in vivid detail an alleged assault by Pitt against her and two of their six children on a private jet in 2016.