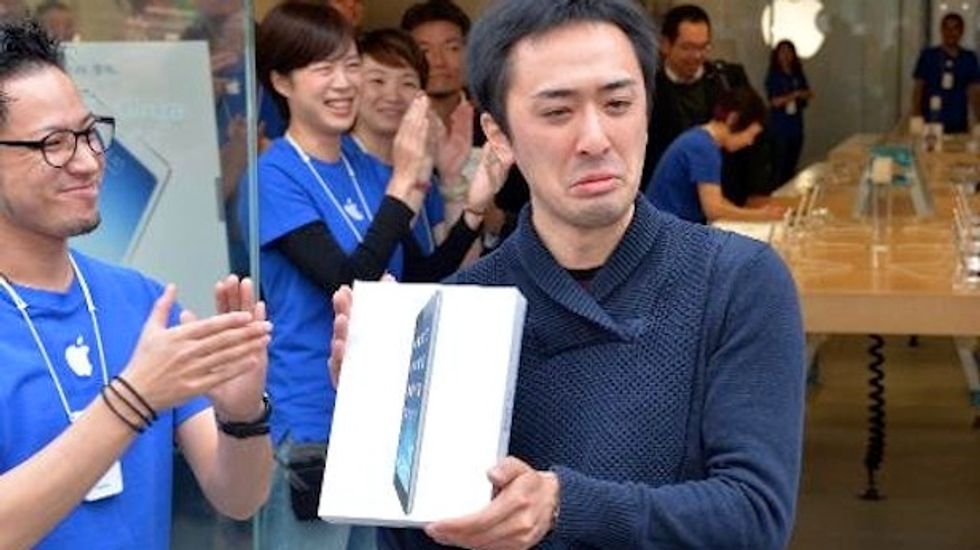 For one Japanese man, being at the front of a Tokyo queue as the new iPad debuted around the world Friday was his way of saying "thank you" to Apple after a year that turned his life around.

Takaaki Sasaki was one of hundreds who poured into Apple's flagship store in the glitzy Ginza district as the doors opened on the latest tablet offering from the sector's agenda-setter.

The launch had little of the razzmatazz of previous iPads or iPhones, with potential customers perhaps swayed by a critical reception that was largely positive but dominated by the theme that the iPad Air was no game-changer.

The worldwide rollout kicked off Down Under, with Apple in Australia saying there were queues outside its stores when the doors opened, with several hundred people reportedly lining up outside its flagship Sydney outlet.

At the sprawling, three-story Apple shop in downtown Beijing -- the largest Apple store in Asia -- each customer was greeted with cheers and applause from around 25 employees in bright blue shirts, with another dozen workers standing ready to give a second round of applause at the cash registers downstairs.

"We are not too worried as we still see a steady stream of customers coming in to get the iPad this morning," he said.

The new iPad Air is thinner than the version it replaces, weighs around one pound, and is "screaming fast," Apple vice president Phil Schiller said at the unveiling in San Francisco on October 23.

Apple also unveiled an upgraded iPad Mini, which has a vividly rich retina display along with faster computing power and graphics.

Both new iPads feature the Apple-designed A7 chip with 64-bit "desktop-class architecture," the company said. The Mini will go on sale later in the month.

Reviewers have generally been positive about the upgrades, with website TechCrunch labeling them "a huge improvement," while Time said the Air was "so much svelter."

Damon Darlin in the New York Times summed up the feelings of many with a review that lauded the Air's lower weight, thinner profile and souped up operating system.

But, he said: "I can't really tell you to replace your old iPad; the improvements on the new one are incremental, not revolutionary."

However, in Japan, home to perhaps some of Apple's most enthusiastic fans, the launch had its usual fanfare and tales of people queueing for days.

Kodai Taguchi, a 20-year-old university student, said he has more than a dozen Apple products after "queuing every time a new version is released."

"As soon as I held the box, I could already tell how light it is," he said. "I think I like this the most among all my Apples."

For queue leader Sasaki, the open-air vigil had all been worth it.

"So many miracles have happened to me this year thanks to my Apple products," he said.

Tears filled his eyes as he held his iPad Air, surrounded by a clutch of Japanese journalists.

Unemployed Sasaki, who travelled from northern Iwate, said after years of drifting Apple had brought him a run of luck, when he wrote a hit app.

The app -- a searchable version of Japan's constitution -- was voted as the best in App Store's business category and its sudden rise to prominence became fodder for a book he authored in August.

"I wanted to show my gratitude to Apple by being first in line," he said.