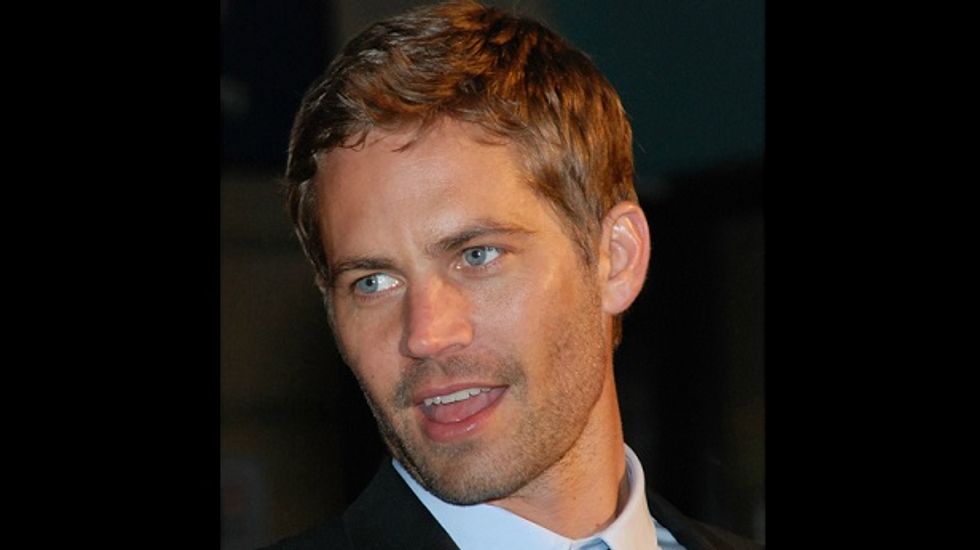 Paul Walker, 40, made famous in the "Fast & Furious" racing movies, died Saturday as a passenger in a sports car accident in Santa Clarita, Calif., near Los Angeles.

Details are emerging, but officers from the Santa Clarita station of the Los Angeles police were willing to confirm that two people were injured in a crash of a Porsche GT earlier Saturday.

The Santa Clarita Valley Signal website is showing the blackened wreckage of a red sportscar wrapped around a tree. The single-car crash occurred around 3:30 p.m. near a business park in the LA suburb, fire officials told the Signal.

The name of the driver has not yet been released.

A Facebook post from Walker's official page confirmed the news Saturday evening. "It is with a truly heavy heart that we must confirm that Paul Walker passed away today in a tragic car accident while attending a charity event for his organization Reach Out Worldwide. He was a passenger in a friend's car, in which both lost their lives. We appreciate your patience as we too are stunned and saddened beyond belief by this news. Thank you for keeping his family and friends in your prayers during this very difficult time. We will do our best to keep you apprised on where to send condolences."

A tweet from New Regency, the studio producer of the "Fast and Furious" franchise, confirmed the death, saying, "It is with great sadness to report that @RealPaulWalker has passed away. We will miss you. #RIP"

Given the prevalence of Internet celebrity death hoaxes, particularly around slow-news holidays like Thanksgiving, initial reports of Walker's death were tempered and tentative. Incredibly, a report from media satire site Mediamass dismissing news of Walker's death as a hoax began to be reposted in comment sections of legitimate news stories as a refutation of the supposed rumor, complicating initial news gathering.

But as reports from TMZ, Deadline and JustJared.com began to trickle in Saturday evening, credulous reporting began confirming the details.

The first mention of the accident, however, may have been on the site "tfw2005.com," a relatively-obscure Transformers movie forum. In a post "Paul Walker might be dead," a forum denizen wrote, "So I work in Santa Clarita at an automotive performance shop and a good customer just came from Paul's shop, AE (Always Evolving) where they were having a car show. It seems Paul went for a ride in a guys Porsche and they ended up around a phone pole, the car burst onto flames and rumour has it Paul is dead. I hope he got it wrong but he insists it was Paul. I'm reluctant to post this being just hearsay, but the guy who informed us is a wealthy car enthusiast that just pulled up in his Maserati and nothing to gain from a lie, and has video on his phone of the burning car. If it does turn out to be true, damn... RIP Paul."

Walker had a movie opening Dec. 13 called "Hours." The tagline: "A father struggles to keep his infant daughter alive in the wake of Hurricane Katrina."

Watch a trailer for the movie below.