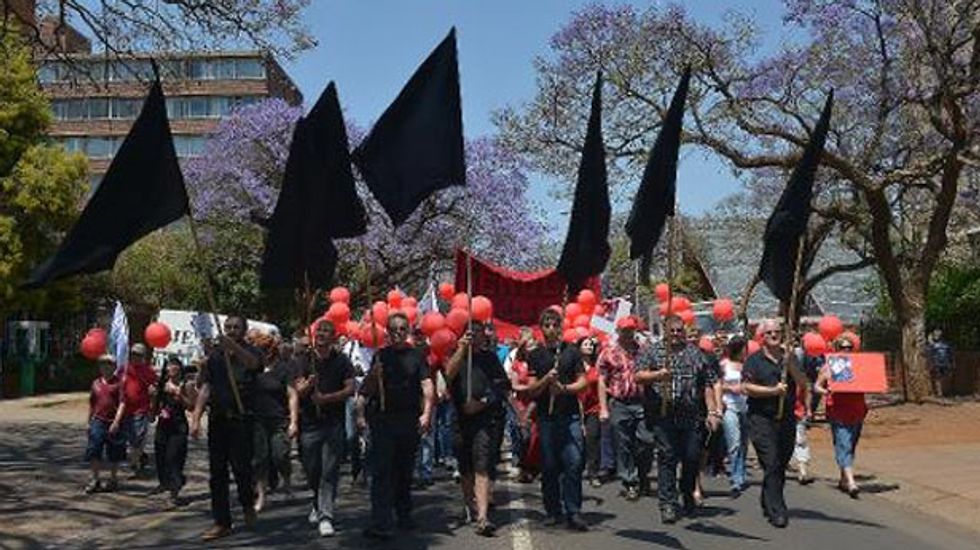 Dirk Smit's reaction to the death of Nelson Mandela, it would be fair to assume, puts him in the minority of South Africans. "Sort of indifferent, to be honest," he said flatly of his feelings. "Calling him a terrorist was a fair comment. What we shouldn't forget is that he also killed a lot of people. The bombings and all that crap."

To criticise Mandela in these days is a subversive act, as politically contrarian as declining to wear a poppy on Remembrance Sunday is in Britain. The country's first black president, already immortalised with statues, on bridges and on banknotes, is the subject of rolling eulogies on television and radio channels and he will be prayed for at church services up and down the country on Sunday.

But scratch the surface and among white South Africans – about 9% of the population – there is a mosaic of views. Many have flocked to Mandela's home in the upmarket Johannesburg suburb of Houghton to lay flowers and shed tears. The great majority of Afrikaners (white peoples of predominantly Dutch, German and French Huguenot ancestry) interviewed by the Observer in Benoni, a former gold-mining town east of Johannesburg, expressed sorrow at his loss and admiration for his ability to bridge the nation's racial divide.

But several also spoke of a deep-rooted fear that Mandela's death could dismantle the social pact of 1994 and lead to persecution, or worse, of the white minority. And a small fraction echoed the views of the marginal rightwingers who yearn to rekindle racial apartheid.

"I didn't agree with any of his opinions or statements on things," said Smit, walking through Benoni's nondescript town center with his girlfriend. "In general, I would say the country is not better than it was in 1994. It's much worse. Crime is just ridiculous, healthcare is terrible now – you can't use public systems any more – and the roads are bad. The poor are still poor and life for the middle class has gone backwards."

And the rainbow nation? "There's still a division between the races in this country. You go to any function and see the people are split. I have some black friends, but 99% of my friends are white because we share the same culture."

There has long been an urban myth, fanned by the internet in recent years, that Mandela's death would be the trigger for a so-called "night of the long knives" in which whites would be wiped out. Some, it is said, have undergone military training to defend themselves and have even stockpiled cans of food in bunkers.

Smit added: "On the day after Mandela died, I joked to my colleagues, 'I'm so glad to find you all at work.' If you listen to the stories, they might try to get rid of us all. We might be facing a genocide for all I know. It's a possibility, but I doubt it."

Mandela's release from jail, and the democratic election of 1994, ended more than three centuries of white colonial and apartheid rule. But instead of seeking vengeance, Mandela reached out.

He studied his captors, learned the Afrikaans language and invited one of his white prison wardens to his inauguration. He visited the widow of Hendrik Verwoerd, the architect of apartheid, and embraced the Afrikaners' beloved rugby at the World Cup. Fears that Mandela would seize white-owned farms and businesses also proved groundless, allowing whites to retain many of their economic privileges today.

All of this made him hugely popular among those whites dealing with complex feelings of guilt, vulnerability or resentment. Much more popular, in fact, than his political heirs in towns such as Benoni, in Gauteng province, founded on the East Rand in 1881 and named after Rachel's biblical "son of my sorrows". Its most famous alumnus is the Hollywood star Charlize Theron.

Alan de Klerk, 47, wearing a green Springbok rugby jersey, was shopping at the Lakeside mall, built in the ostentatious shape of a Mississippi steamboat. "Heartsore" was how he characterized his reaction to Mandela's demise. "You guys overseas don't understand the culture in this country. He brought unity, something we never had here.

"There was a lot of hatred, but the attitude when he came out of jail was reconciliation. He could have started a civil war like the rest of Africa. Black and white would have stood up to each other. I don't think any other leader could have pulled off what he pulled off. There will never be a war of black and white again."

Nardus Coetzee, 56, a self-employed mechanic, recalled: "I was one of those against the African National Congress (ANC) and I was still a young man when he was released. When I got to know him through television I changed my opinion of him. He was not as bad as they told us he was. He stood up for all the people, not just the blacks."

But Eric Bruun, a 71-year-old printer, dissented from the national mood, insisting that Mandela was no hero. "Years ago they blew up places and killed innocent people. They called themselves freedom fighters."

The prospect of a post-Mandela white purge is ludicrous in mainstream opinion. Yet it retains a foothold in the minds of a significant minority. Madeleine Prollus, 24, a pre-school teacher, said: "They always talk about the night of the long knives. We're quite scared about it. Mandela was always the one who said he wouldn't allow it to happen, but now he's gone."

Washing a car on a suburban Benoni street of detached houses, high walls, kempt lawns and grass verges, shaven-headed Peter Botha, 39, a prison dog handler, said: "Our children are worried. They're waiting for 10 days to pass, then they think it will be bad. But I don't believe it myself."

Like any country, South Africa has a small number of extremists. In October a few hundred demonstrators waved apartheid-era flags and posters of murdered farmers in a march dubbed "Red October" in the capital, Pretoria. Later that month 20 white supremacists who had once plotted to assassinate Mandela were sentenced after being convicted of high treason.

Speaking by telephone from Kimberley in Northern Cape province, Andre Visagie, a close friend of the notorious white supremacist Eugene Terre'Blanche, who died in 2010, said: "We have changed from a first world to a third world country. We are the rape capital of the world. Corruption has gone to levels among the worst in the world and economic growth is down.

Visagie, 59, a farm owner and leader of the Covenant People Republicans, a group which is seeking independent republics for each "nation" of people in South Africa, warned: "We foresee there will now be an accumulation of violence against white people. Anarchy will become a regular thing. Our advice to people is don't get involved in conflict; take your firearms and shoot your way to safety as a last resort."

Few South Africans of any race believe this will happen. Mandela's death has visibly unified people far more than it has divided them. The coming days will bring thousands of citizens of all colors to his memorial service and to see him lying in state. FW de Klerk, the last white president, remarked last week that the majority of Afrikaners "have very warm feelings towards Nelson Mandela and will pay tribute to his heritage".