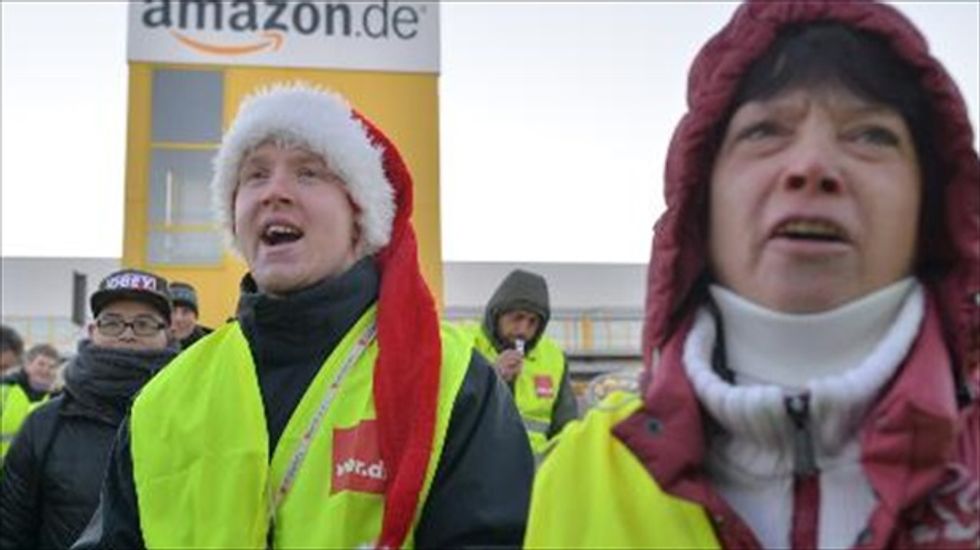 Employees of internet retail giant Amazon stage a strike in front of the company's logistics center in Leipzig, eastern Germany, on Dec. 16, 2013 [AFP]

Just days before Christmas, German workers at online retailer Amazon walked off the job over pay on Monday at three sites and supporters rallied at the company's US headquarters.

More than a thousand employees at Amazon sites in Leipzig, Bad Hersfeld and Graben went on strike to call for the company to align its salaries with the rest of Germany's retail and mail-order sector.

A spokesman for Germany's service sector union Verdi said 600 workers -- out of 3,300 -- had walked off the job in Bad Hersfeld, the biggest Amazon hub in Germany, with more actions expected Tuesday and Wednesday.

In Leipzig one-quarter of the site's 2,000 workers took part in the movement with workers expected to strike through Saturday.

In Graben, about 350 workers staged walkouts with more expected to join, Verdi said.

Amazon said that 1,115 workers had chosen not to come to work Monday, out of 23,000 employees at its logistics centers, including 14,000 temporary employees hired for the year-end holiday season.

"The vast majority of our workers in Germany are not participating in these strike activities," Mary Osako, an Amazon spokeswoman, said in an email.

"Amazon did not see any impact on customer shipments."

Verdi has been trying for months to bring the pay of Amazon's 9,000 workers in Germany in line with wages in the distribution sector.

Amazon refuses, arguing that its distribution centers are logistics sites and that it pays its staff accordingly. Wages in the logistics sector in Germany are lower than in distribution.

Germany is Amazon's biggest market outside the United Sates, but months of labor action, as well as a scathing TV documentary broadcast earlier this year, have tarnished the company's image.

As problems accumulate in Germany, in October Amazon said it planned to open two distribution centers in the Czech Republic by the end of 2014.

The centers are a response to increased demand across Europe, Amazon said at the time, adding that it chose the Czech Republic for its prime location in the heart of Europe.