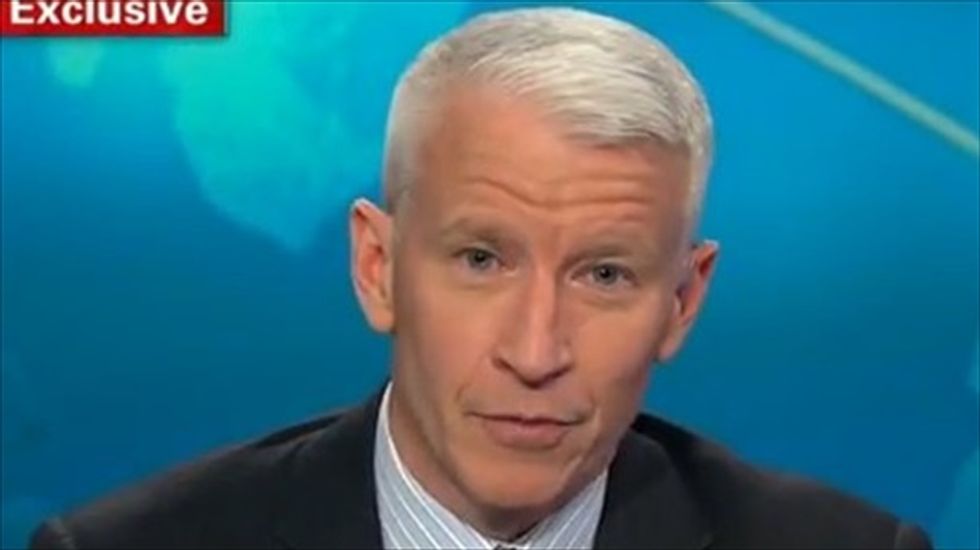 CNN host Anderson Cooper grilled the psychologist who testified in court that the 16-year-old Texas drunk driver who killed four people suffered from "affluenza" and could not be held responsible for his actions.

Cooper pointed out to guest G. Dick Miller that District Judge Jean Boyd sentenced a 14-year-old poor Black teen to a 10-year-sentence within the state's juvenile justice system, while Miller's client, 16-year-old Ethan Couch -- an affluent white teen -- was given an extended probation in what Cooper described as resort-like conditions.

"Why is that okay for a 14-year-old poor kid, but for a 16-year-old well-off kid, they get to go have equine therapy," Cooper asked Miller. "Does that seems fair?"

"There actually are Black people who have money, Anderson," Miller responded. "I don't know why you continue to make this a racial thing. I treat all races."

Prosecutors argued for Couch to receive the maximum 20-year sentence for his actions on June 15, when he killed Hollie and Shelby Boyles, Breanna Mitchell and Brian Jennings. According to CNN, Couch reportedly told a passenger in his old car, "I'm Ethan Couch, I'll get you out of this."

The Boyles and Jennings were helping Mitchell, whose vehicle had broken down, when Couch crashed into them. His blood-alcohol level was later measured at 0.24, more than three times the legal limit for adults. CNN reported that the family of another victim, Sergio Molina, are filing a separate suit against Couch's family. Molina was left paralyzed after the crash.

Miller testified that Couch's parents used him as a tool for power grabs within their relationship while they were together, causing the teen to practically raise himself and use money to settle disputes instead of apologizing.

But CNN and Think Progress reported on Thursday that Boyd has handed out harsher sentences for Black teenagers, including the 14-year-old, who admitted to punching a man, resulting in his death after the man's head hit concrete.

"I trust that judge and I don't know what the conditions were," Miller told Cooper on Thursday.

"So you don't believe that this is a prime example that there's a separate system of justice if you have money?" Cooper asked.

"I don't agree with you on that, of course," Miller answered. "I do believe that -- just like you and I talked yesterday -- if you have a lot of money, you get people with more skills. You get a better singer. We have you tonight; I'm sure that you make more than the local guy here. That's just the way the world works. And there's some good things about that, some not-so-good things."

Watch the interview, as aired on CNN on Thursday, below.