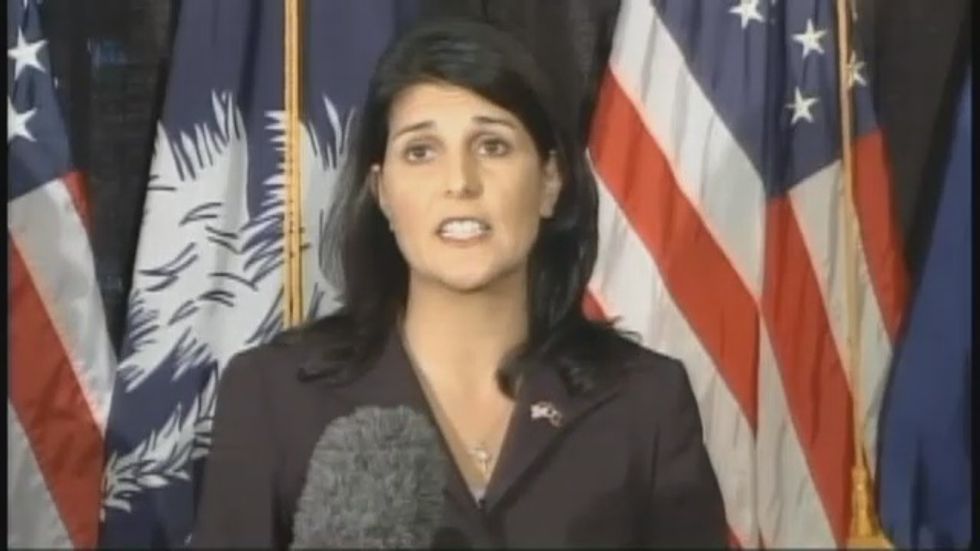 A federal appeals court ruled on Monday that South Carolina Gov. Nikki Haley (R) could be sued for violating the civil rights of Occupy Columbia protesters who were removed from the Statehouse grounds and arrested in 2011.

A month after the activists set up tents on the Statehouse grounds in October of 2011, Haley ordered the Bureau of Protective Services to arrest anyone who camped at the site past 6 p.m. in the evening. Officers eventually placed zip ties on the wrists of a number of protesters and took them to Alvin S. Glenn Detention Center.

Trespassing charges against the protesters were dropped two weeks later.

In the Monday ruling, the court found that Haley had violated the civil rights of the protesters because there was no regulation in place preventing camping on the Statehouse grounds.

The state Budget and Control Board, which is chaired by Haley, eventually did create emergency regulations against camping.

"In light of the case law from this circuit and from the Supreme Court, it was clearly established on November 16, 2011, that arresting Occupy Columbia for protesting on State House grounds after 6:00 p.m. was a First Amendment violation," Circuit Judge Stephanie D. Thacker wrote.

"It is not disputed that South Carolina and its state officials could have restricted the time when the State House grounds are open to the public with a valid time, place, and manner restriction," the court said. "However, as explained above, at the time of Occupy Columbia's arrest, no such restrictions existed."

Just hours before the arrests in 2011, Haley had complained that she had seen "toilet paper in the bushes, sleeping bags."

"Protest and do whatever you want to do during daylight hours. As of 6 o'clock, everyone's property needs to be off," she warned. "We go by the rule of law. We are not California, we are not NY, we are SC and we believe in the respect of property and citizens."