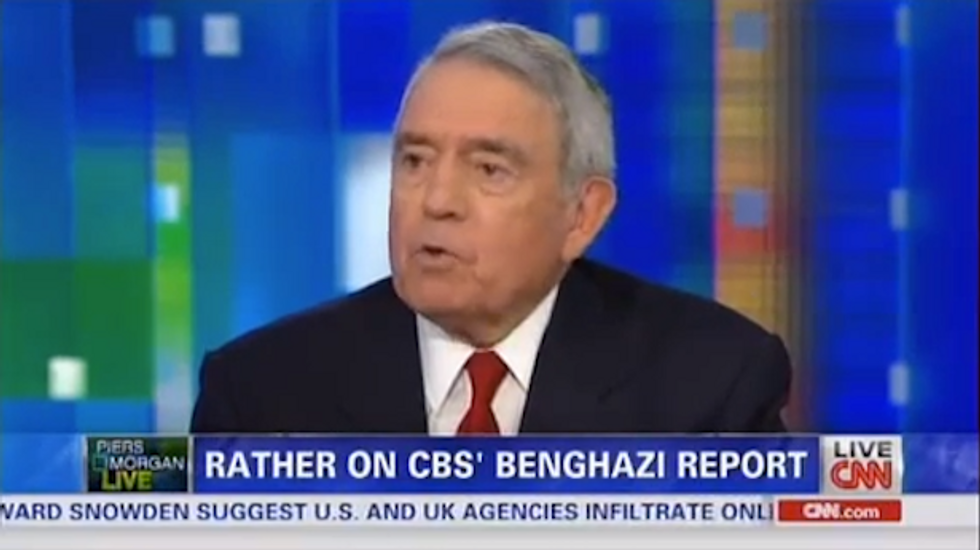 Former CBS anchor Dan Rather says Lara Logan should keep her job, but he said there was a key difference between the erroneous “60 Minutes” report on Benghazi and the report that ultimately cost his job.

“With our story, the one that led to our difficulty, no question the story was true,” Rather told CNN’s Piers Morgan on Monday. “What the complaint was, was ‘Okay, your story was true, but where you got to the truth was flawed.’ That's not the case with the Benghazi story. Unfortunately -- and there's no joy in saying it -- they were taken in by a fraud."

The veteran newsman reported shortly before the 2004 election that President George W. Bush had received preferential treatment while serving in the Texas Air National Guard during the Vietnam War era.

After questions about the report’s sourcing were raised by bloggers, CBS later admitted it couldn’t authenticate documents that Rather had relied on to source his claims and fired three news executives and a producer.

Rather stepped down as CBS News anchor and left the network in 2006. A lawsuit he filed the following year was eventually dismissed.

Logan and producer Max McClellan were suspended last month after CBS was forced to issue a retraction to their Oct. 27 “60 Minutes” report based on statements provided by a security subcontractor who claimed he’d witnessed the terrorist attack on the U.S. diplomatic compound in Libya.

The story fell apart within days, when the Washington Post reported the subcontractor, Dylan Davies, had been nowhere near the Benghazi compound during the Sept. 11, 2012, attack.

Rather said Logan had taken the fall for the network news division’s failures because, as the reporter, she’s the face of the report.

“I don’t in any way want to add to the burden (because) I know what it feels like, what it feels like to be the correspondent who is the center of the controversy, when there are people both above and below you (with) plenty of questions asked,” Rather said.

He said that Logan had clearly been fooled by her source, but he hoped that the report wouldn’t derail her journalism career.

Watch Morgan's interview of Rather posted online by PoliticsNoww: