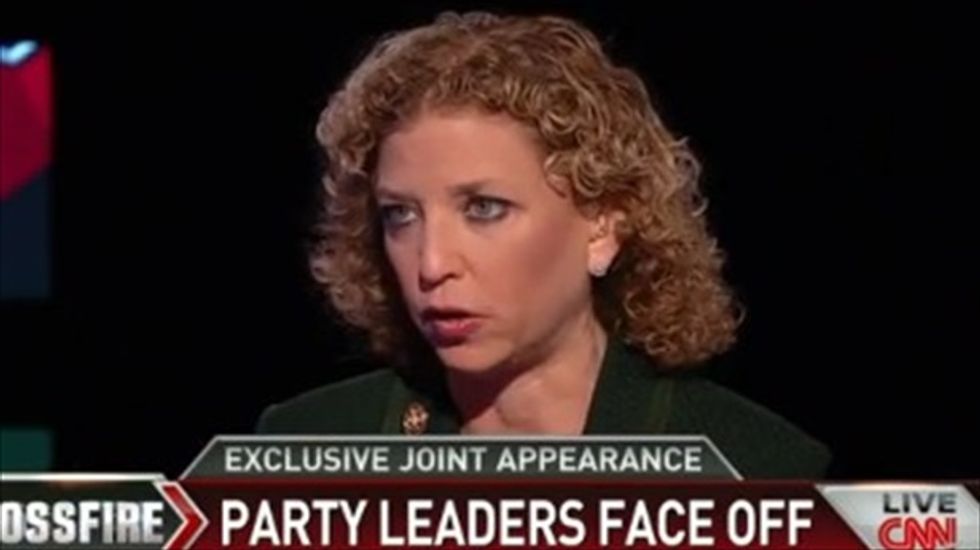 "Democrats like to complain about a Republican 'war on women,'" Gingrich said on Crossfire, before mentioning Biden's visit to a Japanese e-commerce company, DeNA, in which Biden asked a group of women working there if their husbands "like them working full-time," if they were married, and if they were allowed to work from home.

"How do you explain Biden's inability to stay in touch with reality?" Gingrich asked Wasserman Schultz, who expressed amazement that Gingrich would link the "war on women" term with Biden, the author of the Violence Against Women Act, which was been staunchly opposed by Republicans even after passing in the House in February 2013.

"Your party spent two years holding back on bringing the reauthorization of the Violence Against Women Act to the floor," Wasserman Schultz responded. "Your party has nominated, consistently, the likes of [Pennsylvania Gov. Tom] Corbett in Pennsylvania, who famously said, 'Well, if women don't want to have an ultrasound when they have an abortion, they can just close their eyes.'"

Schultz also pointed out that another Republican, Virginia Attorney General nominee Mark Obenshain, introduced legislation four years ago that would have required pregnant women to report a miscarriage to authorities.

"If you want to talk about the war on women -- and that's just a couple of examples --" Schultz said, before getting cut off by Gingrich.

"I understand your version of reality," Gingrich shot back, before being interrupted himself by co-host Stephanie Cutter.

"That's not a version of reality, Newt," Cutter chimed in. "Those are facts."

Instead of explaining his remarks against Biden, Gingrich brought up the decision by the American Association of Retired People (AARP) to stop covering treatment at the H. Lee Moffitt Cancer Center in Tampa, blaming it on the implementation of the Affordable Care Act, commonly known as "Obamacare."

"You go around the company and talk about people who can't get cancer treatments," Gingrich told Schultz. "I would suggest to you that in many ways, Obamacare is a war on people with critical diseases."

Watch the exchange, as aired on Tuesday on CNN, below.