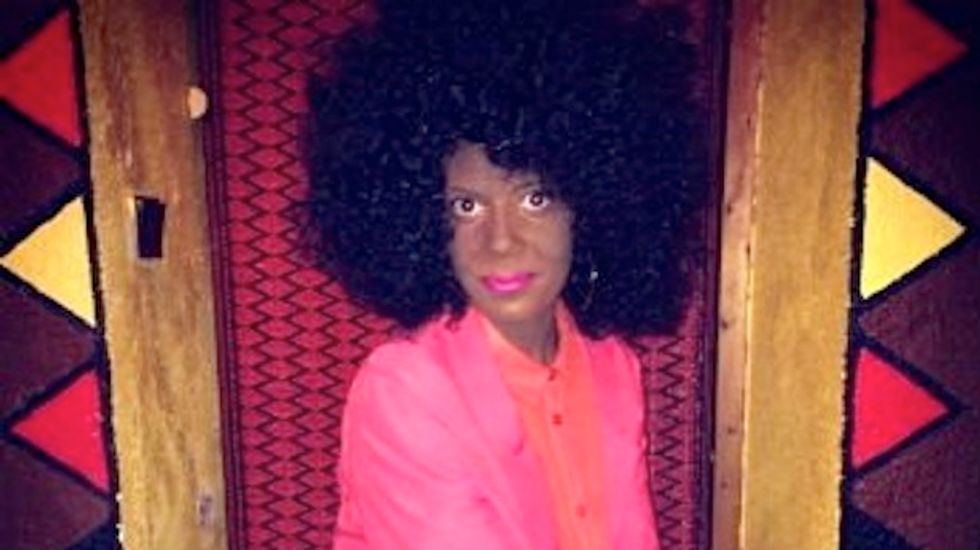 In the latest racism outcry to rock France, a French lifestyle journalist posted a photograph of herself in blackface, sparking howls of protest on social media sites -- and some bewilderment over the uproar in her native France.

Jeanne Deroo, a beauty editor at Elle France, posted a photo on Instagram last weekend, which featured her with darkened skin and an Afro wig – an image disconcertingly reminiscent of the theatrical blackface makeup popular in the 19th century.

In the post-Civil Rights era, of course, the caricatured stereotype of a bygone epoch of minstrel shows is considered highly offensive in the U.S. and in Britain, where the tradition persisted longer.

So, it was not long before a fashion website discovered the image, posted and blasted it on Twitter – and triggered a storm of cyber-outrage.

Within days, the Elle France editor issued an apology, maintaining that she was not aware that the picture would be considered offensive.

“I realize how much the fact of painting oneself brown is an offensive act. I didn’t realise the seriousness of my action when I went to a private party last Saturday evening,” said the English translation of her apology, which was posted on Twitter.

The statement proceeded to explain the context surrounding the incriminating image before ending with an apology: “I deeply regret and would like to present my apologies. I would also like to indicate that this picture, published in a private context, does not in any way involve the Elle France magazine I work for, and I am sorry for the prejudice it has caused.”

But the apology apparently failed to hit the mark – especially among English-language netizens.

“Dear Elle France editor, yes, blackface is still offensive, and no, it’s not OK,” read the headline of a column in the British daily, The Telegraph, which was circulated on social media sites.

Another Twitter posting noted, “Getting the impression that Europeans especially love blackface ... Colonial legacy or something, idk [I don’t know].”

Deroo’s blackface controversy came a week after a UN human rights panel called on the Dutch government to ensure that critics of popular Christmas figure “Black Pete” are allowed to express their opinions.

The latest twist in the Black Peter controversy was sparked when a UN working group earlier this month announced that it was investigating the Dutch custom of white people wearing blackface makeup to depict “Zwarte Piet” -- a bumbling, black character who assists “Sinterklaas” (Santa Claus) in Dutch Christmas lore.

The backlash against critics of Zwarte Piet has been vitriolic, with acrimonious outcries on the Dutch airwaves and death threats circulating on social media sites.

Defenders of the Black Peter tradition reject the suggestion that the character is racist and believe the opposition to the well-loved character is a case of extreme political correctness by an oversensitive minority. In a nation of around 16 million people, a recent Facebook page defending Black Peter had 2.1 million “likes” at the time of publication.

While the majority of Dutch Zwarte Piet-supporters are defensive about their traditional blackface character, in France, the Twitter outcry over Deroo’s party makeup was largely greeted with astonishment.

The word “blackface” has no equivalent in the French language and many French people were submitted to a crash course on racial sensitivities in what they call “the Anglo-Saxon” world last week.

"In France, the question of blackface does not immediately arouse the same reactions as in the U.S., where it has a particular historical context. But it is shocking nonetheless,” said Pap Ndiaye, a historian at the Sciences-Po university in Paris who specialises in African-American history.

This is not the first time the French fashion industry has been accused of racism.

Last year, Elle France had to apologize for an online article that noted that Barack Obama’s ascent to the White House gave the black community the impetus to dress in “chic” rather than “streetwear” clothes. “In 2012, the ‘black-geoisie’ has integrated all the white codes ... but with a twist, bourgeois with an ethnic reference that recalls their roots,” wrote French style commentator Nathalie Dolivo.

The suggestion that black people had only just discovered a chic look, which required the use of a “white” code -- whatever that may be -- forced Elle France’s editor to issue an apology in a primetime interview on French TV.

Racism has turned into a topic du jour in France in recent weeks following a series of racist attacks against France’s most prominent black politician, Justice Minister Christiane Taubira.

A day after prominent black newsreader Harry Roselmack published an opinion piece in the leading French daily, Le Monde, accusing France of harboring “deep-seated racism,” Justice Minister Taubira expressed concern over the lack of a public outcry over a series of incidents in which she was compared to a monkey.

In an interview with a left-leaning daily, Taubira recounted how she was taunted with a banana by a 12-year-old at a street protest. Weeks later, a far-right weekly published a cover of the 61-year-old politician with the title, “Crafty as a monkey, Taubira gets her banana back”.

In French, the phrase, “to get your banana back” also means putting a smile back on your face.

The word-play was not appreciated across large swathes of French society, with leading politicians across political lines denouncing the racist slurs.

On Saturday, thousands of people are expected to take to the streets in cities across France in nationwide anti-racism rallies. More protests by youth groups have been set for December 8.

But while Taubira’s recent experiences have put the spotlight on racism in France, Deroo’s admission that she was not aware that blackface makeup is offensive underlines the fact that the issue needs to be addressed in a country that proudly bears the national motto “Liberty, equality, fraternity”.

The widespread ignorance about the offensiveness of blackface in France is revealing, according to Ndiaye. "These events do not mean that the people are ideologically racist. Structural racism means that there is no moral condemnation of such people. This journalist is the product of a social world that produces representations of this genre,” said the French historian and sociologist.

There has been growing criticism of the increasing racism in the fashion industry, with a number of observers and former supermodels noting that racial diversity in the glamour business today has declined since the 1980s.

For Ndiaye, the structural racism in France stems from the fact that the country’s elites are too homogeneous – in other words, too white.

"It is high time that the editors are open to journalists of different origins, including Afro-Caribbeans and Asians,” said Ndiaye. “It’s high time the composition of the country’s elites matches the reality of French society. But today, professional access is closed to people who do not have the right look.”