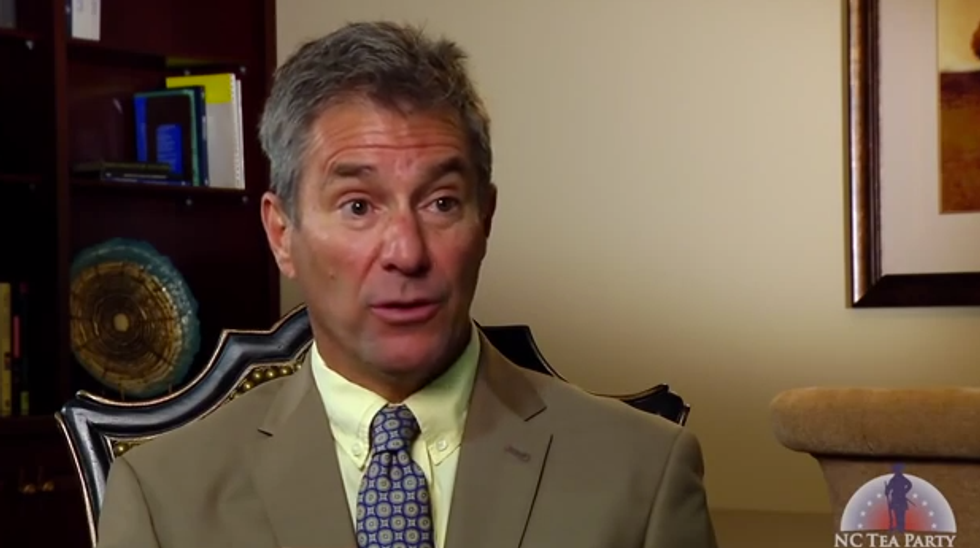 A tea party candidate whose role model was an unrepentant segregationist and has spoken to a group that supports Southern secession said he’s eager to join the U.S. Senate’s “wacko bird caucus,” and he’s got some big-name supporters.

Republican Greg Brannon said he moved to North Carolina due to his admiration for the late Sen. Jesse Helms, and he vowed to emulate the obstructionist conservative if he can unseat Democratic Sen. Kay Hagan next year.

During his time in public office, Helms fought against interracial marriage, held up disability rights legislation and funding for HIV prevention, opposed a bill establishing a national holiday for Martin Luther King Jr. and never renounced his support for racial segregation.

Brannon, who calls the late senator a “modern hero,” is the first non-incumbent 2014 candidate endorsed by Sen. Rand Paul (R-KY), and he has also picked up endorsements from Red State editor Erick Erickson and conservative provocateur Ann Coulter.

Despite the high-profile plaudits, Brannon faces long odds in the GOP primary, where he’ll face four candidates, including North Carolina Speaker of the House Thom Tillis – although a recent survey conducted by Public Policy Polling found he was the only Republican candidate who beat Hagan in head-to-head matchups.

If he makes it that far, Brannon would fit right in with the Senate’s tea party-backed “wacko birds,” Sens. Ted Cruz (R-TX) and Mike Lee (R-UT).

Brannon cosponsored and spoke at a rally in October supporting nullification – the idea that states can invalidate any federal laws they wish – that was also sponsored by the secessionist League of the South group that is seeking “a free and independent Southern republic.”

The group complains on its website that the federal government has since 1861 – the start of the Civil War -- attempted to strip states of their individual sovereignty and compromised individual religious expression and freedom of association.

“We envision the States peacefully and lawfully exercising their Right of self-determination and withdrawing from the present union dominated by an aggressive, centralized federal government; only then can a true constitutional republic, founded upon the Bible and the original constitution, once again exist in America,” the group states among its goals.

Brannon, an obstetrician and gynecologist who refuses to advise his patients on contraception or abortions, said the Supreme Court has claimed powers it doesn’t have.

"Just because nine people in black robes, seven of them voted that abortion is in the Constitution, it does not make that law,” Brannon said.

He advised state Rep. Paul Stam on anti-abortion legislation in 2011 that requires women to wait 24 hours for elective abortions after their first visit to an abortion provider and mandates sonograms of the fetus even if not medically necessary.

Brannon said he favored a version of the bill that would have required abortion providers to give women printed materials that claimed “the life of each human being begins at conception,” and he also wanted patients to be told that abortion is linked to breast cancer.

The American Cancer Society, the National Cancer Institute, and the American College of Obstetricians and Gynecologists have dismissed the possibility of a link between breast cancer and abortion.

The bill was eventually passed, but without the provision warning of a link to breast cancer.

Brannon serves as medical director for Hand of Hope, a nonprofit organization that operates several crisis pregnancy centers in North Carolina, and he recently described the clinics’ patients as “little girls” who don’t understand their own bodies.

"When I see little girls that come here, boyfriends that do show up are my favorites,” Brannon said. “Then I can whoop on them with love. How many people have we got married over the last 20 years just by riding that boy's rear end?"

The organization’s website makes false claims that morning-after emergency contraceptive pills cause abortions and discourages their use.

Brannon has raised just $250,000, mostly from individuals, and less than one-third what Tillis has raised – and that’s not including the quarter million dollars that the North Carolina House Speaker had loaned himself.

But the tea party conservative claims that he’s building a diverse coalition that will deliver him to the U.S. Senate.

Watch an interview with Brannon posted online by NCTeaPartyTV:

Protests erupted in response to the fatal police shooting of Daunte Wright, who was pulled over for an expired license plate. The officer in question allegedly shot Wright by accident, after she raised her gun hand instead of her taser hand. This explanation has immediately raised questions, given that police generally having training and protocols to avoid firing the wrong weapon.