Men Do Not Need Guns Or Violence To Be Men 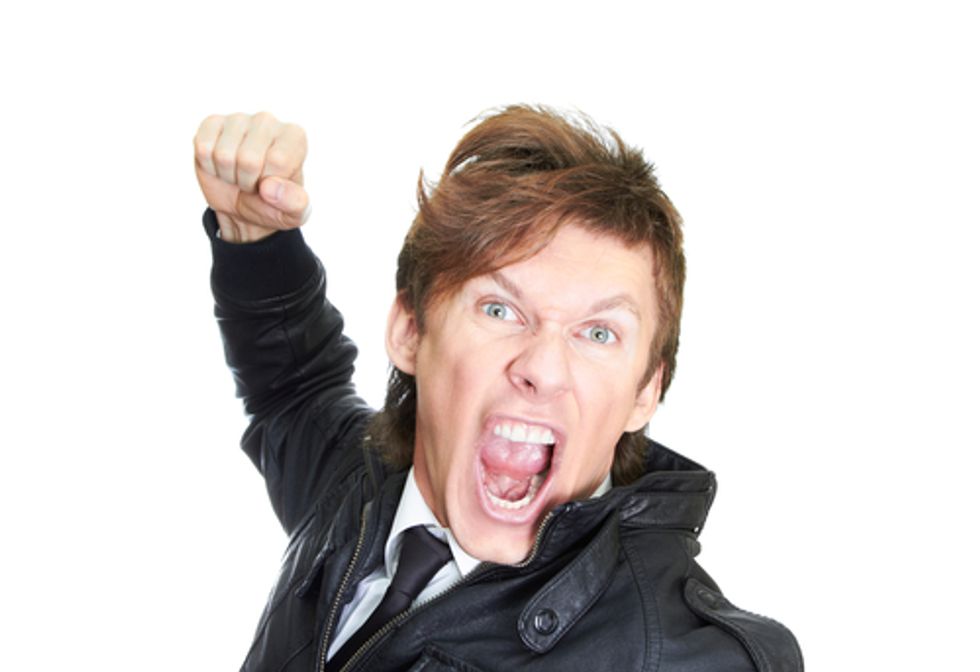 For all the reasons Adam Weinstein notes here, I'm not going to give this gun seller a video embed for the ad they're pretending was too hot for the Super Bowl, one that suggests that the AR-15 is good for baby-and-wife protecting. (In reality, as Adam Lanza demonstrated, it's an extraordinarily capable tool of taking 20 lives of small children in the space of a couple of minutes.) If you must watch it, I recommend mentally changing the words "protection" and "defend" to "dominating" and "controlling", because really, that's what the hyper-masculinity this ad is promoting is truly about. Its suggestive nature is utterly evident in the effect it had on Andrea Tantaros, who got quite excited talking about how she thinks the NFL is "feminized" now, despite the, uh, lack of actual female-gendered people who play the sport.

I suspect she and her audience feel this is a rousing defense of masculinity, but really it reads as a fascinating deconstruction of it. Who would want to have anything to do with masculinity as she portrays it, which is so fragile that you lose it at the slightest provocation? You're no longer a man if you care about breast cancer. Or if you think that people generally (including men) should get health insurance. If you think that it sucks that people get sick and would like them to be healthier, then you are, by her estimation, no longer a "man", but a child who has to play with a Nerf ball in a bouncy castle.

In other words, the only way a legitimate man can "care" about people is as objects that you fantasize about bad guys trying to steal from you so that you have an opportunity to shoot them. (After all, the chance of a family member getting sick is exponentially higher than of them being attacked in their own home in such a way that you'll be able to intervene effectively with a gun.) Worrying about their health, which creates no opportunity for murder fantasies, makes you a lady. Or a child. They seem to be the same thing in this construction.

Of course, the claim that it's a lady thing to care about gun violence is fucked up in the extreme. I mean, everyone should care about gun violence, but statistically speaking, it's really a men's issue. There are way more male victims than female victims who die from gunshots. Since the Newtown shooting, there have been a recorded 9,406 boys and men dead from gunshot and a relatively but dramatically fewer 1,702 women. Most perpetrators of gun violence are men. Most victims of gun accidents are men. Most suicides by gun are from men. A large part of the reason for this is the attitude that Tantaros is endorsing up there: That men "prove" their manhood by having guns, by acting tough, by seeking out violence, by pretending they don't care about anything but creating more opportunities for violence. Particularly with regards to the young men who kill each other in regular street and gang violence, most if it stems from this fucked up definition of masculinity that is centered around trying to prove that you're a dominant person and tougher and more violent than everyone else. As this excellent examination in Wired regarding the horrible gun violence in Chicago argues, most of the murders and other attacks are from young men taking issue at slights against their manhood and trying to reestablish it through the means promoted in the ad and this Fox News segment: gun violence.

The obvious solution here is to stop seeing "masculinity" as a thing. Sometimes you see people try to "redefine" it, but the problem is that the concept of masculinity primarily exists in opposition to femininity. So to say, "Why not make masculinity about being honorable, mature, and noble?", you're implying, even if you don't mean to, that women cannot have those traits. Indeed, one reason that those are considered traits of a more old-fashioned kind of masculinity---though masculinity has always had a "quick to violence" aspect to it, make no mistake---is because women weren't permitted to have those traits. A better solution is to get rid of the notion of masculinity altogether. Instead, let's just be people. And, as a side benefit, that strategy allows us to dispense with the idiotic notion that an NFL player's manhood is somehow at stake because he doesn't want his mom or his wife to die of breast cancer. A man can just be a man, without having to prove it all the time at the expense of his own humanity.