'My heart feels like it's about to 'splode': Designer creates video game marriage proposal 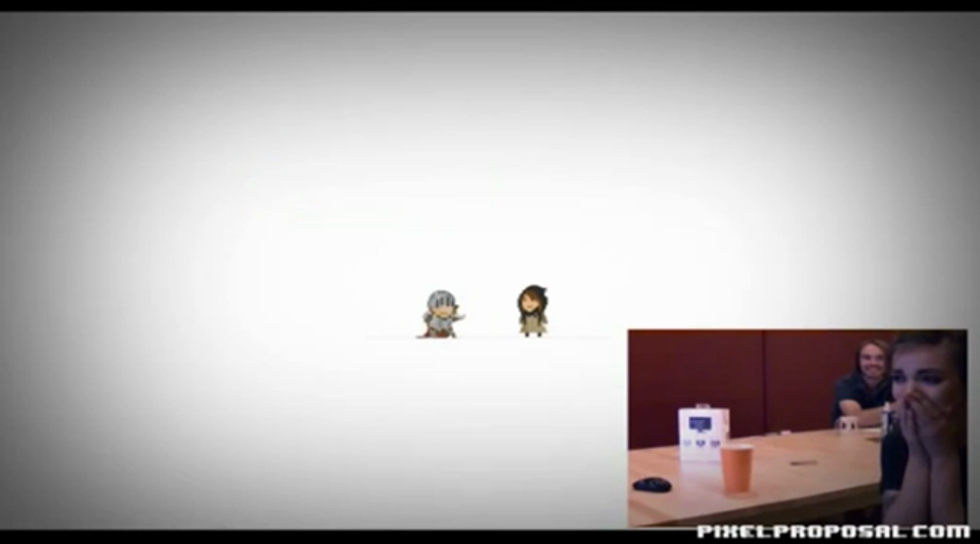 An Oregon web developer spent five months crafting a marriage proposal to his girlfriend through a video game.

Robert Fink said he stayed late to work on the game about once or twice a week with his colleagues at a Portland graphics studio.

"I told her that SuperGenius, the company that I work at, was working on a simple platformer pixel art game,” Fink said. “I planted the seed early on in her head so that when I brought it up later that she needed to test it, it wouldn't be out of the blue.”

Fink, a 3D artist, created the art design for the game, while one friend programmed it and another put together the music.

His girlfriend, Angel White, had previously tested other products for the company, so she wasn’t surprised when he asked her to try out Knight Man: A Quest for Love.

Fink even created a tester questionnaire about the game and set up cameras to record her reaction, which was watched by friends and family in another room.

White is a skilled gamer, so she didn’t have any trouble guiding her knight character through a Super Mario-style series of adventures to collect parts of a gold ring and save a princess before Fink’s marriage proposal appeared onscreen.

"I have searched far and wide and braved many dangers searching for my one and only. I believe with all my heart that I have found you," the message read.

The proposal then appeared on the next screen.

"Angel White, will you do me the honour of sharing your life with me?"

A final screen asked White to click yes or no, and she accepted his proposal.

“She is nearing the whole end sequence and my heart feels like it's about to 'splode,” Fink said in a website set up to share the proposal.

The knight then carried off the princess as fireworks exploded in the background.

"I was so excited, and so happy and nervous, and just exploding with emotion," White said. "It was awesome and then just realizing that he made this, it was incredible."