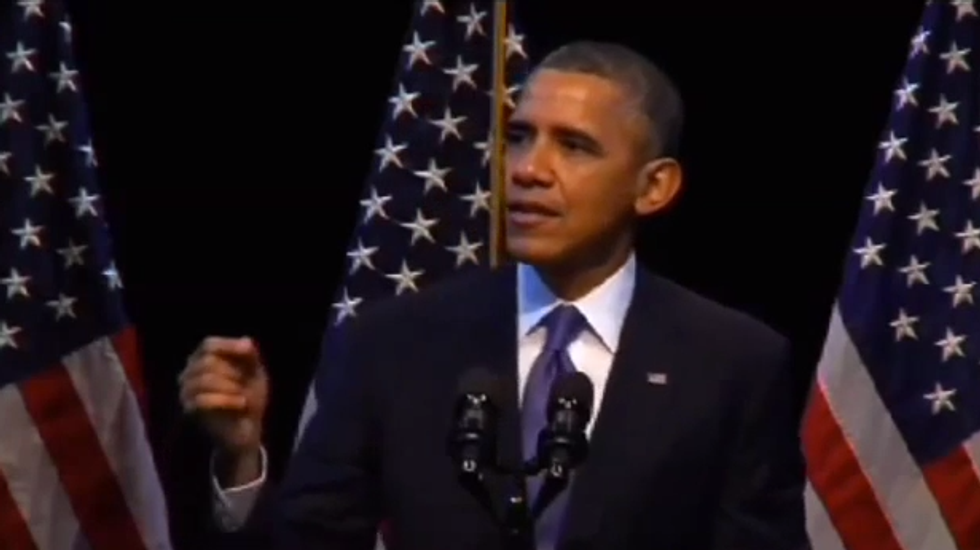 Conservatives angered by Pope Francis’ recent attacks on capitalism and wealth inequality aren’t going to like hearing President Barack Obama’s approval of them.

The president said Wednesday that growing income inequality had “frayed” the basic bargain at the heart of the U.S. economy during an event sponsored by the Center for American Progress, a liberal think tank with close ties to the White House.

“Some of you may have seen just last week the pope himself spoke about this at eloquent length," Obama said. "’How can it be,’ he wrote, ‘that it's not a news item when an elderly homeless person dies of exposure, but it is news when the stock market loses two points.’ But this increasing inequality is most pronounced in our country. And it challenges the very essence of who we are as a people."

The president noted that the American economy had doubled in size since 1979, but most of that growth has been restricted to a “fortunate few.”

“The 10 percent no longer takes in one-third of our income, it now takes half,” Obama said. “Whereas in the past the average CEO made about 20 to 30 times the income of the average worker, today’s CEO now makes 273 times more, and meanwhile a family in the top 1 percent has a net worth of 288 times higher than the typical family, which is a record for this country.”

“Understand, we’ve never begrudged success in America; we aspire to it,” Obama said. “We admire folks who start new businesses, create jobs and invent the products that enrich our lives, and we expect them to be rewarded handsomely for it. In fact, we’ve often accepted more income inequality than other nations for one big reason because we were convinced that America is a place that even if you are born with nothing, with a little hard work, you can improve your own situation over time and build something better to leave your kids.”

But he said that children born into the bottom 20 percent have a less than 5 percent chance of making it to the top, while a child born in the top 20 percent has about a 2-in-3 chance of staying there.

“As Lincoln once said, ‘While we do not propose any war upon capital, we do wish to allow the humblest man an equal chance to get rich with everybody else,’” Obama said. “The problem is, that alongside the increase in inequality, we’ve seen diminished levels of upward mobility in recent years.”

The president said lawmakers must raise the minimum wage to ensure the economy benefits all workers, saying that income inequality had jeopardized the middle class.

"The combined trends of increasing inequality and decreasing mobility pose a fundamental threat to the American dream," Obama said.

He said that Americans should be offended that U.S. children born into poverty had little chance of escaping it, no matter how hard they worked.

"It should compel us to action,” Obama said. “We're a better country than this.”