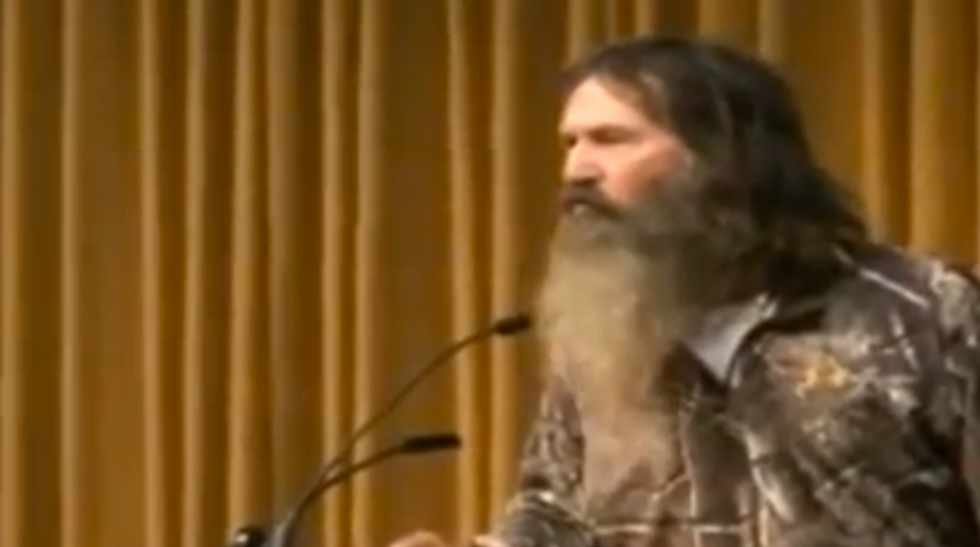 TMZ posted a video Thursday afternoon that shows Robertson, who was placed on indefinite hiatus by A&E for anti-gay and racist remarks in a magazine interview, delivering an anti-gay sermon at Berean Bible Church in Pennsylvania.

"First they say, 'There is no God. Get him out of your mind,'" Robertson said, waving a Bible. "Then they bow down to birds, animals and reptiles, and each other, and the first thing you see coming out of that book is gross sexual immorality.”

“They will dishonor their bodies with one another, degrade each other,” Robertson said. “Is that going on in the United States of America? Look around. God's not there, we have all the answers – don’t hurt a little bird or an animal – and, boy, is there some immorality going on around here. Does it get worse?"

After Robertson’s suspension cast the future of the popular reality TV show in doubt, conservatives leapt to his defense, saying he had a right to express his religious beliefs without interference.

For example, a photo of Robertson was passed around on social media, complaining that the media hadn’t presented the full context of his comments in the magazine article.

“We never, ever judge someone on who’s going to heaven, hell,” the graphic quotes from the article. “That’s the Almighty’s job. We just love ‘em, give ‘em the good news about Jesus – whether they’re homosexuals, drunks, terrorists. We let God sort ‘em out later, you see what I’m saying?”

But the recently publicized sermon, which was delivered almost two years before “Duck Dynasty” first aired, adds even more context to Robertson’s comments and his beliefs about same-sex relationships.

"Women with women, men with men, they committed indecent acts with one another, and they received in themselves the due penalty for their perversions," Robertson said. "They're full of murder, envy, strife, hatred. They are insolent, arrogant, God-haters. They are heartless, they are faithless, they are senseless, they are ruthless. They invent ways of doing evil. That's what you have 235 years, roughly, after your forefathers founded the country.”