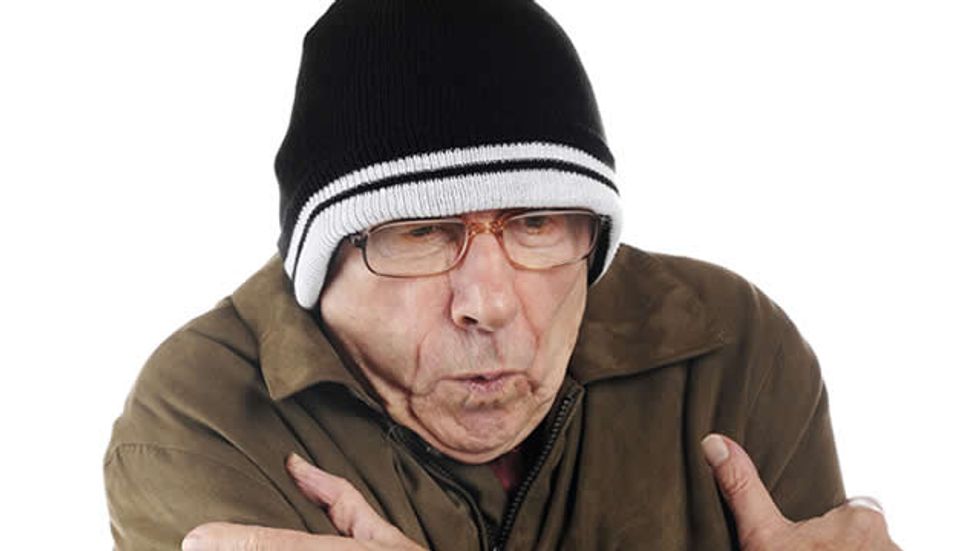 A senior man in ski cap and thin jacket shivering from the cold via Shutterstock.com

A steakhouse in Nashville has responded to complaints that its staff forced a cancer patient to remove his hat over the weekend because he did not have a note from his doctor.

According to WZTV, the controversy started when a group of 16 people were finishing up a $2,000 company Christmas dinner at Morton's Steakhouse when one man, who is being treated with chemotherapy and is sensitive to the cold, decided to put on a wool cap for warmth.

"When he put on a wool beanie in the restaurant to keep warm, he was immediately asked to remove it... which he did," Amanda W. explained in a Yelp review. "When his family mentioned his condition and questioned the treatment from Catrina, the assistant manager, they were told he could wear it if he presented a doctors' note... or if we had given them previous notice so we could be accommodated elsewhere. (Out of sight, out of mind?)"

"In short, what followed was shock/disbelief (can't say that I blame them) and the cops being called (huh?), and we were (all 16 of us) asked to leave," she said.

Ashley S., who was also at the dinner, told a very similar story in her Yelp review.

"I understand there are rules at establishments...I get it, really. But when we are there, spending a few thousand dollars, and one of the men in the group who is battling cancer and has an extreme sensitivity to cold, decided to slip on his black wool beanie (AT THE END OF THE MEAL mind you...) he was told to take it off, which he did," she wrote. "Upset, his son decided to tell the manager Catrina that his dad has cancer, etc...well her response was he needed a DOCTOR'S NOTE. Are you kidding me??? His wife then got extremely upset, and the family got up to leave...not before speaking with the management. They told them they should have called in advance so they could have put us in a room by ourselves...we didn't realize cancer was so offensive!"

"And not to mention, they called the police on them! When another owner who happened to be the one paying the ridiculous bill went to speak with the manager, he was thrown out by police. Then we all had to leave, because they couldn't handle us all being upset."

Morton's Steakhouse responded in a message posted to Facebook: "We are aware of the situation that happened at our Nashville location over the weekend. We appreciate you all bringing it to our attention, and we have reached out to the parties involved and can assure you that all facts will be uncovered."

[Photo: A senior man in ski cap and thin jacket shivering from the cold via Shutterstock.com]