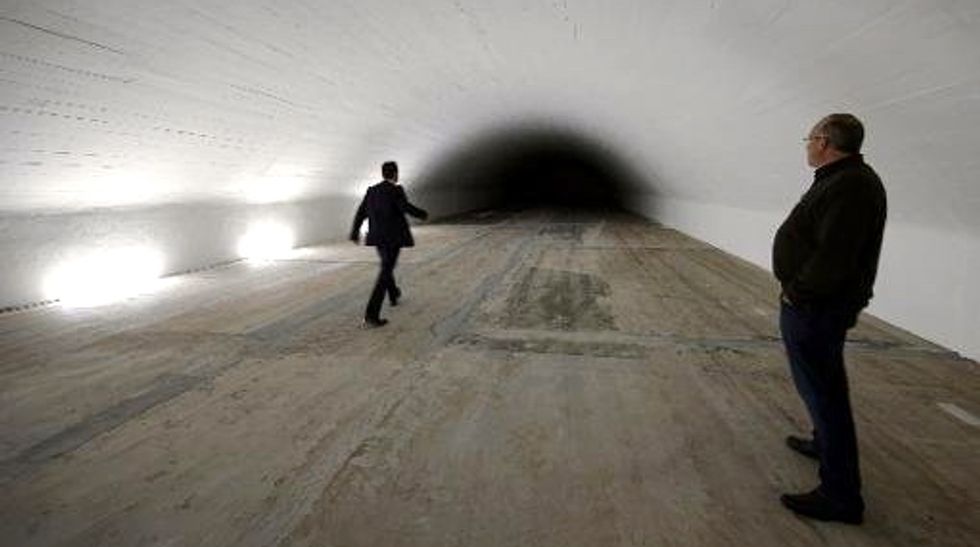 It looks like the ideal location for a James Bond thriller: a massive underground bunker in a secret location in the Swiss Alps used for keeping data safe from prying eyes.

Housed in one of Switzerland's numerous deserted Cold War-era army barracks, the high-tech Deltalis data centre is hidden behind 4-ton steel doors built to withstand a nuclear attack -- plus biometric scanners and an armed guard.

The centre is situated near the central Swiss village of Attinghausen, but its exact GPS location remains a closely guarded secret.

Such tight security is in growing demand in a world still shaking from repeated leaks scandals and fears of spies lurking behind every byte.

Business for Switzerland's 55 data centers is booming. They benefit from the Swiss reputation for security and stability, and industry insiders predict the wealthy Alpine nation already famous for its super-safe banks will soon also be known as the world's data vault.

Revelations from former US intelligence contractor Edward Snowden of widespread spying by the National Security Agency has served as "a wake-up call" to the dangers lurking in this era of electronic espionage, said Deltalis co-director Andy Reinhardt.

That danger is clearly something his company takes seriously.

To enter the 15,000-square-meter bunker that once served as the Swiss army's secret headquarters one must first hand over an ID card, leave a biometric scan, go through a hyper-sensitive security portal, and finally push past an anti-nuclear steel door.

From there, a maze of concrete tunnels and corridors covered with Cold War-era military maps and dotted with large pools storing underground water lead to the 600-square-meter Deltalis data centre.

Located 200 meters inside the mountain and 1,000 meters below the peak, the pristine, white, almost futuristic room in use since 2011 houses row upon row of humming data storage systems.

The machines continuously gather and store data from individuals or companies willing to pay an undisclosed price to ensure their precious information will not be lost to power cuts, earthquakes or terrorist attacks, and will remain safe from would-be intruders.

Snowden's disclosures that online behemoths like Facebook, Google, Skype and Yahoo have assisted the NSA and other agencies in their snooping by handing over user data have certainly proved a boon for companies like Deltalis.

"I have two positions: one is that I am a citizen of a European country and I find it unbelievable what the Americans are doing," said Christoph Oschwald, the co-director of Mount10, another data centre housed inside a Swiss mountain.

But from a business perspective, he added, "It's fantastic! ... It has tripled the business within a very short time."

While the global data storage industry is ballooning, companies in Switzerland, which has some of the world's strictest data protection laws, are especially reaping the benefits of the atmosphere of paranoia.

Under Swiss law, personal data is defined as a "precious good" that can under no circumstances be handed over to governments or authorities without authorization from a judge.

And although Switzerland's reputation as the land of tight-lipped confidentiality has taken a bit of a hit with the ongoing erosion of its bank secrecy practices, it remains miles ahead of most other countries in terms of data protection, according to Peter Gruter, the head of the Swiss Telecommunications Association.

"In other countries, all kinds of institutions have access to these data, but here you need permission from a judge. That is a great advantage compared to, for instance, the United States," he said.

Susanne Tanner, who heads Swiss data centre Greendata, said many of her company's customers certainly think the Alpine country is a safer bet for their data.

"Swiss companies using servers abroad want to return them to Switzerland, and companies from abroad have begun evaluating Switzerland as a potential place in Europe to conduct their data management," she said.

"Clients have become more sensitive to the issue of data protection. Several have asked us to bring their data back to Switzerland," he said.

The electronic spying revelations have also loosened many purse strings, according to Oschwald of Mount10, who is thrilled that people have finally stopped asking why they should pay for a data storage service they could get for free from the likes of Google and Apple.

For the past four months, he said he hasn't heard that question once: "Now people know that if it is free, I can?t complain if they are using my data for whatever they want."