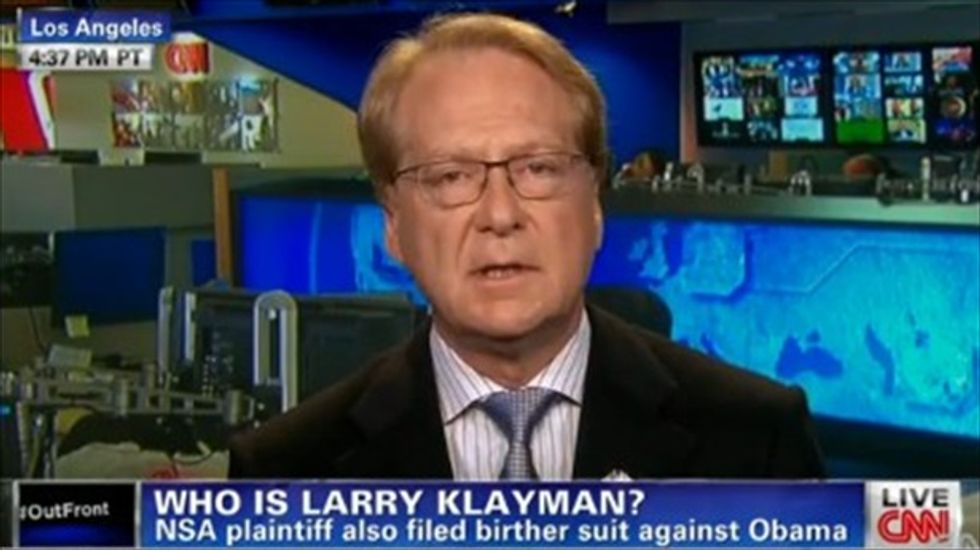 Tea Party activist Larry Klayman took offense to CNN reporting on his long history as a "professional litigant" against three different presidential administrations on Tuesday, leading to his interview with anchor Don Lemon degenerating from the outset.

"It's important to note that you're a big supporter of [President Barack] Obama," Klayman told Lemon. "You have favored him in every respect. You have to try to do a hit piece to diminish a very important decision."

"Are you talking about me, personally?" Lemon asked, cutting in.

"You can continue on. None of that is true, but go on," Lemon retorted, waving his hand.

"It is true, Don. I've watched you for many years," Klayman said. "You're an ultra-leftist and you're a big supporter of Obama."

A federal judge ruled in Klayman's favor on Monday, ruling that the data-gathering operations conducted by the National Security Agency (NSA) are likely in violation of the Fourth Amendment. Klayman had filed suit challenging an April 2013 NSA demand that his phone service provider, Verizon Wireless, provide the agency with his phone records.

"This was a victory for the American people," Klayman told Lemon and legal analyst Jeffrey Toobin. "It wasn't for me. And you as somebody from the left -- and I've gotten compliments from the left the past few days, and even from the right -- should appreciate that you don't have a police state in this country that's going to be able to intimidate Americans, to chill their free speech rights, their associational rights."

However, in reporting on the story, CNN also mentioned Klayman's prodigious past and various lawsuits against the Clinton, Bush and Obama administrations, including his suit saying Obama had "not been confirmed" as being born in Hawaii, despite it being confirmed on multiple occasions.

But instead of talking about the NSA lawsuit, Klayman argued, CNN preferred "to take out somebody who's gonna challenge President Obama." In October, Klayman demanded during a Tea Party rally that Obama "put the Quran down, get up off his knees, andfiguratively come out with his hands up" from the White House.

"I'm not here to get into an argument with you," Lemon told Klayman. "Nothing you have said has been correct about me or the reason we're doing this story. You can continue to attack me or attack CNN or whatever you want to do but let me just say this: the only person who decides my political leanings, whether I'm left or right, [is] me."

"You know what, Don? I'm not attacking CNN," Klayman responded, as Toobin waved in the background, saying, "pick me" after going silent for the segment up to that point.

Watch the interview, as aired on CNN on Tuesday, below.