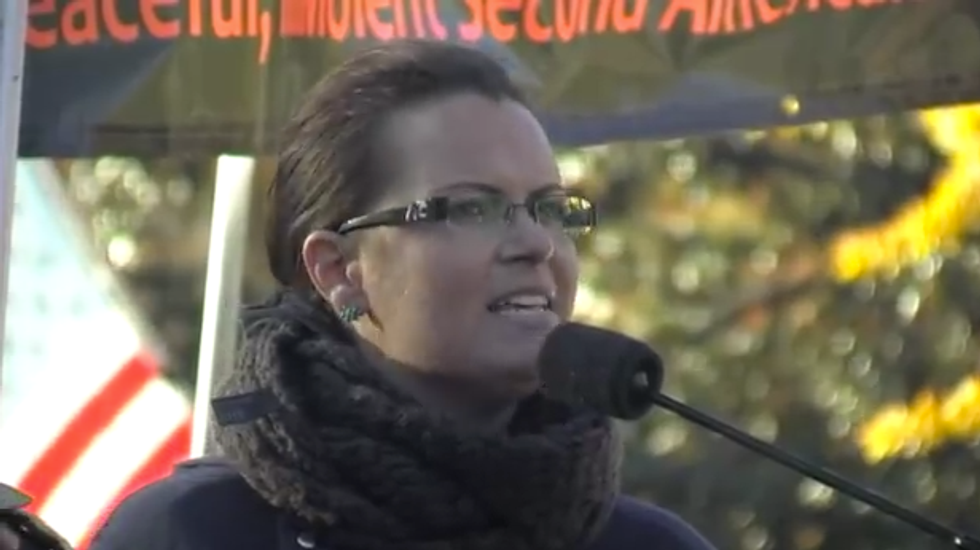 A tea party activist suggested the United States may be conquered by foreign armies because abortion and Islam were permitted.

Brooke McGowan, who was introduced as a representative of the Tea Party News Network, told the Reclaim America rally on Nov. 19 that the U.S. faced judgment for its religious tolerance.

“In this nation we have turned away from the God of the Bible and we’ve told him he’s simply not welcome here,” McGowan said. “We have welcomed pluralism, atheism, secular humanism, Wicca and even Islam.”

She said the nation's downfall began 50 years ago, when public school-sponsored prayer was limited and continued 10 years later when abortion was legalized.

"We sacrificed 55 million children in 40 years to the god of convenience and self-importance," McGowan said. "The tune of 55 million. That's our children, that's our people; that's Americans. Fifth-five million Americans have been tossed into the fire, the Dumpster and the toilet."

She grew nostalgic for the weeks immediately following the terrorist attack on Sept. 11, 2001, when she noticed a lot of religious and patriotic messages in Pensacola, Florida, where she lived at the time.

“Everywhere you looked, every marquee, every sign in the yard, every flag, the signs would say, ‘God bless America’ or ‘God bless our land,’” McGowan said.

But she said Americans failed to heed the message God was sending them.

“Our national security was breached on 9/11 and yet no repentance came,” McGowan said. “Then financial devastation hit seven years later; still no repentance. Chance after chance to change, yet we still hoist our fist in his face.”

McGowan noted that the financial meltdown also began in September, seven years after the 9/11 attacks, and she suggested that this was no coincidence and possibly foretold additional calamity.

“What will be our future in September of 2015, another seven years, if we don’t repent?” McGowan said. “Will we be overtaken militarily, because that’s what the signs lead to. If there is no repentance, hear me, there is no salvation. Change of destiny requires a change of course.”