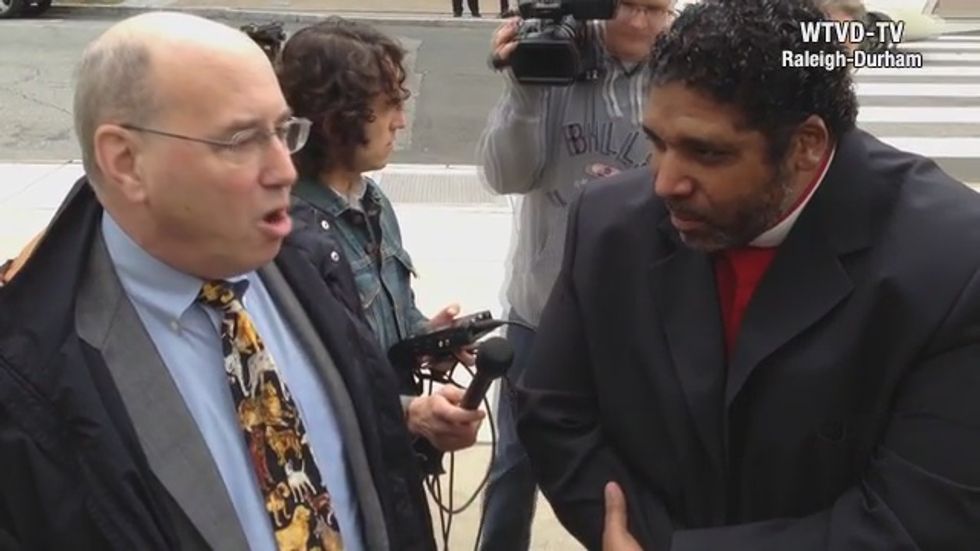 North Carolina NAACP President Rev. William Barber on Monday confronted the man who he says is responsible for pushing policies that have been devastating poor and minority communities in the state.

After a press conference announcing plans to picket retail stores owned by Art Pope, the businessman himself stepped in front of cameras to defend his companies before coming face to face with Rev. Barber. Pope serves as Gov. Pat McCrory's (R) state budget chief and is a close ally of billionaires Charles and David Koch.

In an interview on Tuesday, Barber explained to Raw Story that activists had planned to picket Pope-owned stores like Roses and Maxway because he paid workers with low wages and then used the profits to fund initiatives that hurt the poor community.

"It represents the kind of new sinister and cynical abuse of wealth and power," Barber said. "When you publicly and intentionally let be known that you are placing your business efforts in poor communities and communities where the median income is $40,000 or less and 25 percent or more African-American, and then you pay people low wages and you sell your goods to people who are poor, and then you turn around and use the wealth generated by those low-wage workers and those poor people to support promote and push policies that are diametrically opposed to their social uplift and to their community uplift, that is just cynical and sinister in many ways."

"And then when you look at this governor and legislature's denial of access to 500,000 people Medicaid expansion, you see the handprints and the philosophical imprint of Art Pope or groups that he funds," he continued.

Barber connected Pope to the denial of unemployment benefits for 700,000 North Carolinians, tax cuts for the wealthy, sales tax increases that hurt the poor, massive cuts in education, recent gerrymandering and "the most regressive voter suppression laws in the country... the worst thing we've seen since Jim Crow."

During their encounter on Monday, Pope had argued that he had a different way of ending poverty. But Barber said he wasn't buying that.

"It almost sounds like an argument that would be put forth in the 1960s when Dr. King went to Memphis and somebody would say, 'Well, at least the garbage workers have jobs. So, Dr. King why are you here? Why are you fighting for them to have union rights? They have jobs,'" the North Carolina NAACP president noted. "It's an illogical kind of argument that I can give you a low-paying job -- that is in some ways poverty wages -- and I can extract money from your community and you should just be content even though I'm using your work to actually support programs that are detrimental to you, your community and your future."

"You know, slave masters said to the slaves, 'You ought to be happy, you've got a house or a hut, you've got some food, I'll protect you, you know, just be happy,'" Barber said. "But the framers of our Constitution said you must have more than labor, you must be able to enjoy the fruit of your own labor."

Barber has been instrumental in leading the Moral Monday protests against the Republican agenda after the party took control over the legislature and the governor's office for the first time in about a century. Protests were scheduled to resume at the State Capitol on Dec. 23.

Barber predicted that a Feb. 8 protest would be the largest since the civil rights marches in Selma, Alabama in the early 1960s.