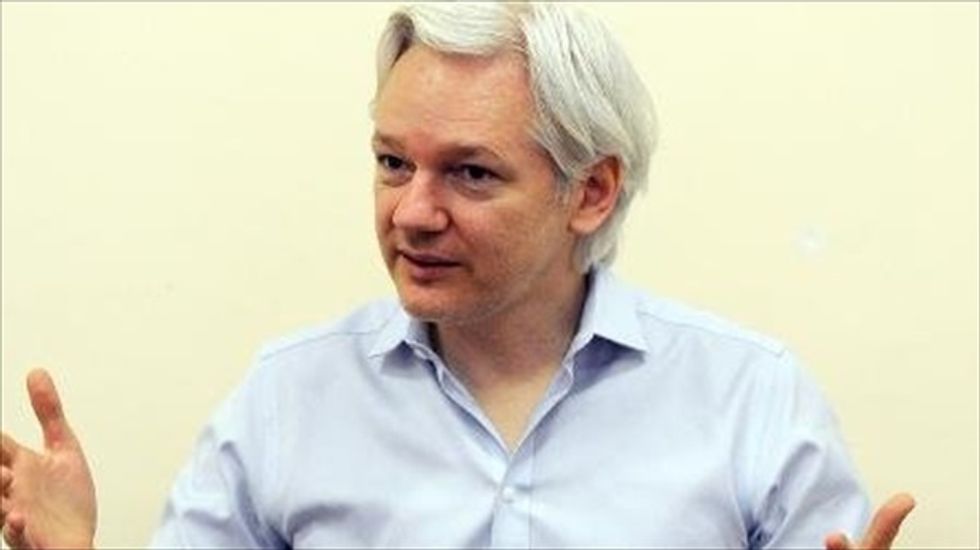 WikiLeaks founder Julian Assange has used the unlikely platform of the religious slot on the BBC's Today program to condemn attempts by US and UK governments to acquire a "god-like" knowledge of citizens through mass surveillance.

Assange, who has been holed up in an embassy in London for more than a year, delivered a sermon about the importance of freedom of information, and liberating "hoarded knowledge", in an alternative Thought for The Day on the Today Program.

He said disclosures by the security contractor Edward Snowden about the scale of mass surveillance by the US and UK security services had exposed how governments and corporations seek to "know more and more about us" while "we know less and less about them".

Assange, who has been granted asylum by Ecuador but faces arrest if he leaves the country's London embassy, was chosen to appear by Today's guest editor, musician PJ Harvey, who introduced him as a "person of great courage". She said he had "opened a door to freedom that ought to be the essence of democracy".

Assange likened contemporary mass surveillance to the way the Catholic church operated during the reformation. He said: "Through the confessional system the Catholic church spied upon the lives of its congregants. While Latin mass excluded most people who could not speak Latin from an understanding of the very system of thought that bound them.

"Knowledge has always flowed upwards, to bishops and kings not down to serfs and slaves. The principle remains the same in the present era. Documents disclosed by NSA whistleblower Edward Snowden show that governments dare to aspire, through their intelligence agencies, to a god-like knowledge of each and every one of us."

Assange cited Aristotle and passages from the Bible to claim backing for the idea that knowledge is power. "To be alive as a human being is to know, in the same way as it is to have a heart that beats," he said.

The WikiLeaks founder added: "To keep a person ignorant is to place them in a cage. The powerful – if they want to keep their power – will try to know as much about us as they can, and they will try to make sure that we know as little about them as is possible."

Assange was one of several alternative, left-leaning voices chosen Harvey. Her program also featured contributions from campaigning journalist John Pilger, an interview on torture with the Guardian's Ian Cobain; and a poem by a Guantanamo Bay inmate.

Ian Austin, the Labour MP for Dudley, described the program as the "worst ever." He tweeted: "In 30 years of listening, I already thought today's @BBCr4today was worst ever. I cldn't imagine it cld get worse. Then they put Assange on."

The singer said she was assured by the BBC that the guests she had chosen would not be edited. Harvey is one of a number of guest editors who are commissioned by the program each year over the festive period. Others in the past few days have included Tim Berners-Lee, the inventor of the world wide web, and Lady Manningham-Buller, the former director general of MI5.

Assange entered the Ecuadorian embassy while he faced extradition to Sweden to face rape allegations and he was given asylum in August 2012. In 2010, WikiLeaks shared with the Guardian and other international news organizations access to the huge trove of US state secrets leaked by the American soldier Chelsea Manning, formerly Bradley.