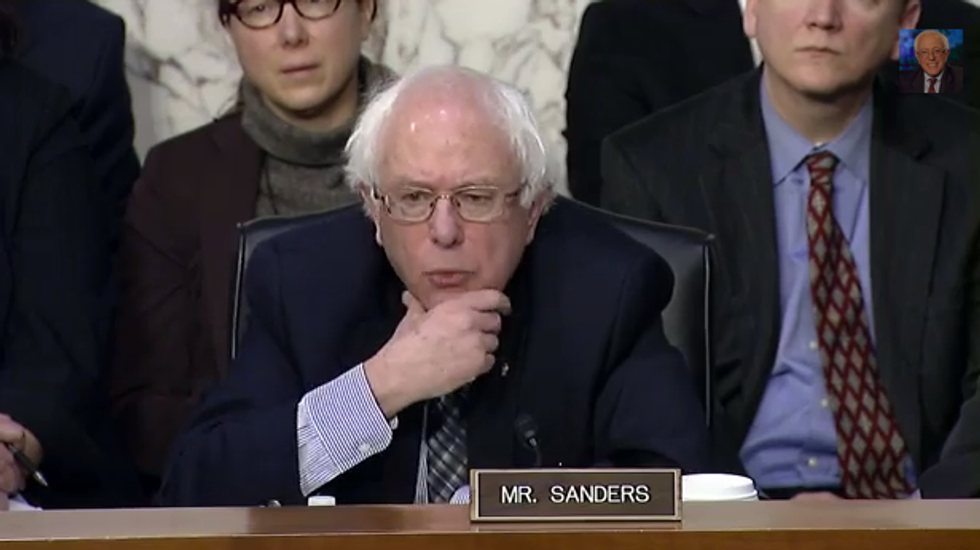 Sen. Bernie Sanders (I-VT) demanded that a panel of experts justify why America’s shrinking middle class should continue to subsidize the nation’s wealthiest family in a heated exchange Thursday during a congressional panel.

The Senate’s lone independent pointed out during the panel on income inequality that more Americans were currently living in poverty than at any point in the nation’s history as the top 1 percent siphoned off 95 percent of all income generated between 2009 and 2012.

He continued his attack on the family that founded Walmart, which drew a formal complaint Wednesday from the National Labor Relations Board accusing the retailer of illegally threatening or punishing employees who considered taking part in strikes to protest working conditions.

“The Walton family is the wealthiest family in America,” Sanders said. “Does anybody on the panel think that they need significant welfare help? And yet it turns out that they are the largest recipient of welfare in America.”

He accused the retailer of paying its employees “starvation wages,” which in turn forced working families into taxpayer-funded social welfare programs to help pay for their medical care, food and housing.

“Do you think the Walton family, worth a hundred billion dollars, is in need of welfare from the middle class of this country, or do you think maybe we should raise the minimum wage so that those workers can earn a living wage and not have to get Medicaid or food stamps?” Sanders asked the panel.

The first panelist, Scott Winship, of the Manhattan Institute for Policy Research, offered to answer an earlier question, but Sanders insisted that he justify why taxpayers should subsidize Walmart’s wages with welfare.

“I would not use the word welfare, I think it’s stigmatizing,” Winship said, adding that Walmart offered low prices to its customers.

The exchange turned testy, as Sanders continued to insist that Winship answer the question as he’d asked it.

“I think that we should not raise the wage above levels that’s going to cause Walmart to not hire their workers,” Winship said. “The only way that they’re able to have the prices, which benefit low-income people more than people up on the income distribution (scale), is by paying wages that are not as high as you or I might like.”

The next panelist, former Labor Secretary Robert Reich, said he did not think taxpayers should subsidize any corporation that failed to pay its workers enough to survive.

“That is corporate welfare of the worst kind,” said Reich, a public policy professor at the University of California-Berkeley.

“I don’t think we should be subsidizing Walmart, but I think workers have a choice about where they want to work,” Mathur said. “If they’re choosing to work at Walmart, you know, that is their choice and we should not decide for them whether it’s a good choice.”

She defended the use of taxpayer-funded social welfare programs to boost the living conditions of working families.

“These are poverty programs that benefits go directly to workers, (and) if you think that they’re creating jobs and people are able to work and enough benefits to survive, then I think that’s a good thing,” Mathur said.

Melissa Kearney, of the Brookings Institute, echoed Mathur’s comments, pointing out that dozens of candidates applied for each available job when Walmart opened its first location in Washington, D.C.

“I think Walmart is a brilliant innovation and I have no beef with the Walton family,” Kearney said. “It would be great if people could move up the wage distribution faster at Walmart and aspire to management positions and better positions for themselves and their children.”

Watch this video of the panel discussion posted online by Bernie Sanders: