Flying car set to spread its wings in Slovakia 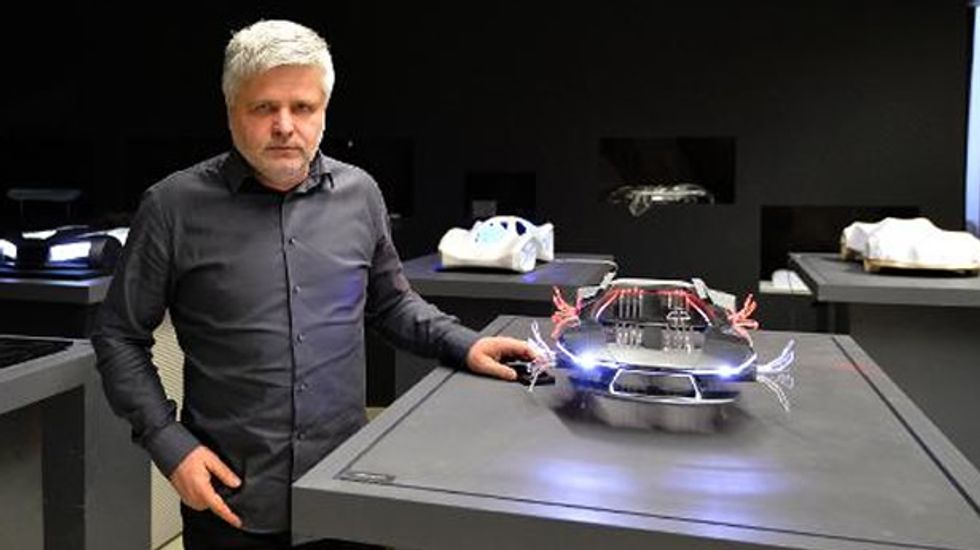 Mankind's primordial dream of flight is taking off with a new twist as a Slovak prototype of a flying car spreads its wings.

Inspired by the books about flying by French authors Jules Verne and Antoine de Saint Exupery, Slovak designer and engineer Stefan Klein has been honing his flying machine since the early 1990s.

"I got the idea to start working on a vehicle of the future at university, but honestly, who hasn't dreamt of flying while being stuck in the traffic?" Klein told AFP.

"Flying's in my blood -- my grandfather and my father flew ultra-light aircraft and I got my pilot's license before I was old enough to drive a car," said Klein, who has designed cars for BMW, Volkswagen and Audi and now teaches at the Bratislava-based Academy of Fine Arts and Design.

His elegant blue-and-white vehicle for two is six metres (20 feet) long so it fits neatly in a parking space or a garage and tanks up at any filling station. But once it reaches an airport it can unfold its wings within seconds becoming a plane.

Dubbed "the world's prettiest and best-designed airborne automobile so far" by US aviation magazine Flying and Inhabitat.com design, an innovation website, the Aeromobil also has the distinction of originating in Slovakia, the world's largest per-capita car producer.

"So far there have been about twenty attempts to manufacture a flying car around the globe," the president of the Slovak Ultra Light Aviation Federation, Milan Ciba, told AFP.

"Among them, Aeromobil appears very viable," he said.

Other models include the US-based Terrafugia's "Transition" flying car expected to be launched on the market within a year, while the helicopter-type Dutch PAL-V gyrocopter could go on sale in this year.

Klein's dream took to the skies in September when he piloted the Aeromobil during its first wobbly test flight.

"A combination of a car and a plane will always lose against the competition when we start comparing energy consumption," Jan Lesinsky from the Slovak University of Technology told AFP.

But would-be users could glide by long lines and security checks at airports, saving time on medium-distance journeys.

Klein and his team are currently working on the next generation of Aeromobil that will go into production in a few months and hopefully receive Slovak Ultra Light Aircraft Certification (SFUL).

"Pilot/drivers will need to have both a driver's and pilot's licence with at least 25 flying hours," he added.

An enthusiastic pilot himself, Klein remains down to earth when looking to the future.

"I don't expect Aeromobil to go into mass production, it will always be an alternative means of transport," Klein said.

"It can, however, be very interesting for countries with vast areas lacking infrastructure like Russia, China or Australia," he added.

Flying cars will most likely take off among pilots licensed for ultra-light aircraft, says Ciba.

"It would make their lives so much easier -- they would be able to park their car/aircraft at home, drive to the airport, take off, land and drive to their destination without switching vehicles," he muses.